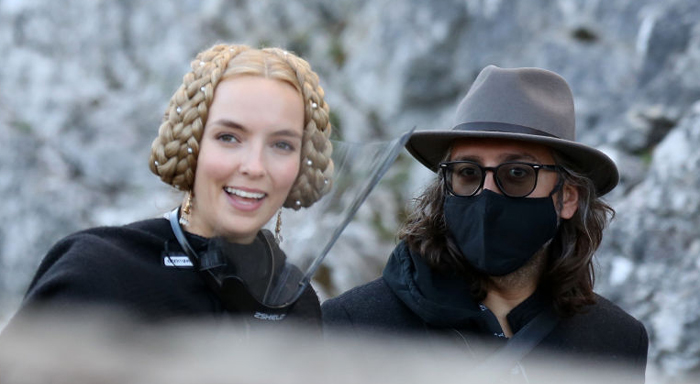 Eyebrows are raising over a Jodie Comer casting. Hayao Miyazaki has a bold new project in the words. There’s bad news for lovers of the Alamo Drafthouse and award season mayhem. But good news for fans of Regé-Jean Page, Carrie Brownstein, and (checks notes) Lena Dunham.

The SAG Awards are shaking things up with a pre-taped show, which means all the nominees will know who wins before the event airs in April. Basically, they don’t want to pull a Golden Globes. (Variety)

Alamo Drafthouse is filing Chapter 11. This will allow the movie theater to restructure. Sadly, this means some locations are shuttering for good, among them The Ritz in Austin, where many of the Pajiba staff (past and present) forged fond memories. (Variety)

Something to look forward to when playhouses reopen: Hayao Miyazaki’s Spirited Away is being re-imagined as a stage production. (/Film)

Christmas comes early with news of a holiday horror resurrection: Silent Night Deadly Night is getting a reboot. (/Film)

Great news for fans of Carrie Brownstein and St. Vincent: their movie The Nowhere Inn has finally gotten picked up by a distributor. After awing on the festival circuit, this mind-bending and funny mockumentary was bought by IFC Films. Look forward to seeing it this fall. (The Wrap)

Having recently wrapped on Ridley Scott’s The Last Duel (pictured above), Jodie Comer might reteam with him for Apple’s Kitbag. She’d star opposite Joaquin Phoenix, playing Joséphine de Beauharnais to his Napoleon Bonaparte. Three great talents! So what’s the controversy? Well, the 27-year-old leading lady would play opposite the 46-year-old, even though Joséphine was 6 years older than Napoleon. (Collider)

Zach Braff is prepping his next directing effort A Good Person, and he’s cast his (and the internet’s) girlfriend, Oscar-nominee Florence Pugh. (Deadline)

Lena Dunham has made a movie in secret. Her first feature film in 11 years is called Sharp Stick. The dunks write themselves. (IndieWire)

Mira Nair has announced her 1991 romance, Mississippi Masala is getting a Criterion release in 2021. Well deserved/it’s about time!

Not much longer to wait. MISSISSIPPI MASALA is re-releasing this year 2021 in a newly remastered version by Criterion https://t.co/jfxMrrFrqK

While Nicole Beharie gains award season accolades, the drama in which she is phenomenal, Miss Juneteenth is being spun into a series! (Shadow and Act)

Netflix guns hard for award season wins, but sadly Eurovision Song Contest: The Story of Fire Saga hasn’t gotten the swanky FYC campaigns of The Trial of the Chicago 7, Mank or Ma Rainey’s Black Bottom. Thankfully, the only Óskar in Husavik is determined to sing the praises in hopes of a Best Song Academy Award nomination.

← Seth Meyers Gets Serious(ish) About Dr. Seuss | Like CBS All Access, Paramount+ Is Still Too Little Bang for the Buck →