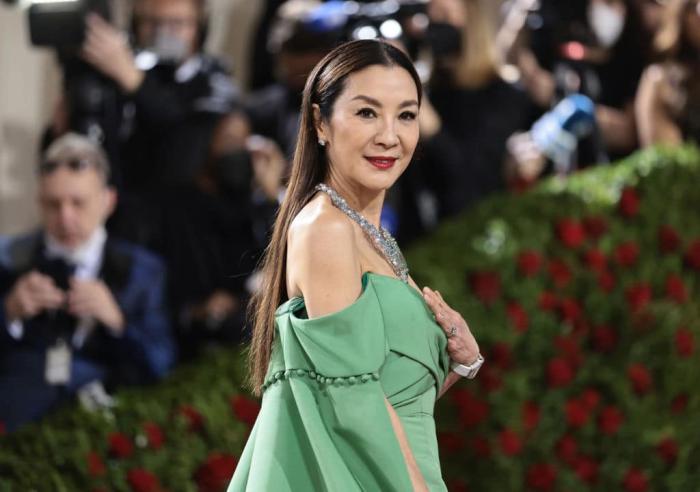 There was a lot of pop culture this year. Perhaps too much. Keeping up with it all is a full-time job, not even one that those of us who write about it for a living can manage. To make things easier, I have compiled a list of my favorite pop culture double bills of 2022. Some of these are connected through themes or style, while others are mixtures that simply made a lot of sense in my head. This isn’t necessarily a best-of list so much as it’s a way to find a clear path through a crowded field of content. Some things just make sense.

Sea of Tranquility and Everything Everywhere All at Once

Everything Everywhere All At Once was one of the true victors of 2022. The sci-fi comedy drama from Daniels, starring Michelle Yeoh and Ke Huy Quan, spent months in cinemas finding its audience through enthusiastic word-of-mouth and has become an unlikely Oscar contender. A lot of people have found immense joy and catharsis in its portrayal of a messy mother-daughter relationship, but what touched me the most about it was its overall philosophy of life.

In it, I found an unexpected partner to one of my favorite books of 2022, Emily St. John Mandel’s Sea of Tranquility. I wrote about the novel on our best books of the year post so I won’t blabber on too much. Really, what stuck with me about it is how, like Everything Everywhere All At Once, it finds serenity with a shrug. What is the meaning of life? What if we make one wrong decision in a million and it changes everything? How do we even begin to answer these crushing and impossible questions? Both Mandel and Daniels just smile and reply, ‘So? Who cares? That’s not the point.’ In a long, tough, and troubled year, I found that to be exactly what I needed to hear. It’s not ambivalence so much as it’s finding hope in reality.

Elvis and Crimes of the Future

Fame will eat you alive. It’s not a new perspective but two very different films shared the same DNA on this theme in 2022. One, a splashy biopic that blinded its audience with the ceaseless dazzle of the spotlight. The other, a return to the world of body horror for a director with a sharp sense of physical trauma in its myriad forms. Subtlety is not for Baz Luhrmann, nor is it a concept that David Cronenberg welcomes with open arms. They say less is more, but for both men, more is more.

Elvis succeeds when it’s at its loudest, reveling in the madness of being the most famous person ever and the impact that mania has on those in the surrounding orbit. When Austin Butler shakes those hips and adolescent girls can’t stifle their screams, the potency of his celebrity is addictive. Luhrmann loves to heighten the mood to capture the intrinsic emotions of any given moment, but even at its most ludicrous, there’s something so truthful about his take on the Presley era.

You can’t exactly say the same for Crimes of the Future, set in a world where pain is non-existent and artists offer live performances of organ removal for eager crowds. Even Hannibal Lecter would have questions about the process of Viggo Mortensen and Lea Seydoux, who turn mutilation into ponderous philosophy for well-dressed viewers. This is the next step in Cronenberg’s decades’ long exploration of the malleability of flesh. Like Videodrome, our bodies are mutated by our thirst for entertainment, for further boundaries to push against. When the body no longer feels, what’s to stop it from becoming a canvas? The exploitation of our bodies is the backbone of entertainment, and Cronenberg knows it’s only a matter of time before those hands reaching for a heartthrob singer on-stage sink their claws in.

Queer for Fear and Interview with the Vampire

Horror is gay. Fact. The intrinsic queerness of the genre and its embrace by LGBTQ+ communities over the decades has helped to radically define the way our stories are told. This year, we saw one documentary tackle the trend and one long-awaited adaptation reinvent a beloved tale for a modern audience.

Executive produced by Hannibal showrunner Bryan Fuller (a guy who knows a thing or two about hot gay villains), Shudder’s Queer for Fear offered an expansive study of the genre from an inclusive queer perspective. It dug into the subtexts, the hints and twists, and even the hidden desires of some classic horror legends like Bram Stoker. The picture it created was one where horror is an indelible part of queer culture, a creative sphere that keenly understands the perspective of the maligned outsider. Many LGBTQ+ people know how to look between the lines to find representation, to see those themes and ideas that speak to us in ways that often could not be said out loud. Those moments have always been there.

They’ve certainly always been there with vampires, the best of the fictional monsters (again, that’s just a fact. Suck it, zombies.) Anne Rice’s Vampire Chronicles has long been the standard bearer for queer bloodsuckers, a trailblazer for decades that changed the face of the entire genre. Adapting it for AMC was never going to be easy, yet somehow, the brand-new Interview With the Vampire wildly exceeded our loftiest of expectations. While retaining the baroque intensity of the books, the series offered new twists on iconic characters, blending queerness and race with familiar mythos. It didn’t hurt that Sam Reid and Jacob Anderson were giving stunning performances, two of the best on TV in 2022. The chemistry alone is enough to fuel as many seasons as AMC desire. As a lifelong fan of Rice’s work, it was a pleasure to see it brought to life with respect for the books but enough confidence to update and explore the material. Bring on season two.

We’re currently in an interesting era of re-examining so-called ‘difficult women.’ There have been earnest reconsiderations of famous women throughout recent history who were wronged by the media or the subject of horrendous misogynistic attacks. Some of this has been heartily welcomed, although it’s not as though 2022 was a year where we learned our lessons (hello Amber Heard, Meghan Markle, and Megan Thee Stallion.) Some of these cultural rewrites leaned too far into blindly rebalancing the scales, robbing these prickly and complicated figures of any sense of autonomy in an attempt to show the ways they were hurt. Two very different exceptions brought the spike back to proceedings.

Created by writer Molly Lambert, the podcast Heidiworld was to the infamous Hollywood madame Heidi Fleiss what Nixonland was to Richard Nixon. Following Fleiss from her childhood through to her rise through the sex work ranks and glorious media explosion during her trial, Lambert doesn’t sand away her subject’s rough edges. She’s empathetic but not interested in a whitewash of well-covered history. Her real focus is on how the Fleiss case exposes America’s issue with sex, particularly sex for sale and the world’s oldest profession. Its intersection with celebrity and the burgeoning 24-hour news cycle of the ’90s led to a unique moment in society, one where all the wrong lessons were learned.

Corsage, meanwhile, is more interested in myth than history. Vicky Krieps plays Elisabeth, Empress of Austria, a woman who has been the subject of more than a few romanticized epics. Don’t expect adherence to the truth here, as writer-director Marie Kreutzer is more intrigued by the irreverence of Elisabeth’s mythos. What is it like to be a figure of simultaneous idolatry and scorn, and to truly not give a f**k about it? Corsage has more in common with Spencer than prior Elisabeth movies, which should give you an idea of its tone, although this one is far cheekier than its Diana-focused brethren.

Women Talking and Run Towards the Danger

The most obvious double bill of the year is the Sarah Polley duet. The Canadian actress-turned-filmmaker had one hell of a 2022 thanks to a beautiful film and her own collection of insightful essays. Adapted from the novel by Miriam Toews, Women Talking described itself as ‘an act of female imagination,’ a safe space amid the danger that allowed its central community of abused Mennonite women and girls to decide their futures. After being repeatedly drugged and raped by a group of men in their supposed haven, the women must decide whether to stay and forgive the men, stay and demand change, or leave the only home they’ve ever known. Every option is a risk, a reminder of the fraught nature of their mere existence in a world that is not equipped to keep them secure.

Polley has a long and varied history in the entertainment world, which has given her a unique insight into the ways that women and girls are put through the wringer for purposes of profit. As Run Towards the Danger details, she had terrible experiences as a child actor, including on a wildly unsafe set run by Terry Gilliam, and dealt with the pain of sexual assault, anxiety, and a years’ long head injury that almost brought her life to a halt. With clarity and eloquence, Polley tackles not just the dark events of her own past but the context in which they occurred and what systemic foundations allowed them to happen to herself and countless others. Both works offer pragmatism and hope in equal measure, a path forward with a reminder of how many roadblocks stand in our way.