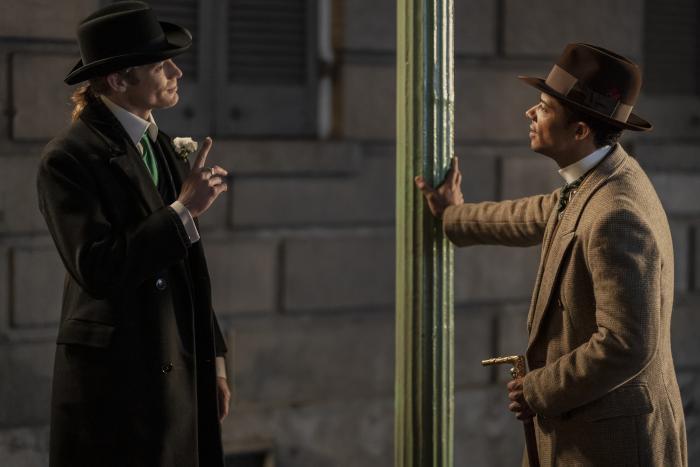 While Anne Rice’s 1976 gothic novel, Interview with the Vampire, immediately made a deep and permanent impact on the horror landscape—her 1980s follow ups, The Vampire Lestat and The Queen of the Damned, reached increasingly larger audiences, with the latter debuting on the New York Times Bestseller List—the success of the 1994 film of the same name pushed her Vampire Chronicles (the collective series’ name) into the stratosphere. Starring Brad Pitt as the sullen Louis de Pointe du Lac, Tom Cruise as unrepentant killer Lestat de Lioncourt, and directed by Neil Jordan, the film would go on to become a massive hit, garnering several Academy Award nominations (Best Art Direction and Original Score) and a Golden Globe Award for then twelve-year-old Kirsten Dunst for Best Supporting Actress. A stylish but disjointed adaptation of The Queen of the Damned followed eight years later, with Stuart Townsend taking on the role of Lestat, but it was largely considered both a critical and commercial failure, and subsequent adaptation attempts floundered over the following decades.

After many years’ worth of development leapfrogging, Anne Rice’s dream of seeing her Vampire Chronicles brought to television has finally been realized, with its premiere airing on October 2nd (Rice sadly died last December, though she and son Christopher Rice were heavily involved in this adaptation). The major story structure is the same as the source material: Louis (played by the effervescent Jacob Anderson) recounts his century-long life as a vampire to journalist Daniel Molloy (played here by Eric Bogosian; Christian Slater occupied the role in the ‘94 film), beginning first with his transformation at the hands of Lestat (Sam Reid). While many of the novel’s original elements hold true, especially the New Orleans setting Rice so loved, there’s a multitude of changes, something to be expected in an adaptation created more than forty-five years after the novel’s initial release. What is wholly surprising, however, is that thus far, each and every one of these changes has only improved the material, making what could have been a stale, moth-eaten artifact of a story into a lively and sensual series.

One of the biggest alterations has to do with Louis de Pointe du Lac himself. In the novel, he was a plantation owner, whose enslaved people are treated as prey by Lestat. The AMC series has smartly sidestepped that objectionable quagmire by advancing the earlier timeline—the show goes back and forth between the current day interview, set in the technologically sleek Dubai, and Louis’ early days as a young man-turned-vampire—to the 20th century, post-slavery.

But post-slavery does not mean post-racial, and the acknowledgment of such is one of the strongest and most notable diversions from the source material: Black people here are not only fully embodied characters, but the matter of race itself is directly confronted. In a time where race-blind casting, for all its positives and faults (as far as the opportunity loss of portraying experiences unique to the individual’s race goes; many Black critics have discussed this far better than I possibly ever could, I encourage readers to seek them out), it was easy to assume that Anderson, a Black man, would occupy a role absent of any regard to the color of his skin, a gothic Bridgerton, as it were. What we get instead is a portrayal of the familiar vampire lore contextualized through Blackness in America. “You truly are an exceptional Negro,” an oily businessman tells Louis, who responds to the condescension in the most understandable way possible: by eating him. Louis’ gradual understanding that his newfound powers provide him a freedom beyond mere mortality is as compelling to witness as it is a relief for him:

“I had powers now and decades of rage to process, and it was both random and unfortunate, the man picked that night to dabble in f*ckery.”

Snappy writing aside, it also puts a whole new lens on the Louis/Lestat dynamic. When asked by an angry Lestat over why Louis had to kill this particular man (the same one reference above), Louis’, “He told me I did a good job,” is beyond this immortal — but still white — being’s comprehension. Although Lestat is aware that being Black in 1910 is a challenge—an awareness he uses to his advantage to turn Louis, in fact—he’s clueless on the daily aspects of his new companion’s lived experience. Louis calls him on this, and the exchange that follows is refreshingly real and a delight to view (his objection to Lestat’s repeated use of the word “fledgling” aimed at him is especially sharp yet knee-slappingly funny). It’s the first real marital spat they have and provides a great glimpse of the continuous conflict that will plague their relationship.

This leads me to the other marked difference found in this updated version: it is gay. Unabashedly so. Where the film version only dared to venture into vague homoeroticism, not to discount its importance during a time where such a thing was still infrequently explored in popular media, the 2022 interpretation is entirely open on that front. Lestat and Louis are outright lovers (while observing early 20th-century mores, of course), and although the “floating” sex scene between them has garnered a lot of attention, the “His & His” coffin scene is the stuff of paranormal romance dreams.

But for all of these great qualities, the number one reason to tune in on a weekly basis is Anderson himself. As Grey Worm on Game of Thrones, Anderson managed to give a heavily restrained role an internal life that would have escaped many performers. In Interview with the Vampire, however, Anderson completely lets loose. His very cells vibrate with whatever emotion Louis experiences at any given moment, and they’re many. From the pit of hellish despair culminating in a jaw-dropping monologue in a church confession booth to the delightfully goofy intoxication (complete with spacey eyes and massive silly grin) that comes with being a new vampire, it’s a far cry from Pitt’s morose version and is an absolute must-see performance. Co-star Sam Reid makes a full meal out of his Lestat; take Cruise’s interpretation and dial it to an eleven. This isn’t a bad thing, and is actually what helps give the series that last bit of supernatural razzle-dazzle, but I did find it the slightest bit disconcerting at first glance.

This show is a slam dunk for fans of vampires and Rice’s books in particular. However, even for those who may not have a fervent love of either, I would strongly encourage giving the series a chance. Even setting aside my lingering affection for the source material (angsty teen I was), this is without a doubt one of the strongest series debuts in years, filled with a unique blend of horror, sexuality, and humor that’s found in few other places. Though we’re only three episodes in, this is the beginning of a saga that is already proving itself more than worthy of being seen through to the end.

Kaleena Rivera is the TV Editor for Pajiba. When she isn’t urging everyone to just go ahead and tack on that AMC+ subscription already, she can be found on Twitter here.