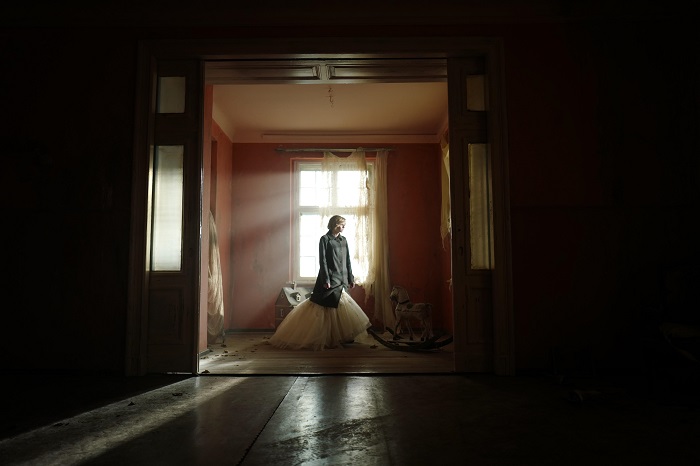 Review: Kristen Stewart Is a Compelling Diana in the Fantastical Ghost Story 'Spencer'

There is a moment in Spencer, when Diana (Kristen Stewart) is trying to leave the Queen’s Sandringham Estate and visit the neighboring, now-abandoned Park House where she grew up, when a pair of guards at first block her way without knowing who she is. “Just say you saw a ghost,” she says self-effacingly, self-consciously, and self-pityingly when the guards tell her they have to call it in, and that trio of emotions reflects the tenor of Pablo Larrain’s princess portrait. Stewart is a magnetic force, pulling from a deep well to ensconce herself in anxiety and distrust, and the supporting cast is phenomenal. And Larrain’s film—as he did with Jackie—uses its cinematography and fantastical elements to emphasize the loneliness of Diana’s longing, making for a melancholy and ultimately bittersweet watch.

Describing itself as a “a fable from a true tragedy,” Spencer presents a fictionalized version of the Royal Family’s 1991 Christmas, held over three days at the remote, historied Sandringham Estate. (Robert Daniels has a great piece at Vulture about what is factual in Steven Knight’s script about that time period and the film’s characters.) Diana and Charles’s (Jack Farthing) marriage is in shambles mostly because of his lengthy affair with Camilla Parker Bowles (Emma Darwall-Smith), and the press are eating Diana alive. They follow her endlessly, their bulb flashes blinding and their attention stifling. And yet there’s no respite offered by the Royal Family, for whom this is customary—and key to maintaining their power. They want the attention, and they need it. Without it, what is their purpose?

That question plagues Diana, who is introduced driving to Sandringham Estate by herself, her cartop down, her map impossible to decipher. She’s lost, even though she grew up around this place, and even though she’s been there for Christmas before. Stewart’s Diana is a woman unmoored, a woman who hates what she has become and who is in constant opposition to it. Larrain frames her in constant closeup, with her constantly flickering eyes, shaky breaths, and minute head turns and tilts communicating a woman battling her own intuition and undermining her own intentions. She’s coming to Christmas because she’s been called and because it’s expected, but not because she wants to. There’s a sense from Knight’s script, which is heavily reliant on “Diana speaks plainly about her feelings to anyone who will listen,” that Diana hasn’t done what she’s wanted in a long time.

Once Diana arrives at the estate, Spencer becomes a ghost tour—all extremely wide angles and tracking shots that situate Diana as the lone figure in a hallway, in a foggy field, or in a pantry hallway full of plattered meats and desserts. There’s the ghost of Anne Boleyn, whose tragic demise reminds Diana of herself and who Diana sees wandering around the halls. There’s the ghost of Diana’s childhood, embodied in the boarded-up Park House and by the scarecrow wearing Diana’s father’s coat in the middle of a field. And there’s the ghost of who Diana used to be, before the Royal Family and the apparatus surrounding it began choosing all of Diana’s outfits, dictating that all meals only begin when the Queen arrives, and engaging in the centuries-old traditions that dictate submission and obedience. “It’s a lovely bit of fun,” Diana says in a put-upon tone of good humor, and Stewart is gritting her teeth so much during Spencer that it’s a wonder she didn’t crack a tooth.

This is a solidly physical performance from Stewart overall, who never quite looks or sounds like Diana but who captures instead myriad elements of her essence—or at least, the essence I remember from my childhood idolizing Diana. She was this unlikely mixture of resolute but sorrowful at all times, like she’d seen some shit, was working through it, was constantly torn up needing to protect herself but was committed to doing it, and Stewart nails all that. A dinner scene where Stewart’s Diana imagines everyone’s judging eyes on her before greedily slurping down pea soup, covetous and uncontrollable, is a standout, as is a later moment when she wanders around Park House, practically clawing her way up the stairs to reassess her childhood bedroom. Spencer includes portrayals of Diana’s bulimia and self-harm, and although those scenes are difficult to watch, Stewart nails the mixture of fragility and anger that lead to those moments. She also has solid chemistry with practically every scene partner, in particular Sally Hawkins as her devoted dresser Maggie and Sean Harris as Royal Head Chef Darren McGrady, whose characters treat Diana with gentleness, concern, and a little bit of a reality check.

They know that most of the Royal Family has begun to hate Diana, and they wish she could better separate her personal and private lives. “Keep noise to a minimum. They can hear you,” reads a sign in the basement of the estate, and it’s a message for people like Maggie and Darren—the workers whose livelihoods are tied to the Royal Family. But that’s Diana too, as she’s reminded over and over again by Charles, by her children, by Queen Elizabeth II (Stella Gonet), who spends more time with her Corgis than her family, by Equerry Major Alistair Gregory (Timothy Spall), who arrives at Christmas to spy on Diana. What weight is it to be a figure rather than a person? Spencer isn’t exactly creative in its imagining of the effect of that kind of responsibility, and it is actually sometimes ghoulish in the words it puts in Diana’s mouth given our awareness of what eventually happens. (“Will they kill me, do you think?” she asks Darren about how the Royal Family will react to her lateness.) As an overall film, Spencer takes the “Diana, tragic figure” aspect of her persona and doesn’t deviate from it, for better and for worse. But Stewart is revelatory throughout, and the intensity with which she imbues Knight’s dialogue—bitterness for “The past and the present are the same thing” while speaking to her children; resentment in saying to Charles, “Sometimes you get delayed by someone, but no one says anything”; and, most hilariously, to one of her attendants, “Now leave me. I wish to masturbate. You can tell everyone I said that”—elevates Spencer to a film made special by her performance.

Spencer is available for digital rental and video on demand.

← Jeff Garlin Awkwardly Admits and Denies Long-Running Misbehavior on the Set of 'The Goldbergs' | Showtime's 'Yellowjackets': Who Else Might Be Alive? →