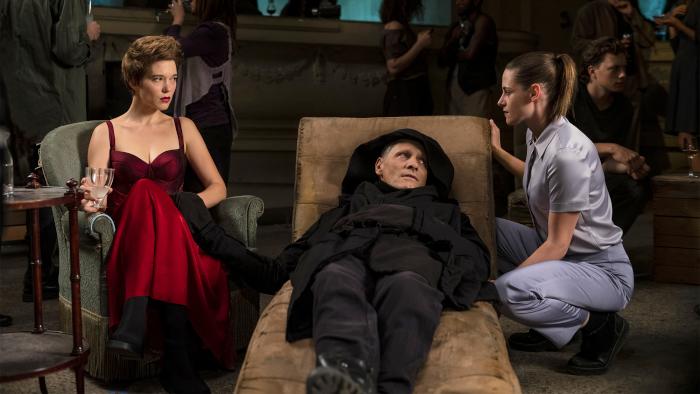 Review: 'Crimes of the Future' Is a Science Fiction Opus for the Sickos

There’s a craft I can barely fathom to concoct a perfect incidental tagline for your feature films, and no one does that better than Canadian horror icon, David Cronenberg. “Long live the new flesh,” is a rallying cry for the sickos amongst us who love Videodrome, and “Death to the demoness, Allegra Geller” is a quick identifier for fans of eXistenZ. For his first instance of floating back to his body horror roots since 1999’s aforementioned eXistenZ, Cronenberg brings us, “surgery is the new sex,” the call for those to flock to his latest, Crimes of the Future.

Crimes of the Future is the return to form for the director who sits in a very different place in the world than he did in the 1990s. For this adventure, Cronenberg revisited his own old script and churned out a feature film that layers his body horror and penchant for Geiger-adjacent props (as bolstered by the return of long-time collaborator, production designer, Carol Spier) atop a new science fiction tale. This time, he’s tackling a version of the future where a small number of humans have started spawning new organs and the art world has taken to exploring that for show. Saul Tenser (Viggo Mortensen, back with the director with whom he did two crime movies, now diving into body horror alongside him) is an aging and sickly man. His body is seemingly conspiring against him, causing him to experience pain (a sensation that’s almost otherwise extinct) and spontaneously sprouts new organs that he views as invasive tumors. Managing this odd way of aging, Tenser enlists strange technology for his bed and feeding chair, and the efforts of his performance art partner, Caprice (Léa Seydoux). As a duo, the two host underground avant-garde performances, Caprice using a modified autopsy device as a paintbrush, decorating then removing these new organs for a captivated audience.

Though Caprice and Saul are aligned amongst the moderate, they’re tested when they find themselves involved not just with the National Organ Registry, but also with members of the rebellion. Floating on lines between the state and the rebels, the artists find themselves mechanical-elbows deep in a political statement wrapped in a corpse.

All of the signatures of Cronenberg’s truest film self are here, including his ability to get incredible actors to buy into what can sometimes sound like “sci-fi bullshit.” Maybe you were impressed by Guardians of the Galaxy getting Glenn Close to spew space nonsense like, “Ronan is destroying Xandarian outposts throughout the galaxy,” but have you ever heard Kristen Stewart sultrily whisper about the sex appeal of organ generation? The (brilliant) core cast dives headfirst into the film’s world, blending beautifully into the grey-toned universe where an alt culture gathers to document guerilla surgeries. It’s their buying into the world while adding just enough eccentricities to the characters that allow the audience to be enveloped by the surreal story.

The remaining stage is set by crumbling backdrops that seem to maroon the audience to dank office spaces and underground tunnels made of rock with limited structural integrity. The stage itself is leaking while the characters are draped in crisp garments and minimalist makeup. This world is shattering, and the humans within it are calmly passing through it as much as they’re futilely trying to smash it back together.

As he’s done with his body-horror-sci-fi before this one, Cronenberg used his tale as a metaphor to explore deeper themes about the world around us. The robot scalpels slicing his leads during sexual encounters aren’t simply for shock value, but to create a deeper tale about being an aging member of the old guard in a world where the state is trying to suppress progress. It’s an exploration of basic human desires that’s equally revolting as it is sensual. It’s a beautiful metaphor wrapped in a bizarre collection of tableaus of naked bodies and surgical tools.

While the bizarre is to be expected of Cronenberg, there’s the question of entertainment value and target audience that this critic can’t help but pay mind to. There are times, specifically in the first half, where the film flutters a little too close to mother! on the spectrum between “weird for cinema’s sake” and “weird for weirdness sake.” In the moment, I had instances of flinching and found myself profusely apologizing to the pal I’d convinced to join me after an otherwise raucous day of patio cocktails. But while even I found myself drifting from willingness to embrace all the chokes, gags, and unexpected nudity of the first hour or so, a night of reflection left me with a “hell ya, do you, David,” and gleeful thoughts of sending friends the “sickos” meme.

Crimes of the Future was released in theaters June 3, 2022