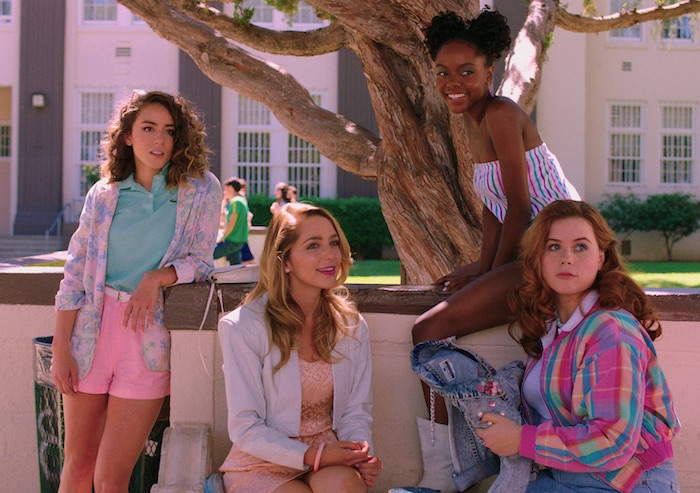 Announcing a remake of Martha Coolidge’s 1983 teensploitation film Valley Girl in November 2016, just four months after the first season of Stranger Things exploded onto the scene, one can imagine MGM execs thought they had a shoo-in to capitalize on the recent ’80s nostalgia craze. A cult hit best remembered for being the breakout role of teenage Nicolas Cage, the original Valley Girl tells a vaguely Romeo and Juliet inspired story of star-crossed lovers Julie, the titular Valley girl, and Randy, a Hollywood punk.

All remakes save the most shameless try to throw at least one new twist into the mix to validate their existence. In the case of Rachel Lee Goldenberg’s Valley Girl, that’s turning the whole thing into a jukebox musical. Now, I don’t know who decided singing ability was no longer an important consideration in casting musicals. I do know that said person deserves to be flogged because we are all suffering for it. Chloe Bennet, best known for her role as Daisy Johnson in Agents of S.H.I.E.L.D., evidences her teenage singing career as Julie’s mean girl frenemy ironically enough named Karen. The rest of the cast are clearly trying, and autotune tries even harder, but the results are mixed. When you cram an album’s worth of heavily processed covers of top hits into something, it’s hard not to think of Kidz Bop.

Live musical theater demonstrates the continued existence of plenty of talented actor-singer hyphenates, yet when one of them manages to end up in a movie musical nowadays it often feels more a fluke than anything. One can only cross one’s fingers and hope this damnable trend ends sooner rather than later. Sure, there is some humor to be had in watching actors out of their element, kind of like seeing a dog walk on its hind legs, but the novelty is long gone and my ears are tired. But I digress.

Valley Girl is not just a remake but a true pastiche. Sometimes it’s fun, other times it falls on the wrong side of overly derivative. There’s a party scene where Julie sings to herself while making her way through a crowd moving in slow motion a la La La Land. The whole film is told through a Princess Bride style framing device involving grown Julie recounting her youthful antics to her teenage daughter that adds absolutely nothing to the story; it’s very clearly just there so Alicia Silverstone can play adult Julie. Being a remake doesn’t have to mean void of original ideas, but in this instance it really does.

Particularly in the new version, Julie and Randy’s romance is of the sort that doesn’t really have obstacles so much as the faint illusion of obstacles. Julie’s relationship with Valley boy Mickey (Logan Paul, in a casting choice that certainly seemed like a better idea at the time) is so shallow its end doesn’t even merit a breakup song when Julie’s attraction to Randy finally gives her an excuse to call it quits. Sure, it alienates her from her friends, but she was clearly getting a little tired with them anyway. Julie’s parents may not like Randy, but they hardly threaten to disown her, either. The film goes for a “star-crossed lovers” vibe, but the stakes feel comparable to riding a bike with training wheels while wearing a helmet and knee pads.

What Jessica Rothe and Josh Whitehouse do have as the central couple, thankfully, is chemistry—enough of it to make for a generally pleasant if uneventful ride. Admittedly, Whitehouse can’t match Cage’s energy in the role of Randy, but then again, who could?

With the chemistry and shameless nostalgia-grab of jazzercise, leg warmers, and 80s pop, there’s enough to Valley Girl to entertain, although there’s admittedly little there to impress. A delightful skating rink disco dance-off to the tune of “Safety Dance” provides a glimpse of the vibrant joy ride the film could have been with more verve and imagination, but even as-is, for ’80s lovers out there, there are definitely worse ways to spend a few hours.

Valley Girl is available to watch on VOD.