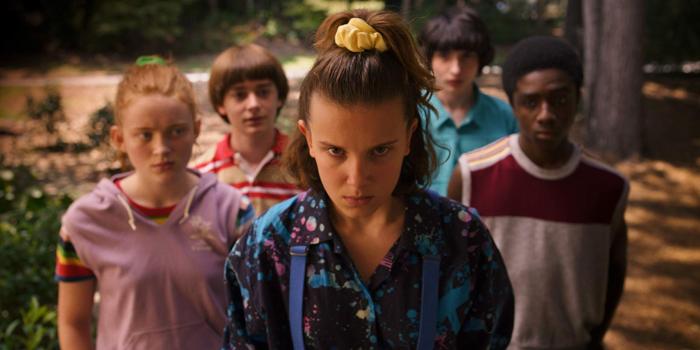 There’s a painfully obvious scene in the third season of Netflix’s Stranger Things that may as well be a mission statement for the entire show: Lucas extolling the virtues of New Coke to an incredulous Mike. On the surface, it’s just another wink-and-nod to the ever-present ’80s nostalgia of the enterprise, and a nifty bit of product placement to boot (hey, did you hear Netflix partnered with Coca-Cola to bring New Coke back to shelves?!! GO FIGURE.). But it’s also an argument in favor of reboots — a defense of things that taste a bit like the stuff you love but also can be enjoyed for themselves. An unnecessary argument, surely, since anyone bingeing Stranger Things 3 on a holiday weekend instead of watching The Goonies or whatever surely knows exactly what they signed up for, but I digress. What stuck out to me the most about that scene is that this argument was about the relative virtues of SODA, the ultimate empty calorie beverage. And isn’t that just spot-on for Stranger Things? Fine as its own thing, not as good as the original, and certainly not healthy or valuable in the slightest.

The thing is, I like empty calories sometimes! I enjoy Coke, and Doritos, and ice cream and McDonald’s — and I like Stranger Things too. But the difference between this season and the two before it was as painfully obvious as that New Coke scene. The show has always been an ’80s nostalgia-fest, but it used that aesthetic to craft something original. The story of the Upside Down hiding behind a rift in the small town of Hawkins didn’t have to be set in the ’80s at all. The references were merely set dressing — a shorthand to set the mood, just like spelling out the title in that distinct horror novel font made us all think of the roving packs of bike-riding kids that populate Stephen King books. But this season, the references are explicit. It’s not enough to have a can of New Coke in the shot — the characters need to talk about it. There can’t be a Jazzercise studio without copious shots of Day-Glo spandex butts, and while we’re at the mall let’s throw in a full montage of Eleven trying on Crayola-colored outfits at an old-timey The Gap. And if Dustin is going to sing a duet with his not-imaginary, totally real science camp cutie for the climax, it won’t just be any ’80s slow jam — it’ll be the theme tune from The Neverending Story, sung in its entirety, and then reprised AGAIN by Max and Lucas as a joke.

The nostalgia isn’t new, and if I’m being honest, I look forward to taking a trip down memory lane with every season (I will never turn my nose up at an excuse to hear a Huey Lewis track, after all). But the way the show over-emphasized its own cleverness, winking at every reference, is new — and probably intentional. This is, after all, the third season, and third installments are notorious for going over-the-top. Stranger Things 3 was overindulgent, sure, but no more so than Return of the Jedi with its alien teddy bears or Indiana Jones and the Last Crusade and its decision to introduce Sean freakin’ Connery just to explain where Indy got his name. The ways in which the show went overboard this season are themselves throwbacks to the way trilogies always seem to fly off the rails in the end. But is that just another way of excusing the show’s weaknesses, by saying they’re intentional? Is nostalgia a Teflon coating to proof the show from criticism? Or am I thinking too hard about empty calories again?

And speaking of over-the-top… How ‘bout them Russians!?! Yes, this season the Hawkins mystery dips its toe into Cold War waters as an undercover Soviet branch attempts to re-open the gate to the Upside Down by building a massive underground complex… and hiding it all underneath that shiny new shopping mall. Worse yet, their attempts have awakened the last, lingering shred of the Mind Flayer that was locked out in our world when Eleven shut the gate, and it quickly resumes its plans for world domination via Body Snatching the locals. Yes, it’s a lot of plot — too much plot, really. But it gives our favorite characters a lot of different ins to the story as they follow disparate clues to the same conclusion, and that proves to be the greatest strength of the season.

Well, some of the time at least. Steve Harrington’s hair growing relationship with Dustin has always been my favorite part of the show, and thankfully that takes center stage this season. Dustin feels neglected by his friends, and Steve is finding life as a popular stud muffin a whole lot harder now that he’s graduated high school and started wearing a sailor suit to work at the mall’s ice cream shop. So the pair gravitate toward each other to investigate a secret Soviet transmission that’s coming from inside the mall — and bring with them Steve’s coworker, the caustic Robin, and Lucas’s too-cool little sister Erica. But their spy games feel like they’re coming from a completely separate show compared to Eleven’s investigations into Max’s mind-flayed dick brother Billy, or Nancy’s rabid rat reporting, or Joyce’s… fridge magnet meltdown. In fact, for most of the season, it felt like there were four separate TV shows competing for our attention, and while that allows for some storylines to truly shine, it makes others feel far more frustrating by comparison. So I could praise the completion of Steve’s character evolution, as he finally falls in love with a girl for reasons that have nothing to do with superficial vanity, only to find out that she’s gay — and then accept it gracefully while continuing to be her friend because what matters is that he likes her as a person! But I’d also be obligated to point out that the will-they-or-won’t-they tension between Joyce and Hopper takes a hard turn into the obnoxious this season, as they neglect their kids and bicker incessantly while on the run from Soviet goons. David Harbour and Winona Ryder have always portrayed their characters as charmingly broken, and they give it their all once again, but this season Hopper and Joyce have become caricatures of themselves. She’s batty, he’s mean, and together they’re downright unlikeable. As for their simmering romance? Well, there’s an on-the-nose Cheers reference right from the get-go, in case you didn’t already pick up on the fact that we’re supposed to wonder Will-They-Or-Won’t-They-Dammit, and by the end of the season even Murray tells them to get a room or STFU already.

And as for the kids? I enjoyed seeing Eleven pair up with Max for some girl bonding while sorting out their boy problems, and honestly, I was way more interested in watching them try on new outfits than I was the whole exploding rats shocker — which is a sentence I never thought I’d type. I also thought it was smart for this season to ultimately take away Eleven’s powers, leaving the big boss battle up to her friends. Having her god-like psy powers to fall back on easily became a storytelling crutch, and even though I’m sure she’ll recover her abilities in the almost-inevitable Stranger Things 4, it was nice seeing everyone else protecting her for a change.

Yes, there’s probably going to be another season, as the final episode ended on a cliffhanger that almost immediately called into question the finale’s big sacrifice. Hopper was in the way of the big Russian ray thingy when Joyce blew it up, and seemingly died right after they’d agreed to go on a date (to be fair, I don’t think Diane ever chose to melt Sam for the sake of humanity, but my Cheers knowledge is admittedly rusty). But there was no body, and the coda in the credits revealed that somewhere in the USSR, there’s a government lock-up holding a mysterious American hostage. And… I mean, it’s gotta be Hopper, right? He’s the only one missing. Although they do have a Demo-dog, just like the one that killed Bob last season, so OH MY GOD WHAT IF BOB’S ALIVE?!

Ultimately, Stranger Things 1 & 2 offered cohesive stories that surpassed the weakness of some of the parts, whereas Stranger Things 3 had some truly outstanding parts that did not make up for the weakness of the overall story arc. But just like I’ll always remember the Ewoks, I’ll always have Steve’s sailor suit to look back on. If nothing else, at least the show gave me that.