Sure, Forky has kids of all ages clamoring for Toy Story merch once more. And the Child’s Play reboot might have you nostalgic for cuddly dolls that not-so-secretly want to kill you. But the hottest toy of the summer isn’t from a movie about toys. It’s from Misommar, Ari Aster’s trippy horror follow-up to the wildly praised Hereditary.

Slight spoilers for Midsommar lurk below!

Midsommar stars Florence Pugh as an American tourist who takes a fateful trip to Sweden with her boyfriend (Jack Reynor) and his friends. There, they visit an idyllic commune for their traditional midsommar festivities, which involve plenty of curious elements, including a flower-adorned bear in a cage. And now you can take the sun-soaked fun home with you, thanks to A24’s special edition Bear in a Cage™.

It’s the toy every child will absolutely love. But don’t trust me. Observe its commercial.

It’s a bear! And it could be yours!

Starting tomorrow, Bear in a Cage™ will go on sale on the A24 shop site. It’s clearly a delight to children, so purchase a sleuth for your kids! Or maybe pick one up for the movie-lover in your life. Or purchase one for yourself as a handsome trinket to ward off bad boyfriends. 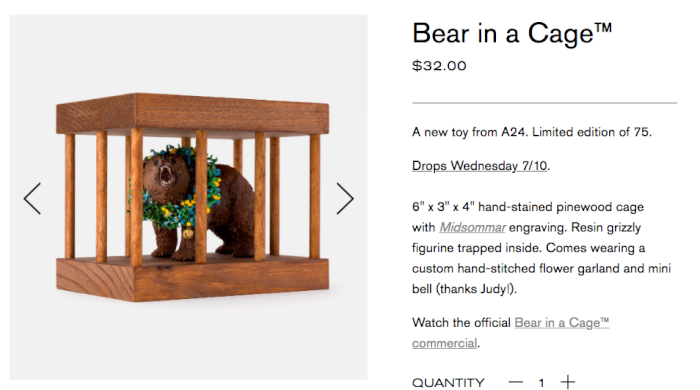 Clearly, Bear in a Cage™ is a gift the whole family can appreciate. But be warned, there are only 75 bears being issued in this limited edition run. So you’ll need more than $32 to snag your Midsommar collectable. Here’s hoping fortune smiles upon you like May Queen does upon the bear.