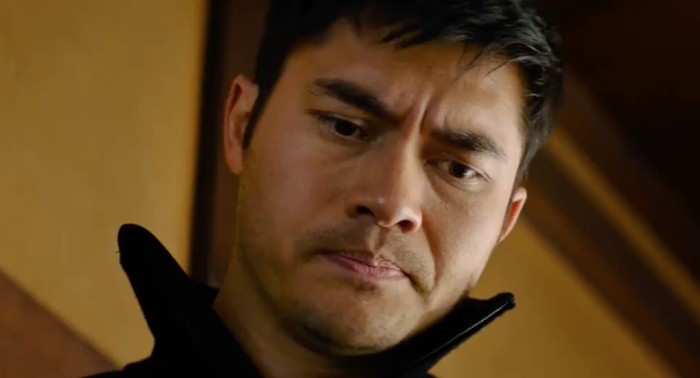 To say that the cinematic adaptations of Hasbro’s G.I. Joe franchise have been a mixed bag is quite frankly an insult to mixed bags. The first, G.I. Joe: The Rise of Cobra, was a hyperactive mess of goofiness directed almost inevitably by Stephen Sommers, featuring some of the weirdest castings I’ve ever seen — Marlon Wayans as comic relief, Joseph Gordon-Levitt (!) as Cobra Commander … it really defies all understanding. The second, G.I. Joe: Retaliation, served as a sort of soft reboot, killing off a confused-seeming Channing Tatum and headlining Dwayne Johnson and Adrienne Palicki. It worked by deftly using the Rock’s grunt-like charm and some eye-popping action sequences, most notably an absolutely wild set-piece featuring ninjas sailing around mountaintops. That entry was unexpectedly directed by Jon M. Chu (In The Heights) and was unexpectedly entertaining, if not exactly good. But MGM isn’t finished with the franchise, and now they’re telling the mysterious origin of one of its most popular characters, the silent ninja known as Snake Eye with Snake Eyes: G.I. Joe Origins.

In this film, the titular character is played gamely by Henry Golding (taking over for Ray Park, who silently played the character in the first two films). He’s an orphan who has spent his life looking for his father’s killer. This brings him into the service of the Yakuza, and later into the service of the secretive Arashikage clan, an ancient Japanese band of ninjas, as well as the Arashikage prodigal son Tommy (Andrew Koji) and Akiko (Haruka Abe).

What follows is … actually surprisingly boring. For a film about ninjas in the modern era based on a series of action figures and cartoons, that was rather shocking. But the truth is, Snake Eyes is dreadfully dull, full of uninspired wannabe sturm und drang about family and loyalty. The betrayals are never particularly surprising, the plot twists not all that twisty, and the story itself is tepid at best. Golding seems to do his best, but either he’s not cut out for action or the flaccid dialogue betrays his talents. It’s certainly not helped by the fact that he lacks the raw physicality that Park brought to the role. Park—being, you know, not Japanese—is clearly the wrong choice for the unmasked version of Snake Eyes, but there’s no denying his physical capabilities. The same is easily said for Koji’s Tommy, who—for those living under a G.I. Joe rock—will evolve into the villainous Storm Shadow. Storm Shadow was one of the highlights of the original films, thanks to the visceral and balletic performance of Lee Byung-hun. None of that is present here.

If anything, the fight choreography of Snake Eyes should have been its selling point. Instead, director Robert Schwenke (Red, R.I.P.D.) went for the most generic sequences possible, edited with the kind of super-quick cuts that’s often indicative of a cast that isn’t all that skilled. Oddly, that’s not always true. Koji is an accomplished martial artist, as is Peter Mensah as Blind Master and the stunning Iko Uwais as Hard Master. Yet none of those skills are ever truly displayed, instead opting for overcrowded, poorly lit action sequences that are uninspired at best. When a film lugs its way through an insipid, muddy plot as lackadaisically as this one does, action is the only thing that’s going to get it any attention.

I doubt anyone had very high expectations going into Snake Eyes, but somehow it managed to tunnel its way under that already low bar. It’s a drab, tiresome two hours that never satisfies, doing a disservice to both its cheeseball roots by taking itself too seriously, and to its dramatic intentions by being, well, stupid. Other than fun late appearances by Samara Weaving as Scarlett and Úrsula Corberó as Baroness, the cast never lives up to its potential. You’re left with a shell of a film, lazily assembled and shoddily directed. Honestly, you’re better off just playing with the action figures.

Snake Eyes is now in theaters.