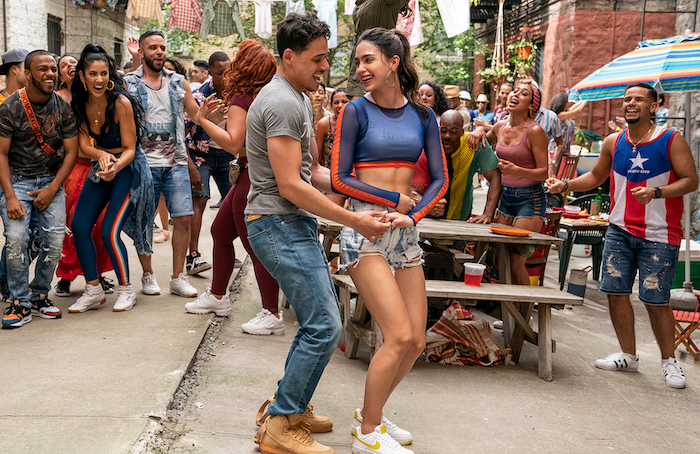 Now on HBO Max: ‘In The Heights’ Makes for a Cotton-Candy Sweet, Deliciously Summery Spectacle

The long-gestating film adaptation of In The Heights might have been filmed pre-Covid, but it feels tailor-made to lure audiences back into theaters—the sort of movie that’s made to be seen on a big screen with a tub of popcorn and an Icee. It’s a hefty dose of summer sunshine that can be enjoyed in air-conditioned, mosquito-free comfort. The summer tentpole is back!

Director Jon M. Chu (Crazy Rich Asians) does a truly outstanding job adapting the musical for the screen, utilizing the particular strengths of the film medium in the telling of the story. The opening eponymous musical number “In The Heights” is a particular triumph. Instead of merely filming actors dancing, the music seeps into the very tools of cinematic storytelling, into rhythmically cut montages that luxuriate in making use of all the little details one can’t really use in theater. A remarkable window reflection shot rises to the challenge of picking between an expressive close-up and an intricately choreographed wide shot by doing both at the same time. A later musical number set in a beauty salon makes a veritable tap number through clever use of acrylic nails. Alice Brooks’ cinematography is an MVP throughout; the location of Washington Heights, so rarely celebrated on screen, becomes a central character in the story.

Story-wise, In The Heights is more vibes than plot, in the sense that the plot is the most paint-by-numbers “dreamers chasing dreams” story one can imagine, but the particular vibrance of the setting and the performances shine so brightly it ultimately doesn’t matter. The screenplay written by Quiara Alegría Hudes, who also authored the book of the musical (Lin-Manuel Miranda wrote the music and lyrics) sticks close to the source overall.

The central dreamer is loveable young bodega owner Usnavi (an infinitely charming Anthony Ramos) who came with his father to the US from the Dominican Republic as a child and now wants nothing more than to save up enough to make his way back. He also dreams of romancing Vanessa (Melissa Barrera), the woman of his dreams, who we are supposed to believe is unaware of this infatuation even though he follows her around like a puppy dog and never charges her for coffee because this is a musical and that’s how they work.

Another dreamer is Nina (Leslie Grace), a smart, determined young woman who comes home feeling defeated after her first year at Stanford, intending to drop out but too ashamed to tell her father or the rest of their close-knit community. Her storyline is subject to some of the more significant stage-to-screen revisions that are well-meant but don’t fully work. To address the crux of the issue without going into spoiler mode, it feels the need to replace the obstacle of work-study balance as a low-income student with the challenge of the microaggressions and isolation of being a student of color at a PWI in a way that makes her storyline’s conclusion a bit of a head-scratcher and also begs the question, why not both? These are not mutually exclusive—if anything, they tend to be a package deal.

Sonny de la Vega (Gregory Diaz IV), Usnavi’s precocious tween cousin, gets perhaps the biggest expansions in his arc, with a politically charged DACA storyline that’s well-intentioned but feels like the add-on that it is. There’s a fundamental, unblinking optimism to Miranda’s work that makes it impossible for it to grapple with such issues in a way that feels fully authentic. For all the grandeur and pomp on display elsewhere, an attempted “protest” scene is laughably pathetic in comparison. It’s like watching cotton candy try to be a vegetable.

Miranda has an incredible talent for telling diverse, multicultural stories without challenging the status quo in the slightest: times are hard, dreamers have dreams, pull yourself up by your bootstraps. He has a gift for managing to put together character arcs without doing anything to offend or challenge literally anyone or anything. For instance, when Washington Heights swelters in a power outage for days on end and the idea that those in charge—or, you know, ConEd—should be held accountable is not even mentioned. This may be why the characters’ journeys feel quite repetitive; it’s like playing a winning game of Minesweeper, there’s only one pattern you can click that works. (It’s also why he’s uniquely adept at putting together stories that center people of color while attracting all the sorts of audiences who can afford top dollar Broadway tickets, but I digress.) As backhanded of a compliment as this may be, ultimately what it boils down to is that Miranda is a top-tier crowd-pleaser, and please crowds this film certainly will.

In a way, the film does its job too well, setting up characters, relationships, and plotlines so efficiently within the first few musical numbers that the middle hour feels like the narrative equivalent of treading water. It almost seems like the film itself is aware of this fact in how it’s constantly trying new things stylistically. They don’t always work equally well, but the effort is always appreciated. One gravity-defying “dancing on the walls” sequence—that pulls a page from the book of the Fred Astaire film Royal Wedding—could have sincerely benefited from sticking even closer to the source material. Give me the slightly visible wires of the pre-CGI era over green screen uncanniness any day. The Busby Berkeley-esque handling of “96,000,” on the other hand, is as impressive as it is delightful, feeling true to the spirit of Highbridge Pool while also managing to make it feel just a little bit glamorous.

With Steven Spielberg’s upcoming West Side Story remake also on the horizon, it’s enough to wonder if In The Heights is a bellwether of things to come, and if the long-neglected movie musical genre might be gearing up to make a comeback. If this is the standard others will be held to, such a trend should be a treat indeed.

In The Heights is playing in theaters and streaming on HBO Max.