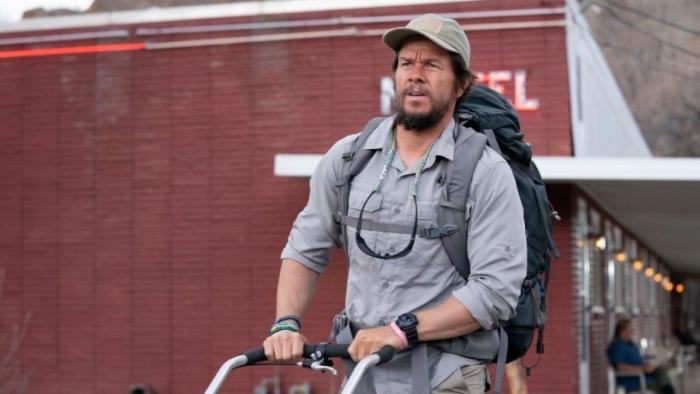 Warning: The following review contains spoilers for the ending of Joe Bell.

I wrote my honor’s thesis in college on Hunter Thompson, which I realize now makes me the literary equivalent of every douchebag who had a Scarface or Reservoir Dogs poster on their dorm room walls (no offense to my fellow HST enthusiasts). Specifically, the topic was how Thompson’s Fear and Loathing on the Campaign Trail ‘72 captured the essence of that Presidential election better than the political journalism of that day, even though HST’s book was fiction.

I mention this in the context of Joe Bell because it’s based on a true story, and here’s the thing about “truth”: It is an absolute defense to defamation, but it is a lousy defense for bad storytelling. Give me a well-told piece of fiction that captures the spirit of the truth over a sh*tty real-life story that fails to do so every single time.

There might have been a decent story somewhere in here about Jaden Bell (Reid Miller), the 15-year-old gay teenager at the center of the story who was bullied by his small-town classmates so brutally in 2013 that he died by suicide. This story, alas, centers on the teenager’s father, Joe Bell (Mark Wahlberg), a homophobic, abusive man, who has an epiphany soon after his son dies that he ought to walk across the country — from Oregon to New York City — to raise awareness about bullying because it’s what “Jaden would have wanted.”

It’s not entirely clear what Jaden would have wanted (except for his father to shave his hideous unkempt beard). Yet, his ghost trails Joe along the way, if only to keep Joe company and sing Lady Gaga songs out on the road with him. Joe often combats loneliness on his walk by having conversations with his son that he probably should have had before Jaden took his life. Joe calls home, too, and speaks with his wife, Lola (Connie Britton), who does her best Tami Taylor if Tami Taylor were married to Buddy Garrity.

Joe Bell wants to be a saccharine tearjerker, but the writing is shoddy, and Joe himself — despite his best intentions — is a hard person to root for, in part because, even after his son takes his own life, it takes another six months of walking before Joe can start to accept Jaden for who he is. It’s not that he didn’t love his son. It’s just that, you know, why’d he have to be so gay in the front yard instead of taking it out back so as not to embarrass Joe in front of all the neighbors?

I might have appreciated the movie in an afterschool special sort of way had it come out in the ’80s or ’90s. I can even acknowledge that it might even change a few minds in small-town America today if they see the guy from Deepwater Horizon preaching against bullying. Joe Bell is a bad movie, but it’s well-intentioned, even if it is misguided, and even if Wahlberg himself has a hard time committing to the required transformation.

But woof, that ending. What an absolute dogsh*t of an ending. I don’t feel too bad about spoiling the final minutes here because it’s based on a true story that you can easily look up on Wikipedia. Joe Bell walks for six months, and after a conversation with a police officer (Gary Sinise) who picks him up and brings him back to the station for a meal, Joe returns to his tent and finally accepts his son for who he is. Or at least, that’s what the movie wants us to believe. Did he? Who knows? No one can actually ask Joe Bell what he was thinking that night because the movie abruptly ends after Joe is run over by an 18-wheeler and killed!

To be clear, Joe Bell is a film about a man who walks across the country to raise awareness about bullying who is run over and killed halfway to his destination.

This is why — good intentions aside — they should have left this screenplay in the slush pile. What even is the message? Terrible things happen, and when someone tries to make lemons out of lemonade, a semi-truck will run his ass over? “But that’s how it happened!” is not a good defense. Not every story needs to be told, and this is certainly one that would’ve been best left alone because no matter what one might take away from the rest of the film, it’s the ending — the inexcusably awful final minutes — that’s going to be remembered. And, again, the truth is no defense to bad storytelling, and if reality doesn’t give a movie the ending it needs, don’t make the goddamn movie.

To briefly come back to Hunter S. Thompson and the “essence of truth,” it just so happens I watched this movie during the same week in which I read a novel by S.A. Cosby called Razorblade Tears. It’s about a Southern Black man and a redneck — both previously incarcerated people with violent pasts — who partner together to find the people responsible for killing their respective sons, an interracial married couple. The Black man and the redneck had a lot of problems accepting their sons for who they are when they were alive, but instead of pushing a shopping cart across the country and waiting for inspiration, they decide to make amends by tracking down their murderers. It imparts a lot of the same lessons about acceptance and regret that Joe Bell does, except that it’s also a brilliantly written Southern noir, an entertaining, moving, and cinematic crime thriller that someone should option into a movie as soon as possible. It may be fiction, but it captures the spirit of the truth far better than the true story of Joe Bell.

Joe Bell opens only in theaters on July 23.