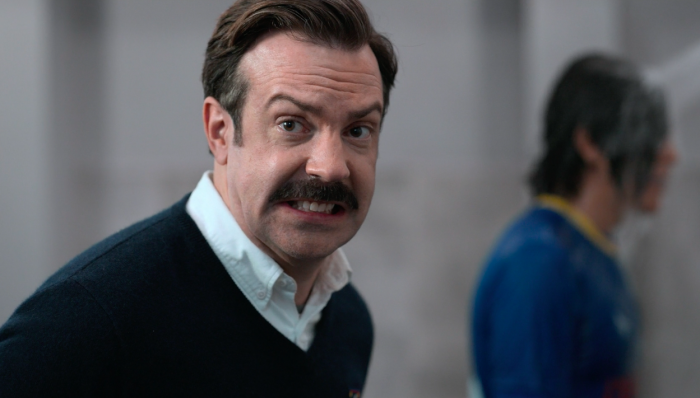 (spoilers ahead for the Ted Lasso premiere)

A tied game. An earned penalty kick. Victory is within grasp for AFC Richmond. Footballer Dani Rojas readies himself. His foot sends the ball flying through the air with the surgical precision he’s known for. It’s a meteor preparing to crash into their opponent’s goal. Success is imminent, the distance yet to be traveled a mere formality. The ball is going to land squarely into the net until, UNTIL…

Richmond’s canine mascot proceeds to leap in the air at the worst possible second, disrupting the ball from the intended destination with its dear head.

So begins the cold open for the season premiere of Ted Lasso. Starting off the first two and a half minutes of your highly-anticipated second season with an animal death is certainly a gutsy move. It’s a heck of a risk, but when a show is riding this high on success, there’s no better time to take chances—even if it involves an off-screen gag about a dog meeting its demise.

Unsurprisingly, the incident is brought up in the post-game press conference by none other than Trent Crimm of The Independent. Ted does his Ted thing when he proceeds to relay a lengthy allegory revolving around him being attacked by a dog when he was a boy only to later go on to take care of that very same dog when its owner no longer can. It hits just the right emotional pitch, but between you and me, it’s a bit of a stretch bringing that particular tale back around to the dearly departed Earl. Nonetheless, it’s an acceptable statement for the press. Ted and the team are ready to put this incident behind them in order to finally eke out a win in a season that’s consisted of nothing but ties so far.

Everyone, of course, except for Dani, who is capable of little more than standing beneath the running showerhead in full uniform as he fervently prays. Even Ted’s usual Care Bear stare can’t bring Dani out of the pit of hellish despair he finds himself in. Football is no longer life. For the previously chipper Dani, who now finds himself being violently awoken by memory-fueled nightmares, “football is DEATH.”

Tragedy aside, the season opener happily provides the audience with many of the old familiar faces. Rebecca walking and talking with Leslie. Coach Beard, Nathan, Keeley. Most of the cast are present and accounted for, though new faces are quickly introduced as well. There’s Jan Maas (David Elsendoorn), a new player whose frankness is off-putting until Sam explains to his teammates that it’s not out of rudeness, “he’s just being Dutch.” We also get to meet Will (Charlie Hiscock), the new kit man who’s been brought on to fill the void Nate left behind now that he’s fulfilling his assistant coach duties. Nate is rather hard on the young man, clearly projecting the seriousness and concern/anxiety he had when he previously filled that role. Thankfully, Will seems fairly oblivious to Nate’s harsh judgment, though Ted sees what’s happening and runs interference as necessary.

Of course, Ted, despite his remarkable emotional intelligence, still possesses a few short-comings. This becomes obvious shortly after we’re introduced to the sports psychologist, Dr. Sharon Fieldstone (Sarah Niles), brought on to assist Dani with his debilitating case of the dreaded yips. Despite the fact that Ted only wants the best for his players, he’s reticent when it comes to bringing a therapist into the mix. As the sagely Coach Beard points out, Ted prides himself on his ability to solve other people’s problems and is likely experiencing a tad bit of jealousy. Ted dismisses it (though I think there’s a small measure of denial happening there), owing it instead to his negative experience back when he and his now ex-wife underwent marriage counseling. His discomfort isn’t helped by the fact that Dr. Fieldstone—not ‘Doc’—isn’t as susceptible to Ted’s down-home charm as most people. Much of that can probably be attributed to the fact that Dr. Fieldstone, a Black woman who’s made a career in a field in which the vast majority of the people who call the shots are white, has had to work harder than everyone else (“Well, as good as you are at your job, I’m twice as good at mine.”). While Ted certainly holds a measure of respect for her professional skills, he’s still jealous (yes, he denied it but I’m going with the jealousy angle), especially when a post-session Dani comes jogging out to the field completely revitalized. Things only get worse for Ted when other players begin to flock to her office. Dr. Fieldstone recognizes what’s happening in Ted, though she has little time nor inclination to attend to his feelings, as implied by her closing the door on him as he stares into her occupied office, looking for all the world like Kay in the final scene of The Godfather.

Meanwhile, Rebecca, who’s now getting back into the dating game, has recently been seeing a man named John Wingsnight (Ted: “‘His name’s John WingsNIGHT? Like at a sports bar? Like ‘Monday night’s wings night down at PJ Flatts,’ like that?”). In need of friendly support, Rebecca invites Keeley and Roy on a double-date. The banter over dinner is fine enough. John is one of those men who’s prone to name-dropping and laughing just a smidge too loud at their own jokes, but he’s decent enough and certainly seems fond of Rebecca for all the right reasons. After dinner, Keeley confirms that John checks off all of the boxes for a suitable partner. It takes the prickly Roy to drill down to the truth of the matter, which is that despite his ability to meet most standards, John isn’t worthy of Rebecca. His words catch Rebecca off-guard, but several days later, she begins talking to John over coffee and, to the surprise of both, ends up breaking up with him. I have nothing but appreciation for this story line. It’s all too easy to have women romantically pair up with the first decent fellow who comes along, especially if that woman happens to be middle-aged or older. Rebecca is an amazing person and Roy is absolutely correct in his assessment that she should hold out for something truly great.

Speaking of Roy, the recently retired professional athlete has happily moved on to coaching. It’s a completely natural fit for this lauded footballer, never mind the tiny fact that the team he’s now overseeing consists of a bunch of eight-year-old girls, with Roy’s adorable niece Phoebe among them. When he’s not hurling epithets at a bunch of children, he spends his evenings hanging out with his yoga mom friends while drinking wine and watching reality tv. It’s the perfect existence for him, though Keeley suspects there’s something missing in his life. She suggests that he accept an offer to be a football pundit on a major network, which he immediately rejects. Keeley later apologizes for putting any sort of pressure on Roy (pushing them ever closer to the list of ‘Healthiest TV Couples Ever’), clearly accepting him for the youth football coaching, rosé drinking, reality show-watching man that he is.

Thus far, the second season of Ted Lasso is off to a promising start. There’s some action going on, but most of the episode is planting seeds for the season to come. Rebecca’s arc (which was so mind-blowingly wonderful last season) should be fruitful, as it appears we’re going to see her continue to evolve from being a woman trying to heal from a painful past into the woman she aspires to be. We also need to wait and see how and when Roy will confront the fact that his willingness to turn away from nearly anything football-related has less to do with him enjoying retirement and far more to do with him missing it like hell. The one thing he certainly didn’t miss was his old nemesis, Jamie Tartt, who made a surprise appearance at the very end of the episode on the reality show Roy had previously gained mindless comfort from. For now, however, I’m pleased with the personal leaps that have happened already, especially with Roy’s increasingly healthy masculinity and allowing himself to be emotionally invested enough in other people to tell them the truth (in the classic Roy Kent manner). It’ll also be interesting to see if Ted does some deeper introspection into exactly why he feels threatened when there’s another person around who’s more suited to fixing problems outside of his scope. This season could end up revealing a more flawed and complex side of Ted, which some critics believe is just what’s needed to round his character out more. We’ll certainly have more time to devote to each of our beloved characters, as this season has been stretched out to twelve episodes this time around. Some may doubt that this sweet little sports show can adequately fill out six plus hours of content. While this may be optimistic (what better inspiration to exercise full-hearted optimism than this series?), I urge them to bear in mind the crooked little yellow sign lovingly taped above the coaches’ office door: “Believe.”

Rebecca Welton: What do you say to a cocktail, Coach Lasso?
Ted Lasso: Oh, the same thing I’d say to Diane Sawyer if she ever asked me out on a date: yes, please.

Roy Kent: It’s a shit job for shit people, I’d rather shit out my own fucking mouth than do that fucking shit.

Roy Kent: He’s fine, that’s it. Nothing wrong with that, most people are fine. But it’s not about him, it’s about why the fuck you think he deserves you. You deserve someone that makes you feel like you’ve been struck by fucking lightening. Don’t you dare settle for ‘fine.’

Kaleena Rivera is the TV Editor for Pajiba. When she isn’t wondering if there’s a real Barkingham Palace (a quick search shows it’s actually a surprisingly common name for dog kennels in the U.S.), she can be found on Twitter here.

← Review: The Drab, Tiring 'Snake Eyes' Tunnels Under an Already Low Bar | The World Burns and We Can't Put It Out →