Review: Sally Potter’s ‘The Roads Not Taken’ is a Plea for Compassion in Not Only These Turbulent Times, But All Times

Sally Potter’s filmography is an eccentric collection of historical dramas and romances, mid-century portraits of friendship, and more contemporary observations of the strangeness of the world around us, like the politically charged The Party, her black-and-white ensemble comedy. Her latest, The Roads Not Taken, is not as narratively straightforward as any of her preceding works, but it delivers an unbelievably clear plea for compassion.

Distributor Bleecker Street of course didn’t know that our world would be in the grips of a pandemic when the film was released, but this message is relevant not just for our current time, but any. (The film is dedicated to Potter’s brother Nic, who suffers from a type of dementia.) The question of what we owe each other as a society, as a culture, as a people is asked semi-regularly in philosophy and pop culture (what else is The Good Place if not this query in television form?), and what Potter posits in The Roads Not Taken is a call for patience and an extension of empathy. Is your life really inconvenienced by benevolence? What does it truly cost to be generous toward someone you don’t know? Or, more complicatedly—to someone you do know, but don’t like? 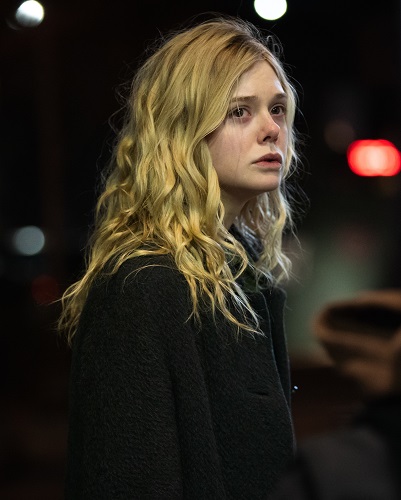 The Roads Not Taken tracks a father/daughter duo, Leo (Javier Bardem) and Molly (Elle Fanning), over the span of 24 hours in New York City. Leo lives alone in a run-down apartment next to train tracks, his only companion his home helper who picks up after him, tidies up his place, and makes sure he’s safe. Whether Leo is doing well is another question. He seems to recognize Molly, but only infrequently. He can barely talk. Sometimes, he calls out for Nestor, the family dog who died years before. Molly’s tasks for the day are to take him to the dentist and the ophthalmologist, and she hopes to be into the office at noon—but each endeavor results in an unanticipated complication.

At the dentist, Leo can’t keep his mouth open, drinks the mouthwash they give him, and urinates in the chair. “Does he understand English?” the dentist asks Molly judgmentally; her “Of course he does. He’s lived here for over 30 years” has all the exasperation you would expect. Molly is determined to keep a cheery face on her father, to keep him laughing and to keep his mood pleasant throughout this day, but every moment she faces someone else’s judgment, impatience, or dismissal, her goal becomes a little bit harder to maintain. Of course, getting her father to remove his wet pants is difficult, and the fact that she loses track of him in a big-box store is terrifying. But what is more degrading, over and over again, is how people treat the two of them together, and how they diminish Leo’s selfhood by acting like he’s not even there.

All of this is in contrast with the vibrant inner life we see in Leo’s mind. At first, these other scenes seem like memories, perhaps a life before Leo married Molly’s mother Rita (Laura Linney) and before they had their daughter. There is a Leo in Mexico, with longer hair and a patchy beard, living in a bright pink home, driving a pickup truck, and married to the passionate, grieving Dolores (Salma Hayek). This Leo lost a son, a boy who Dolores wants to honor during the Day of the Dead, but Leo is resistant, calling the tradition “an old superstition” that means “nothing” to him. And there is also a Leo in Greece, drinking at a bar on the beach, sitting at a table overlooking the water, jotting notes down by hand in a little journal. This Leo is working on a novel but can’t work out its conclusion, so when two young women arrive at the bar, he asks for their opinion.

“What kind of endings do you prefer? In books?” he queries, but Potter’s script is pulling meta double duty here—because we understand, as viewers, that Leo is really asking about himself. What is revealed as the film progresses is not that these are memories for Leo, but different paths that could have shaped his life, the titular “roads not taken.” If he had stayed in Mexico and married his childhood sweetheart Dolores, a relationship that would have experienced tragedy when their young son was killed in a hit and run. If he had, when married to Rita, fled for Greece after Molly was born, escaping the difficulty of raising a newborn to focus on his own book. What happened instead is the life we see with Molly: Divorced from Rita, who became a more famous and successful writer than he ever was; adored by Molly, who admits, in a moment of heartbreaking honesty, that caring for her father has become too challenging to tackle by herself (“I can’t pretend anymore … I’m lost. I’m completely lost. Where have you been all day, Dad?”); and unable to communicate with those around him, to share his caring for them, his love, his appreciation, his anger, his frustration.

Bardem’s performances here are impressive because all the versions of Leo have similar characteristics and overlapping traits, but the minute differences show how our choices in life set us upon a number of different paths we could imagine, puzzle over, become obsessed with—but never truly know. If Leo had never left Mexico. If Leo had decided to stay just one day longer in Greece. Those don’t exactly seem like life-changing decisions when they’re made, but they eliminate anything else that could have happened and make concrete what is. Potter makes these particularly clear with her choice of accompanying details in Leo’s stories—in the train tracks that run outside his apartment, the ones that could carry him anywhere; in the small rowboat Leo boards in Greece, wearing out his body as he battles against the tide. He is living vibrantly, and melancholically, in his mind, and while Molly can’t decipher any of it, she loves Leo regardless.

So much of The Roads Not Taken is focused, actually, on that word: regardless. Regardless of how Leo acts, Molly loves him. Regardless of how Molly treats Leo, Rita knows he needs more attentive care. Regardless of how confused Leo may seem, the young brown men who take him in, when he appears at their garage in the middle of the night, treat him gently, bringing warm water for his torn-up feet and a blanket for his cold body. “Right now he’s here, and he needs our help,” says Rahim (Waleed Akhtar, of The Wedding Guest), and that line is one of the purest expressions of Potter’s intention here. Be a helper. Don’t be one of those people who jokes about killing sick people (another narrative element that comes up in this film and feels prescient). Try to understand, to take a moment and imagine what someone else might be feeling, suffering with, living through. “However far away you go and whatever they say, you are always you,” Molly says to Leo as her final lines before the film envelops her in its formula, with a version of Molly staying with her father and another version of her leaving him alone. It’s a clever ending for a film that is interested in experimenting with countless realities at the same time, but what is essential, in whatever timeline, is the plea for us to be kinder to each other. In this time, or any other, The Roads Not Taken resonates.

The Roads Not Taken is currently playing in limited release around the U.S.

← 'Tiger King's Joe Exotic Wants A Pardon From Trump And $94 Million | Pandemic Productivity: The Strange Pressure to be Publicly Busy During Self-Isolation →