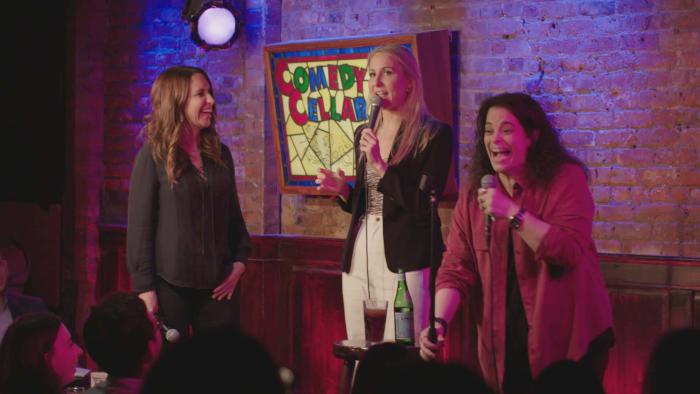 It’s almost impressive that at only three-words long, “women aren’t funny” manages to be one of the dumbest sentences ever uttered. Dedicated “to all the women who ever braved the stage,” Hysterical is a refreshing look at the world of stand-up comedy from the women’s point of view. In fact, not a single “talking head” (documentary speak for the interview subjects) is a man and except for some clips pointing out rampant sexism and a few shots where director Andrea Nevins’ camera captures a table of comics talking at a club, there is not a man’s voice to be heard. Instead, the talking heads cover a spectrum of old guard and new female stand-ups, including (among many others) Judy Gold, Margaret Cho, Lisa Lampanelli, Nikki Glaser, Jessica Kirson, Iliza Shlesinger, Marina Franklin, and my current favorite working stand-up, Fortune Feimster.

Director Andrea Blaugrund Nevins’ documentary is broken up into seven-or-so sections starting with “Section 1 - Childhood - When girls learn what they can’t do,” which casually introduces us to a number of female comics and their origins in the comic world. For anyone used to seeing documentaries about stand-up comics, it almost feels run-of-the-mill except for one key difference. For male comics, it’s usually as simple as “I was very funny, and I didn’t fit in or couldn’t do anything else.” For female comics, it’s still that, but there is also some version of rebelling against the implicit and explicit misogyny and sexism of our society. For example, Glaser talks about her beautiful sister and how people would constantly come up to her telling her she should be a model, completely ignoring poor Nikki standing right next to her. Or as Kirson puts it even more simply, “it goes back to childhood, always wanting to be seen and heard.”

With the groundwork set, Hysterical then turns to its real theme, that dumb claim that “women aren’t funny.” Rather than bothering to show us why that’s such a dumb statement, the film instead deftly unpacks how and why it became so engrained in the scene, and what a struggle it has been for female comics to rise above those three brutal words. At the highest level, of course, there was just the wildly open sexism that is highlighted here with clips of men like Jerry Lewis and Howard Stern absolutely shitting on the very concept of female comics, or the gross ways male MCs would frequently introduce female comics, knocking them down a peg before they even got on the stage. As one woman put it, “I had never understood sexism until I got into the comedy scene.”

From there, the documentary looks at many of the more nuanced ways the industry (following broader themes in society) was a deck stacked against female comics. For example, limited opportunities forced female comics to compete against each other. While male comics could look as gross or slovenly as they wanted, women were of course drastically judged on their appearance. Bill Hicks or Sam Kinison could rage on stage and be “celebrated for their anger,” but an angry female comic was “hysterical.” Even more recently, Kathy Griffin was practically run out of town for a bloody-head Trump joke, while male comics still “joke” about gang rape without a ramification to be seen.

Late in the film, Hysterical pauses for a moment to talk about Kelly Bachman, a young comic who gained notoriety in 2019 when clips went viral of a comic fundraiser where she unloaded on the fact that Harvey Weinstein was in attendance. It’s searing and raw and important. As one commenter puts it: “The fact that these women can get on stage and talk about rape - that’s feminism. Because women have been silent about this for hundreds/thousands of years.” And that’s really the heart of this film. The world of comedy has tried to keep women down, as has the world writ large. Hysterical shows how early trailblazers like Moms Mabley, Phyllis Diller, and Joan Rivers started to fight back, and how they set examples for future generations. (As one comic notes of seeing Rivers as a guest on The Tonight Show with Johnny Carson: “This brash Jewish woman on TV, with opinions … on with the whitest guy from Nebraska, making him laugh?”)

And so the path was set for women like ’80s mainstays Whoopi Goldberg and Paula Poundstone who, in turn made it possible for us to have Amy Schumer, Tina Fey, Ali Wong, and Fortune Feimster. Women are allowed to get on stage and talk funny about things that matter. As Glaser says, “I want other women to feel less alone, which is why I talk about sex all the time.”

We don’t need to be told the fundamental fact that women are funny, nor do we need to be told why women are funny. Rather (and just as in many facets of life today), we just need to get the hell out of the way. Hysterical offers a loving appreciation for how far women comics have come (while acknowledging that there’s work still to do - “it’s definitely going in the right direction for women of color, but there are still roadblocks”) and emphasizes that we just need to let funny women get on stage and be funny. And angry. And insightful. And inspiring.

Hysterical had its World Premiere at SXSW Online 2021, premieres on FX on April 2, and will be available via FX on Hulu starting on April 3.