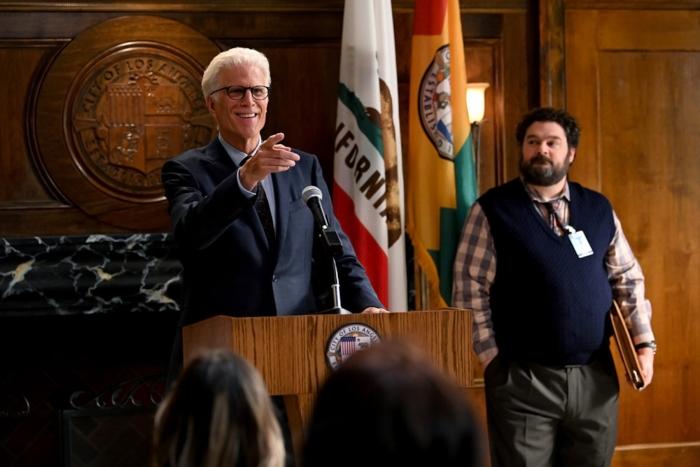 It’s hard to judge a sitcom by its first few episodes. Famously, some of the best sitcoms of the last two decades had rocky to downright bad first seasons — The Office, Parks and Recreation, Schitt’s Creek, and even 30 Rock, the NBC sitcom from Tina Fey and Robert Carlock, who currently bring us the Ted Danson vehicle, Mr. Mayor.

The sitcom is about a retired, billionaire billboard mogul who runs for mayor on a whim after the previous position-holder abruptly quits, citing, uh, 2020. Neil Bremer (Danson) is oblivious and, based on the first two episodes anyway, the kind of good-natured but dim white guy who backs into victories by virtue of being rich and privileged, as opposed to Brandon Micheal Hall’s similarly themed 2017 sitcom The Mayor, which leaned harder into Parks and Rec sweetness and featured lessons learned the hard way: From actual mistakes.

The juxtaposition between The Mayor — about a young Black mayor who is trying to make a difference despite being in over his head — and Mr. Mayor, about an old, rich white guy who bumbles into success, maybe best illustrates why Mr. Mayor is so wrong for the time (aside from the obvious Trump comparisons). Mr. Mayor shares a similar style and sense of humor with 30 Rock and Unbreakable Kimmy Schmidt, and while I do like Tina Fey, unlike Michael Schur, she and Carlock haven’t evolved with the times. Mr. Mayor feels like a show that could just as well be set in 2011, right down to its outdated jokes (to wit: Wordplay involving a Latino man named Manny Pedi, who is getting a manicure and a pedicure 👀).

That is why I worry, despite the talent in front of and behind the camera, that Mr. Mayor is not likely to struggle in its first season to find its voice, because it’s already found it. It’s the sort of tone-deaf voice that comes from someone like Fey who refuses to engage in a “culture of demanding apologies,” which is understandable unless you have something for which to apologize. It’s kind of smug to completely check out of a process that occasionally asks you to reexamine your work, but! This is a review of a sitcom, and I’m getting off track, where I meant simply to say that, like Kimmy Schmidt, Mr. Mayor feels more fully formed and sure of itself straight out of the gate, and it hasn’t left as much room for improvement.

That is especially true, it seems, of Holly Hunter’s character, who is essentially Carrie Fisher’s character from 30 Rock if she were made the over-woke deputy mayor of Los Angeles. It’s not that I mind the mockery of her wokeness, it’s that turning her into a hippie-liberal parody, Fey and Carlock rule out the possibility of the audience liking the character. And that, essentially, is what’s most wrong with Mr. Mayor — they’re not characters so much as they are targets for ridicule, which is fine. Ted Danson, after all, has impeccable comic timing, but so does Alec Baldwin (for whom this role was originally envisioned). What’s the point of casting Ted Danson if you’re not going to take advantage of what makes him Ted Danson?

The same is true of much of the cast, which is full of familiar and likable faces who haven’t yet been given the opportunity to be likable. Kyla Kenedy, the daughter from Speechless, plays the mayor’s daughter; Vella Lovell, the surly best friend from Crazy Ex-Girlfriend, is neither surly nor particularly fun here; and Bobby Moynihan plays essentially the Jerry Gergich of Mr. Mayor, although inexplicably he ends up being maybe the best character on the show through the first two episodes. I like Moynihan, but when he is the best part of a sitcom that also stars Ted Danson and Holly Hunter, there may be a problem.

Nevertheless, the dearth of sitcoms at the moment means that I’m not going to give up on Mr. Mayor for a few weeks, at least, and maybe it will find a different footing. But that would require some reexamination from Fey and Carlock, and as we know, Fey doesn’t do reexamination. After 11 seasons of 30 Rock and Kimmy Schmidt combined, there’s nothing to suggest that the formula has changed in Mr. Mayor, nor does there seem any appetite to change it. Fey and Carlock seem to subscribe to the belief that, “if it ain’t broke, don’t fix it.” But how will they ever know it’s broken if they never inspect it?