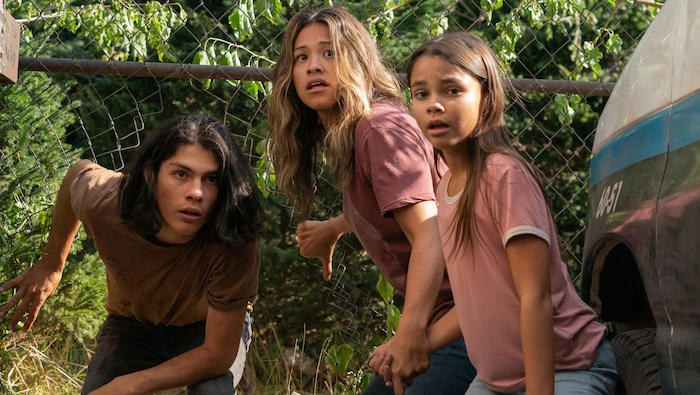 Now on Netflix: ‘Awake’ Tries its Best to Keep Your Eyes Open

Being well into the second year of an international crisis and the sleep disturbance associated with it, I couldn’t imagine wanting anything less than a disaster movie about sleeplessness. Still, Awake almost had me. The newest take on the impending apocalypse posits a world where humanity loses the ability to sleep, then asks the audience to stay awake as the characters fumble by doing the same.

Veteran mom Jill (Gina Rodriguez) is tired. After a battle with addiction, she’s getting her life on track, working nights as a security guard, and rebuilding her relationship with her children. Struggling to make it through the day, Jill grabs her kids from their grandmother for a short, mandated visit and hits the road. What should be routine turns disastrous when they suddenly lose power and control of their car. In the blink of an eye, they’re smashed by a speeding vehicle. Jill, her daughter Matilda (Ariana Greenblatt of Avengers: Infinity War), and her son Noah (Lucius Hoyos) barely make it out alive. The family leaves behind the dead car and tries to sleep off the bad day, but they can’t. Overnight, the world realizes that humans have lost the ability to sleep. Almost all of them. Except Matilda. Through her old military contacts, Jill learns that the government is planning to study anyone who is still able to sleep. Having witnessed firsthand the lengths the military will go through to find answers, she plots to take her children on the run. But as the world turns apocalyptic with the time for survival running short, she’ll have to make some difficult decisions to help her family. To hell with humanity.

There’s a sense the film is trying to reconcile heavier themes about torture, PTSD, and the abandonment of soldiers after they return home from war. But not enough time is spent discussing these themes save for peppering them in to explain how insider knowledge drives Jill’s actions. No time is spent on how the military broke and abandoned her. And her confession about her regrets seems purposeless since we’re not meant to view the character as an anti-hero. It feels like a shallow exploration with no purpose above a throwaway line about the horrors of war that don’t match the film’s tone.

The set-up is a simple twist on the disaster movie: a lack of answers or resources and the world falling quickly into a panic sends the Working Class Hero into the fray to save her family with quick decision making. Together, they must best frightening religious leaders and their dangerous congregations, escaped convicts, and the big bad military. Yet the biggest threat is not a monster or meteor, but the lack of sleep. Director Mark Raso and his co-writer Joseph Raso deliver a fantastic premise where lack of sleep makes for a brilliant ticking clock; everyone is racing against their own deteriorating brain. Humanity isn’t just mired by regular paranoia, but the loss of rational thinking caused by sleeplessness that makes their conspiracy theory assumptions feel all the more fathomable.

Shrewdly, the Rasos use the failure of all electricity as a smooth get-out-of-jail-free card to focus on a small geographical area. The abrupt death of radio and television news allows for the narrative to stay both contained and mysterious. It’s a small story, of a small county and a few people, not of War Of The Worlds’ tripods smashing through New Jersey. It keeps the focus on Jill’s story, giving it room to exist, instead of getting distracted with broadcasts that ask what might be happening in a city that doesn’t sleep.

Where the story fails is in building suspense. Most disaster movies set up some plan to build toward. Is there really an escape pod, like in Greenland? Is the family still alive, like in War of the Worlds? Will the army protect them, like in The Happening? Is the CDC onto anything, like in Contagion? But the characters in Awake never have a plan, so it’s hard to feel tension as they meander through obstacles. Without a clear quest charted, Jill and her family bob around a wasteland.

As a result, Awake never rises to the level of intensity of its cohorts like Crawl or The Crazies. Instead, it keeps reminding you how tired you are, without any perceivable endgame or rising tension. So, it’s easy to want to doze off. But your eyes will stay peeled for the performances of its leads. It’s nice to have a woman, specifically a woman of color, in the Working Class Hero role and Rodriguez is compelling as the mother who knows how to use a weapon. It’s reminiscent of her work in Annihilation with a sprinkling of softness that comes from the “caring mother” elements of the role. Jennifer Jason Leigh can play the untrustworthy-leader-with-questionable-motives in her sleep Still, she devours her part as the sleep deprived military scientist trying to save humanity at any cost.

Nonetheless, this disaster film is fine addition to the canon, doing just enough different in the way this year’s Greenland did. Regrettably, its premise never allows it the space to build suspense, so the ordeal feels like watching a zombie movie where everyone has already been bitten.


← 5 Shows After Dark: 'New Amsterdam' Season 3 Finale, 'America's Got Talent' on NBC | Karen Allen: Indiana Jones Did Not Take Advantage of a Child →