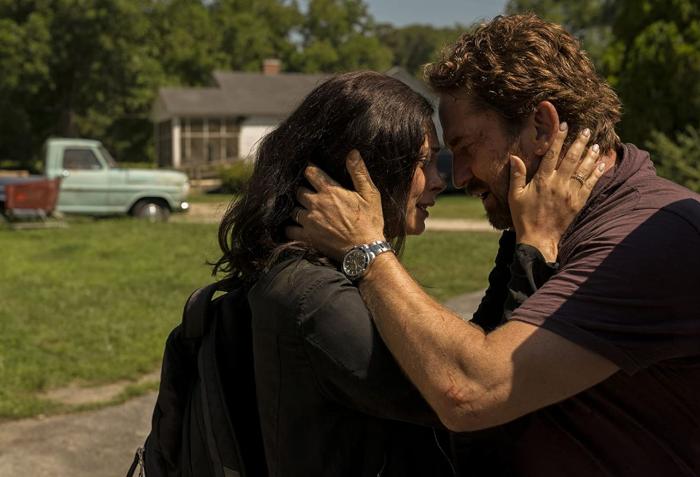 Review: 'Greenland' and the Anti-Nic Cage Appeal of Gerard Butler

I’m not sure what to call the category, but I tend to classify Nic Cage, Jason Statham, and Gerard Butler together based on the kinds of movies they make, especially later in their careers. Any of the three could as easily show up in a movie that makes $200 million at the box office, or a straight-to-digital release that divorced middle-aged men pick up at Redbox on their way out of Kroger after buying a six-pack and a frozen pizza. Each of these actors seems to serve a specific kind of purpose in these films: Nic Cage is often the bizarre character in a normal situation, while Jason Statham takes a bizarre premise and amplifies it.

Gerard Butler, however, is something akin to the anti-Nic Cage: He is the grounding force in an otherwise bizarre situation. Butler buys into the premise, and no matter how bonkers it is, Butler completely invests himself into the fiction. His characters do not question the insane circumstances in which they are thrown. Gerard Butler’s career over the last six or seven years is basically Harrison Ford in Air Force One: The serious, somber man in the midst of chaos. Butler doesn’t try to out-crazy anyone; Butler’s job is to convince us to ignore the absurdity of a geostorm and just go with it. He attacks every role — no matter how absurd — with the same deadly seriousness that Mark Wahlberg employs in every blue-collar everyman he’s ever played. It’s not to say that Butler isn’t in on the joke; it’s Butler’s role, in fact, to sell the setup, otherwise the punchline falls flat.

Greenland is the latest Butler disaster pic, which comes from Butler’s Angel Has Fallen director, Ric Roman Waugh. And this one is actually good, and not just in the Gerard Butler sense, although that, too. Butler plays John Garrity, a Gerard Butler character who is estranged from Morena Baccarin’s Allison Garrity, because he cheated on her. Though separated from his wife, John — a structural engineer — returns home to host a party with neighbors. During the course of the party, he receives an alert notifying him that he and his family have been selected for emergency sheltering. The comet that everyone thought was going to safely crash into the ocean, it turns out, is actually expected to lead to an extinction-level event that will wipe out 75 percent of the population.

Minutes after a comet fragment vaporizes part of Florida, Garrity grabs his wife and kid, Nathan, and heads to the pick-up location at a military base, from where he and his family are supposed to be flown to a shelter in Greenland, where people with specific skills useful in rebuilding the planet will live in a bunker. John and Allison reach the military base without any real hitches. However, they soon discover that they’re being rejected because their son has diabetes, and people with medical conditions are not allowed to propagate the species, I guess. John, Allison, and Nathan are subsequently separated, and the lion’s share of the movie is about John’s efforts to reunite with his family and figure out how to get to the Greenland bunker before the comet wipes out most of humanity.

There’s absolutely nothing original about Greenland — it’s a conventional but solid disaster pic — but the budget ($35 million, a relatively small amount for this kind of movie) forces Ric Roman Waugh to keep the focus on the characters rather than the spectacle of comet fragments lighting up the planet. There is a lot of time spent in the car with various configurations of characters (David Denman and Hope Davis also figure in as a couple trying to secure a place in the emergency shelters), so there’s more conversation than might be typical of this kind of film, where most of the dialogue is limited to, “Whoa!” and “Damn!” and “Ahhhh!” when things go kablooey.

Butler does what he does, though, and that’s what makes Greenland so successful: He keeps his wits about him and tackles each problem with level-headed confidence. Baccarin is a solid partner here, too, because — despite their estrangement — their priorities are similar, and they both remain focused on their kid. It’s a good dynamic and their relationship is credible even amid the chaos of the impending end of the world. It is a disaster pic, but it often feels more like a family drama, and that is to the credit of Greenland.

In spite of that, however, I do not want to take anything away from the fact that it is also pure dumb fun, the kind in which Butler fans revel. It is, after all, a movie about a man and his family trying to outrun a comet, and at the end of the day, that’s what people are paying to see.