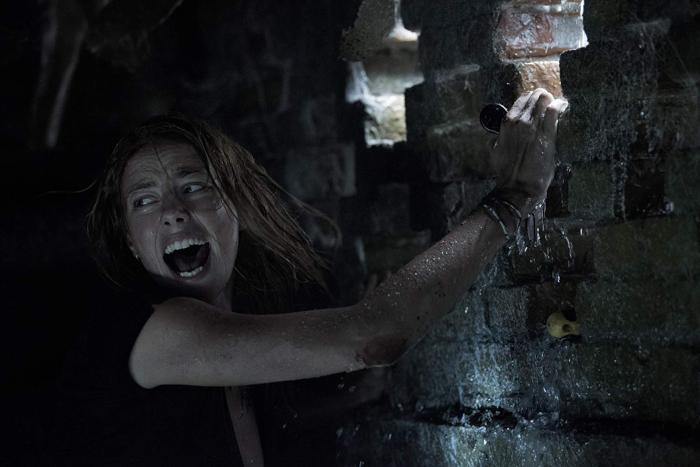 There’s a dark humor at play in Alexandre Aja’s latest horror offering. The twisted mind that brought us High Tension and Piranha 3D has returned to the water for Crawl, a creature feature about a day so terrible, horrible, no-good, very bad, that’s its bitingly comical.

Haley Keller (Kaya Scodelario) is having a bad day from jump. She was off her game in swim practice, falling behind her teammate in the pool, and putting her athletic scholarship in jeopardy. Then she gets a nagging call from her older sister asking if she’s heard from their estranged dad. She hasn’t. But with a hurricane roaring toward Florida, Beth is worried about him. So Haley volunteers to drive two hours in relentless rain to check on the stubborn old bastard who won’t answer his phone. The roads are washing out as she careens to her childhood home. And things don’t get better once she’s inside. Following the sounds of his FM radio, she tracks her dad (Barry Pepper) to the crawl space beneath the house. It’s full of mud, rats, and even a couple of rotting raccoons from forgotten pest cages. The roof is so low that she has to crawl through all of this muck in her search. Soaking wet, coated in gunk, and already fed up, she discovers her dad unconscious and bleeding in a far corner tucked behinds some plumbing pipes. With a Category 5 on its way, Haley scrambles to drag her deadweight dad to the crawl space’s stairs. And that’s when she sees the gator. Or—more precisely—that’s when a massive alligator bursts through the rickety wooden stairs, splintering them to useless shards before chasing her and her human cargo back to his hiding place. And this is just the beginning.

Written by Michael Rasmussen and Shawn Rasmussen, Crawl combines the creature feature thrills of Jaws with Aja’s predilection for ghoulish overkill, and a deeply dark vein of humor. You’ll root for Haley, her dad, and their scrappy dog Sugar as the three of them must outwit and outrun these snarling gators again and again as the water’s rise. The plot structure chases them from the crawl space to the house’s first floor and beyond. It’s reminiscent of a video game’s leveling up, especially as acquired tools like cell phones, screwdrivers, and flares become crucial. But for every time it seems Haley gets a win, the Rasmussens revel in knocking her down a peg with increasingly absurd twists of fate. Basically, the princess is in another castle. And to get there you have to wrangle with more gators in more absurd settings.

For much of the film this is great fun. The cracking lighting, dark water, and shadowy corners offer plenty of opportunity for jump scares centered on glinting eyes, swinging tails, or snapping jaws. It’s delicious to scream along with an amped audience as Haley has another harrowing encounter with a ravenous gator. Scodelario brings a Die Hard/John McClane energy to the film. She’s never totally out of her depth, but also is charmingly outraged by her circumstances. Sometimes her frustration is funny. With a clear nod to Jaws’s Brody saying “Smile you son of a bitch,” her outbursts brings levity by puncturing tension. But as she limps into the third act (her bare feet also bit up by shattered glass), the vibe shifts from exciting to disconcerting. Will our action heroine survive like her forefathers did? Aja’s not known for happy endings, you might worry this Final Girl won’t make it to the final scene. The tone becomes mean-spirited and menacing, as if maybe we weren’t meant to whole-heartedly root for Haley. Maybe deep down, Aja and the Rasmussens want to see a pretty, athletic, and brave girl be ripped to pieces. Admittedly, this sneaking threat soured the final act’s fun for me a bit.

Still, fans of gore will be glad to know there’s a buffet of tertiary characters who are little more than meat puppets for the grinder. Some looters here, some policeman there appear just long enough to signal hope to Hayley before being mercilessly eaten alive. The R-rating means Aja doesn’t have to hide the blood or dismemberment. So there’s plenty of it. He also uses smaller moments of graphic violence to get big reactions, like a scene where Haley’s dad has to reset a bone using a tool belt and a wrench. The wet snap alone would be enough to turn stomachs, but Aja wants you to see it click back under the flesh, and imagine how that’d feel, that hot, wet, agonizing snap.

Moments like this are paired with earnest heart-to-heart talks between father-and-daughter to be sure you’re invested in whether they live or die. And it works well enough even if the treacly talk feels achingly transparent, especially when her dad’s pep talks remind her how he always called her an “apex predator” at swim meets. (Get it? Like alligators are apex predators!) However, the suggestion that Haley’s real enemy—be it in the pool or in this flooding crawl space—is only her self-doubt is wincingly ham-fisted. Basically, Crawl works best when it’s just about a kick-ass heroine fleeing from or fighting gators. But even that gets a bit tired, when Aja doesn’t know when enough is enough. And so we sit uneasy, even as the movie promises it’s nearly over. The storm has nearly passed. But we can’t stop looking for gators.

Crawl is now in theaters.