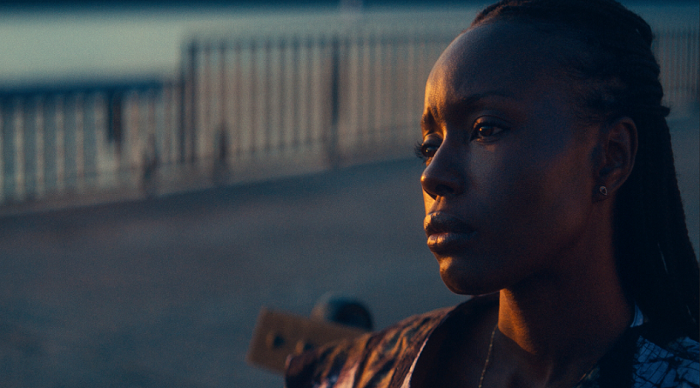 The feature directorial debut from American filmmaker, Nikyatu Jusu, Nanny has a lot of things on its mind. The almost distractingly beautiful Anna Diop (Us) stars as Aisha, an undocumented Senegalese immigrant living in New York City, who takes a job as a nanny for a wealthy American couple in the hopes of getting closer to her goal of making enough money to bring her young son over the ocean to live with her. Over the course of a fairly brisk 98 minutes, Nanny uses a bold color palette and strong performances to empathetically explore the immigrant experience, weaving in themes of family, community, capitalism, West African folk tales, and shades of horror in the process. While it ultimately doesn’t come together strongly enough as it first appears it might, it still stands as a promising debut and a sign of a director to watch.

Appearing in the vast majority of the film’s run time, Anna Diop anchors Nanny, creating a believable and sympathetic human being with her performance that admittedly feels a tad more developed than the script from which she is working. It’s not that she’s badly written per se, it’s that there isn’t as much to grasp onto as there could be. As the film goes on, and Aisha dives into her work for Amy (Michelle Monaghan) and Adam (Morgan Spector), she finds herself fraying at the edges, her ever more demanding employers asking her to stay longer and longer, at very short notice, all the while forgetting to pay her for multiple shifts or initially paying less than the agreed rate and subsequently having to be corrected by Aisha. There’s a case to be made that the ways in which Aisha can sometimes feel underwritten might be intentional—it would be an effective way to convey how the unyielding grind of capitalism can dissolve a person’s individuality and their character—but I’m not sure that’s the case here. If it is, it could have been done a bit better. There are flashes of other facets of her personality, but unfortunately too often Aisha’s character seems reduced to the status of ‘mother’. Granted, that is the key driving motivation, but in the few fleeting moments with her friends or a lover peppered throuhout we glimpse other sides of Aisha that, had they been given more time, might have led to an even greater investment in her story.

Nanny’s greatest asset aside from Diop is its visuals. In the era of new studio cinema (Netflix, Amazon, etc.), so many films are being released that look like they were made by people with zero awareness of the fact that they are working in a visual medium. I’m not going to speculate what the cause of this is—though the ever-diminishing presence of the big cinema screen in the industry must surely have a part to play—but the fact of the matter is that even films made by directors who have otherwise distinguished themselves with other projects so often end up looking like AI-generated algorithmic content with zero character or panache rather than actual cinema. It’s all drab, anonymous interiors and CGI-ed exteriors and landscapes devoid of any actual atmosphere that look like they were made to be the default wallpapers on the PCs in a 2000s-era middle school. Nanny bucks that trend with panache, frequently saturating its frames with rich dollops of color and featuring some interesting and evocative compositions courtesty of cinematographer Rina Young (Euphoria, Top Boy).

Contrast is the name of the game in Nanny, with Aisha’s world of warm community salvaged from a hostile place constantly coming up against the sterile and cold wealth of her employers. A feeling of dread and unease suffuses the film, beginning right at the start and never letting up before building to a crescendo. At first, we assume that Aisha’s sense of dislocation and the low-key classist and racist antagonisms (masked behind insidious liberal platitudes of course) that she faces in this world is the root cause of it, but gradually we begin to suspect something else may be at play. Those striking colors deepen our suspicion, tugging at our subconscious that something is not quite right with what we are seeing, contrasting uncannily against the banal surfaces in the wealthy couple’s home: Sickly, almost otherwordly yellows cast a glow on corners and faces; too-bright greens emit a radioactive warning; and reds that speak of blood and danger signal evil omens.

While thematically Nanny mostly succeeds, dramatically it makes a too few many missteps that prevent it from really shining. It largely avoids the heavy-handedness, melodrama, and misery p*rn that so often comes with these kinds of stories, but it at times feels like in doing so it has swerved too far in the other direction: It can come across a bit slight, a bit slow, and with not enough character development. That, combined with the bafflingly fumbled and rushed ending that made me double-check I hadn’t accidentally skipped ahead ten minutes or so means it doesn’t live up to its potential, even while it remains an impressive enough debut for what could be a promising career.


← Pajiba 10 FYC: 'Interview with the Vampire' Star Jacob Anderson | The Delight that is 'Murderville' Returns with Uproarious Holiday Special →