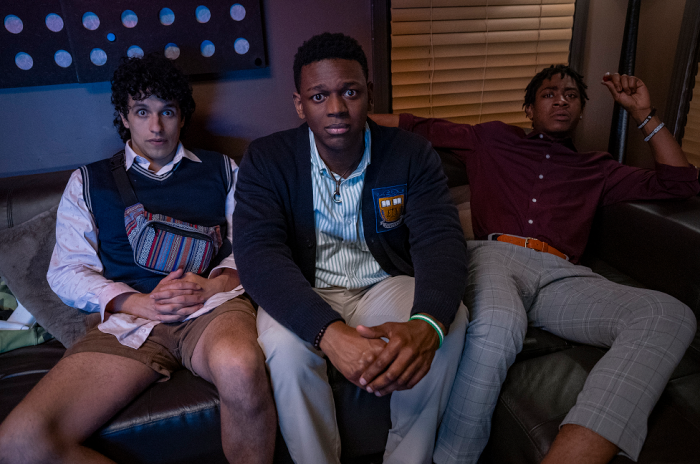 Review: 'Emergency' Is a Funny, Smart, and Poignant Examination of Black Trauma and Friendship

Recently, I wrote a piece praising one of my favorite American films of the modern era: Jeremy Saulnier’s Green Room—a movie that manages to stoke up so much tension in the viewer so as to induce muscle cramps. But it’s not just the tension that makes Saulnier’s masterpiece stand out. As I wrote in the piece, Green Room generates so much power, and soars to the heights that it does, because it manages to combine those nail-biting visceral thrills with a whole lot else: political resonance, moments of quiet melancholy, and a deep love for its characters. Taken together, it adds up to one hell of a knockout punch.

I echo my Green Room love here not because I never tire of talking about that film (though that is also true), but to draw a comparison to another movie that I just watched. Emergency, a comedy-drama-thriller (trust me, all three labels are very much necessary), directed by Carey Williams from a script by KD Dávila, might not quite reach the stratospheric levels of Saulnier’s masterpiece, but for a film that is the feature debut from its writer and only the second feature from its director, the comparison is warranted. When I saw Saulnier’s first film, Blue Ruin, all I could think was: ‘Who the hell is this guy?! Where did he come from? If this isn’t a talent to watch, I don’t know who is.’ When the credits rolled on Emergency, those same thoughts rolled through my head.

Emergency has the kind of concept that you can imagine being casually thrown out by a smug executive eager to cash in on social issues while hewing to a tried and tested, tired, formula: Reaching the end of their tenure in college, two best friends ready themselves to make history by being the first male Black students to hit a night of seven consecutive parties; their plans are thrown into disarray, however, when they discover a white female student passed out on the floor of their house. Fully aware of the social and, well, America context of it all, they naturally hesitate when it comes to calling the police. Eager to help, but also dying to fulfill their once-in-a-lifetime goal, the friends are thrown into a night of chaos that will test their friendship to the limit, as well as putting the social hierarchies of their country under the microscope.

Going into the film, this is essentially everything I knew about it. My advice to the reader who might be inclined to watch Emergency is to do the same. As with most of my reviews, I’ll keep my discussion of the plot to a minimum. Suffice it to say that in every way that that premise could have resulted in cringe-worthy humor and shallow commentary, this film does the opposite. This is an intelligent, sensitive, and funny examination of male friendship and Black trauma in the context of the modern United States of America. Blessedly, its themes are woven deftly into its narrative; this is the opposite of a didactic exercise. Though it examines some heavy themes, this is first and foremost a work of entertainment—and suspense. As it happens, the Green Room comparisons become most apt when trying to chart the levels of tension present here, as for the majority of its runtime, Emergency is a thrill-ride of adrenaline and fear. It will be a while before I forget the feeling that it manifested: A deep, almost paralysing knot in the pit of my stomach that made me twitch and sweat. Like Saulnier’s work, Williams and Dávila’s film derives its power from real world horror. In Green Room, it was neo-Nazis. Here, it is the ever-present threat of lethal police violence that the country’s Black population lives under.

Yet despite Emergency’s thematic weight and searing insight—that final shot is a whopper—the film has no interest in trading in misery p*rn or spoonfeeding you an endless slop of bleakness. Both the script and direction make it apparent that the filmmakers have an admirable command of tone, injecting humor and warmth into exactly the right moments and at precision-engineered amounts in order to keep things dynamic and engaging. There is a gag about halfway through here, featuring a group of older men reacting to the unfurling disaster that is the plot, that is so well done that I wanted to applaud. I couldn’t help but think of a recent and striking counterexample in the Netflix film Spiderhead, which bucked jarringly and incompetently from one tone to another, unsure of itself like a frightened horse on a frozen lake. Aside from a slightly weaker (relatively speaking) few minutes at the start, Emergency, by contrast, remains remarkably assured throughout.

The performers follow suit. Every actor here—even one whose character veers slightly towards the cartoonish—is completely believable. This is exemplified most by the central duo. Actors Donald Elise Watkins (playing bookish Kunle) and RJ Cyler (the more street-savvy Sean) have a lived-in chemistry and a screen friendship that feels as if it exists outside of the parameters of the film. This is a rare achievement in cinema. I was an overall fan of Jerrod Carmichael’s On The Count Of Three, but one of its weaknesses was the relationship between the two friends at its heart; never developed enough to give it the weight it was meant to have, you could feel the joints of the script creaking as a result. Emergency has no such problem. Kunle and Sean’s friendship is multifaceted, rich, and played expertly by Watkins and Cyler. The two characters both go on a hell of a journey over the course of this one fateful night. There are echoes of Superbad here, though as much as I love that film it very much remains a movie cloaked in obvious artifice. The characters talk as if they know they’re playing parts in a film. In Emergency, the dialogue is far more organic, the night’s drama more grounded.

While the cinematography in Emergency isn’t by any means the most notable part of the film, DP Michael Dallatorre does do a good job here, framing things well and contributing to the laughs, suspense, and pathos as needed. Indeed it’s those three words that probably sum up Emergency better than any others. Excellently weaved together in a gripping story in which action leads devastatingly into consequence, this is far above what you’d expect from filmmakers this early into their careers, and it deserves as many eyes on it as it can get. Just do yourself a favor: Don’t watch the trailer first. Go in fresh.