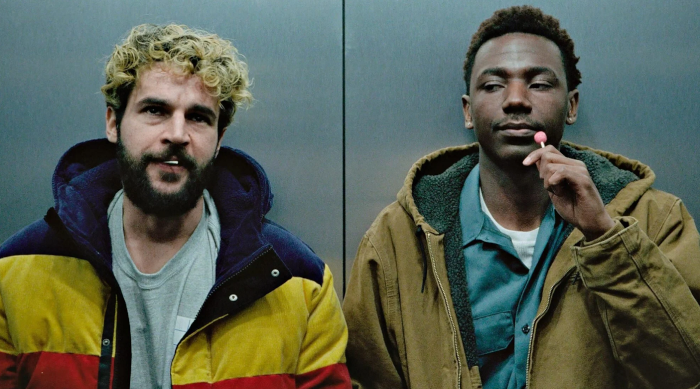 Review: 'On The Count Of Three' Just About Pulls Off the Tonal High-Wire Act It Needs To

I was a little bit apprehensive going into On The Count Of Three—a pitch-black comedy-drama from writers Ari Katcher (Ramy) and Ryan Welch (also Ramy) and first-time director (and co-lead here), comedian Jerrod Carmichael—which at its most basic is a story about two depressed friends who, after both coming to the conclusion that things really cannot get any better, make a pact to kill each other. The film opens with the pair in a strip club parking lot in the cold light of day, each pointing a handgun point-blank at the other’s head. Pretty dark stuff. But the darkness itself is not why I was apprehensive. I love black comedies. Seeing someone mine the darkest depths of human experience for laughs can be a vivifying, electric experience—if it’s done well. It’s those times that it doesn’t work, that’s when things can get real cringe-worthy, real quickly. And it’s not easy to avoid that trap. Black comedies can be some of the hardest things to pull off.

Luckily, On The Count Of Three dances around the cringe chasm with surprising skill, avoiding for the most part the pitfalls that usually come with the subject matter: fourteen-year-old edgelordism, cheap nihilism, and insensitivity to a very real, very serious issue. Suicide is a major public health concern in many parts of the world. In the US, numbers from 2019 show that rates of taking one’s own life have been rising steadily since at least 1999, becoming by then the tenth leading cause of death overall in the country. For people aged between 10 and 34, it was the second leading cause of death. Among those aged between 35 and 44, it was the fourth leading cause. In addition, suicide rates in 2019 among men were roughly 3.7 times higher than among women. It is this latter dramatic statistic that informs On The Count Of Three, which weaves into its narrative fabric other features of the lethally toxic patriarchy that harm those who identify as male as well as those who do not. The men in this story have suffered greatly at the hands of this structural violence, as it manifested itself through individuals in the form of physical, verbal, and sexual abuse. That combined with the hopelessness of the current economic climate has led them to a point of no return, which is where we meet them, in that desolate strip club parking lot, the cold light of day glinting off their handguns.

That sounds like a lot. And it is. Any story that attempts to tackle heavy issues like these has to pass one basic test first: Is its heart in the right place? Does it treat its characters with empathy and the issues at hand with the gravity they deserve? If not, if it’s going for something more twisted, does it pull off the comedic sleight of hand and tonal juggling act well enough to justify its existence? The latter is a very particular high wire act that usually requires a dash of heightened reality and a deft writing hand indeed—and not everyone can be as good as the team behind It’s Always Sunny In Philadelphia. On The Count Of Three doesn’t go for that approach. It is fundamentally a comedy, but it is a relatively grounded one. The laughs don’t come particularly big here; and while there probably could have been more, and better ones, it succeeds more than it fails at mixing in what seems like a genuine concern and love for its characters with the ‘lighter’ moments that provide some dynamic shading to the story.

That story follows one of my favourite narrative templates: Condensed, almost-real time. Whether it’s films that take place over the course of one night, or over a few conversations, I’m a big fan of the emotional zooming-in that such structural devices allow. On The Count Of Three film revolves around the central pair of Val (Jerrod Carmichael) and Kevin (Christopher Abbott), late-twenty-something (or thereabouts) lifelong friends, who decide to have one final day together before ending things once and for all. It’s here that we can see the film’s strongest aspects, as well as its most apparent weaknesses. Carmichael and Abbott do good work and ground the story in humanity, but the script lets them down. While the necessary affection and empathy for them is present, the heavy lifting that the writing should do—to let us really know them as individuals, and to feel the bond between them—never quite materializes. We are repeatedly told that Val and Kevin are the tightest of friends, but only once in a while does that actually come across. Similarly, we are almost always kept at a slight distance, with the glimpses into their interior lives shown here not proving quite enough. The two central characters are supported by a talented cast of guest players over the course of the film’s 1 hour 26 minutes—including Tiffany Haddish, J.B. Smoove, Lavell Crawford, and Henry Winkler, all effortlessly capable—but it’s undeniable that more development would have elevated proceedings.

That feeling extends to the film’s exploration of its themes. While it should be applauded for daring to tackle such heavy issues as it does, it ends up feeling slighter than it should, and—interestingly—longer than it actually is. In addition, there are occasional moments throughout—especially one right near the end, I won’t spoil anything—that seem to contradict its central message, or at least dilute it. Cinematically, too, proceedings are competent, if uninspired. This is not amateur cinematography by any means, but when measured against something like another recent debut, Emmanuel Marre and Julie Lecoustre’s fantastic and visually rich Zero F*cks Given, it can’t help but suffer by comparison. Still, though, On The Count Of Three, is Carmichael’s first film, and despite its shortcomings, it makes me curious to see what the filmmaker will do next.


← Welcome Back to the Party: Franchising True Crime Fallout | Why Are We So Obsessed With The Staircase Murder? →