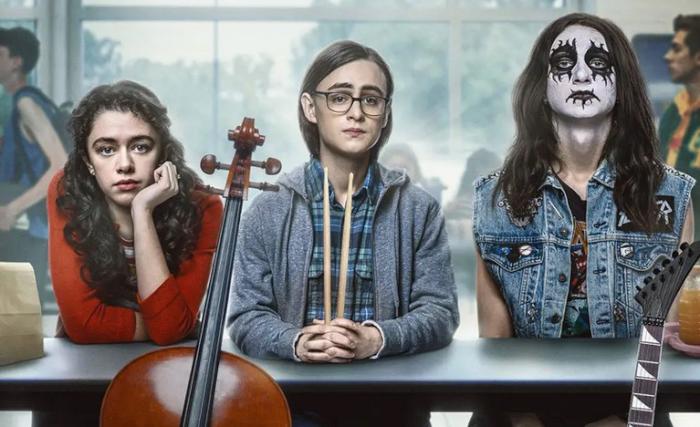 I don’t know how far exactly into Metal Lords’ blissfully brief-yet-still-far-too-long 97 minutes I started bellowing this at my screen in despair, but I can tell you with great certainty that it didn’t take long to happen. This is not a good film, and that is almost immediately apparent. In its holistic filmmaking ineptitude and its cheap, dumb invocation of the musical culture I hold most dear, it is, by some distance, one of the most annoying films I have seen in a long time. With all due respect to the performers onscreen who must be trying their best with the crayon-covered rag disguised as a script handed to them apparently a day or two before cameras rolled—especially Brett Gelman and Joe Manganiello who do manage to squeeze out a few almost-laughs out of it all—and to the behind-the-scenes crew who I’m sure worked as hard on this as any other project, I can’t hold back the truth: Metal Lords is garbage. I feel personally aggrieved that this movie just robbed me of 97 precious minutes of my brief time on this Earth.

Well, let’s say 96 minutes. There are maybe three or so laughs spread throughout, so that’s something I guess.

Metal Lords comes to us courtesy of two entities, the presence of either one of which—we should know by now—serves as a bright red flag when it comes to quality. The film’s trailer even tries to warn us by flashing them up in huge letters. ‘Don’t watch this film!’ it screams at us, by first saying: ‘FROM THE PRODUCERS OF GAME OF THRONES’, and then following it up with: ‘A NETFLIX FILM’. I’m getting fu**ing sick of saying this, and I’m somehow starting to resent the company even more than I already did, just for making me have to say it so much, but in response to someone asking me whether Metal Lords is any good, at this point I feel like I could almost bypass this whole review writing process and simply shrug and say: ‘Netflix film, innit?’ The average quality level of original Netflix feature films would be enough to tell the story here, but if then into that crap-cake batter mix you add the fu*kery of either one of those doofuses responsible for one of the most impressive torpedoings of a narrative’s quality of all time—then, well, as Carl Weathers would say: Baby, you’ve got a stew going. A bad, stupid stew.

The narrative here, such as it is, follows an intensely familiar template. Two misfit kids overcome inner turmoil and teenage tribulations while proving themselves in some external competition and/or event. Maybe there’s some light romance involved. In Metal Lords, this is our protagonist, timid nerd Kevin (Jaeden Martell)—who provides occasional, jarring narration throughout—and Hunter (Adrian Greensmith), a long-haired metalhead who waxes poetic about the ‘true meaning’ of metal and who uses music to take out his frustrations over the materially bountiful but emotionally barren landscape that is his home life. The external event is a school battle of the bands, the winning of which is a dream of Hunter’s. Kevin, directionless, gets swept up in Hunter’s passion and switches from playing one (1) drum in marching band to bashing out the entirety of Bill Ward’s absolutely insane drum track in Sabbath’s timeless ‘War Pigs’ in what looks like a few weeks’ time. British actress Isis Hainsworth completes the equation as Emily, a cellist with an ill-defined condition that causes her to lose her temper and liberally—and, script-wise, extremely self-consciously—deploy that most lovely (on my side of the pond, anyway) of profanities: ‘C*nt.’ Will the two boys overcome the interpersonal drama that will undoubtedly develop between them as a result of their circumstances and Kevin’s blossoming romance with Emily? Will they be able to accept Emily filling in for the role of bassist and ride their collective power into first place in battle of the bands? Etc. Etc. Etc.

Now, the thing is, there’s nothing in and of itself wrong with template films. Not everything has to be Titane. Formula movies, when done right, can be by their very nature immensely satisfying. What’s more, the wriggle room afforded by the gaps in the template can be filled with wonderful creativity. When it comes to teen comedies doing this right, I think of things like Superbad, Booksmart, or The Edge of Seventeen—to name just a few recent titles that have played with the expected themes, rhythms, and beats of the genre to say something both emotionally true, and funny. It might be because I don’t watch that many of these films, and I only really catch the best ones, but I now realise I may have fallen into the trap of thinking: This must be a very easy type of movie to make. This has to be a formula that is very hard to fu*k up.

Well, cheers, Metal Lords, I guess, for proving me so wrong. Not only is there zero innovation in the template gaps here—the only thing, perhaps, being the fact that all of this is centred around heavy metal—but the fundamentals are all absent too. The film wants to make you laugh and to feel for these kids, their connection, and their struggle. It doesn’t succeed in any of these goals. Nobody here feels or talks like a real person. The interpersonal drama is artifical and weightless. As a result, I had zero emotional investment in the characters, or the plot—which itself wasn’t imbued with any tension or stakes, and the lack of jeopardy throughout was oftentimes the most comical part of what was onscreen. Events follow on from one another because they must, not because of any logical reason, and there are numerous plot beats and developments that happen with no set up whatsoever. At one point near the end, Emily uses her connection with the school janitor to aid her and the guys at a crucial moment. In a normal script, this connection would have been established early on, providing a foundation to a climactic plot mechanic, as well as revealing more about the characters involved. Unless I fell asleep for a few seconds in the early stages of the film—which to be honest is perfectly plausible—this interaction between Emily and the janitor at the end of the story is the first and only one we see. I’m perfectly happy to hold my hands up and say I might have missed something here, but the movie is full of moments like these. Unfortunately it isn’t just the script that struggles to keep the concept of a feature film afloat here, either. The editing is confusingly bad; the direction likewise. The shot selection and framing choice seems nigh-on random or painfully amateurish—I’m sure I could have filmed this myself.

I think my annoyance with Metal Lords might have been tempered somewhat if the subject matter wasn’t what it was. If this was just another bad American teen comedy, then I’d have been able to shrug it off easier. If it was just my ire as a film lover that was raised, that’d be one thing. It’s the fact that D.B. Weiss had to drag metal into all of this that really gets to me. The older I get, and the more ingrained a sense I develop of the sorry state the world is in, and the stresses of life pile on ever heavier on me, the more deeply I find myself loving the things that bring me joy. Heavy metal is one of those things. I love metal with my whole being. It’s been there for me through thick and thin, and has got me through some of the darkest days of my life. When a film comes out that pays tribute to this passion, I can’t help but get excited. When it does it well—like the flawless School Of Rock or the well done 2018 Finnish comedy Heavy Trip for example—it brings me immense joy. To see someone express their love for the same thing that you love, and to see them do it in a heartfelt, hilarious, sincere way, is a powerful experience. It’s true that D.B. Weiss is by most accounts a metalhead—remember that time he joined in with Ramin Djawadi and a ridiculous roster of all-time guitarists in playing the Game Of Thrones theme on guitar? But the way he’s decided to express that love here makes me wish he burned his copies of ‘Powerslave’ and ‘Among the Living’ and ‘Screaming For Vengeance’.

Tenacious D famously sang that, ‘You can’t kill the metal. The metal will live on,’ and that, ‘No one can destroy the metal. The metal will strike you down with a vicious blow.’ After watching Metal Lords it does feel like D.B. Weiss and the what-must-surely-be-a-money-laundering-front that is Netflix’s film department have tried their best to prove Tenacious D wrong.

Though I will say that, yes, sure, I too would love it if in times of personal crisis Rob Halford himself would manifest before me to dispense wise advice. That is an image that I do thank Metal Lords for.