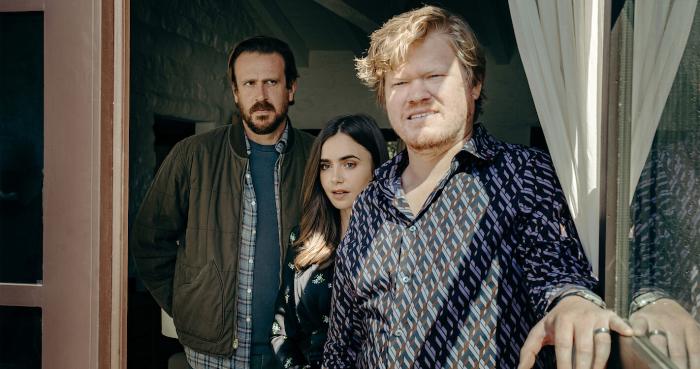 'Windfall' Review: All the Ingredients Of a Good Time, Largely Squandered

Jason Segel. Jesse Plemons. An isolated location. Overtones of anticapitalism. An atmospheric and ominous soundtrack hinting at dark things glimpsed in the margins. These are all good things! Or at least things that for me personally mean a base level of intrigue and interest in a film that includes them. Windfall, the latest from writer-director Charlie McDowell (The One I Love, The Discovery), has all of these elements, yet fails to deliver on all the potential that they can signify, serving up instead a damp squib of a light (oh so light) Hitchcock imitation devoid of stakes or emotional investment.

Windfall is a Netflix film. And the thing about Netflix films-barring the occasional flash of aberrant brilliance like The Hand of God or Roma is that they are mostly pretty rubbish. Cheap-looking, shallow, uninteresting — these are usually the kind of descriptors that come to mind when watching something like, say, I dunno, The Old Guard (which also has the added bonus of just oozing imperialist propaganda). I wasn’t as enamored of The One I Love as a lot of critics, but as a dramatic piece, it largely delivered. It was a well-crafted little movie that felt like a personal statement and worked as an intriguing examination of love and marriage. Windfall, by contrast, struck me as a film delivered to a deadline, by a filmmaker injecting just enough craft to let you know that he could have made good on the promise of things if he really wanted to, but that he probably knew that Netflix wouldn’t care and he’d get paid either way so why not cut things as they are and go grab a pint down the pub?

The plot summary here is emblematic of the disappointment that sums up the viewing experience overall: It sounds great on paper but does not live up to it in reality. Briefly speaking, Windfall is a chamber piece involving only one location and four players. A wealthy couple—played by Jesse Plemons and Lily Collins—arrive at their fancy country house only to find it is in the process of being robbed by a stranger (Jason Segel). That’s all there is to it! A simple premise, but one rich with possibility—not just for the potential of narrative twists and turns, but for the exploration of character and relationships that could follow as a result of the inciting incident. Think of Ruben Östlund’s excellent Force Majeure, and the way the avalanche at the film’s outset dynamites the foundations of the central couple’s marriage, as well as raising up for examination modern masculinity. Sadly, Windfall is no Force Majeure. There is no real insight gained here into anything. The experience of watching the film is pleasant enough, but if you are expecting either that insight or at least some compelling or exciting storytelling, you will walk away deflated.

That’s not to hate on things disproportionately. There are elements in Windfall that do work. Many of the pieces are present. They just haven’t been assembled properly. There are even some pleasant surprises—chief among them, for me anyway, Lily Collins, who acquits herself well enough with probably the most interesting role in the movie and who up until today I’d just dismissed as yet another striking example of industry nepotism (she is still that, but this is the first time I’m seeing some level of skill from her). Jason Segel is one of my favourite contemporary screen presences—not necessarily for his acting ability, though he has plenty of that, but for the ineffable energy and personality that he exudes whenever I see him in anything. Casting him here in this role, his hulking frame at odds with the uncertainty in his eyes and trepidation in his movements, was an inspired idea.

If only that idea was tied to a better script. As it is, Windfall’s is populated by slight and insubstantial characters who only occasionally seem to exhibit many signs of an inner life or of experiences outside of the film they find themselves in. Instead, they feel like pawns on a chessboard—which would be fine if their moves were exciting or interesting. The house they find themselves in feels undeveloped too. In a location-specific film like this there is so much potential to use the place for exploration and re-contextualization and character development—something like Soderbergh’s middling-but-locationally-inspired Kimi comes to mind—but Windfall never seems interested in going there. It doesn’t go very much anywhere. It’s a shame, as at its outset it threatens to, but it never does.

← Please Just Look At This Cat Cutting Onions Would You | Why Isn't There an Oscar for Best Stunt Work? →