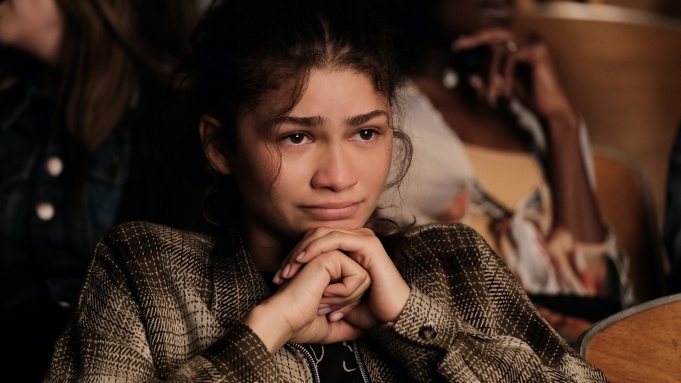 There was a single resounding success in this week’s Euphoria finale: Zendaya’s Rue had an emotionally satisfying conclusion to the season, even if her story crowded out almost everyone else’s. Granted, Maude Apatow’s Lexi — something of a background character for much of season one — also received some nice resolution, but mostly by virtue of her association with Rue, who rekindled a close friendship with her that we knew about but had rarely witnessed over two seasons.

Lexi’s play, which might have irreparably damaged her relationship with her sister Cassie, nevertheless gave Rue the perspective she needed to stop seeing herself as the villain of her own story. For Lexi to see and validate Rue’s trauma over the death of her father allowed Rue to see herself from the perspective of someone else as a deeply damaged but ultimately good person. It gave Rue the moment of catharsis she so desperately needed to maintain her sobriety (at least through the remainder of her junior year), and the hug between Lexi and Rue in her bedroom provided a sweet emotional closing to Lexi’s play and the season.

I’m happy for Rue, and Zendaya is the biggest star on the show and its central character, so it made sense to center the finale on her. But did it have to do so at the exclusion of almost everyone else?

— I’ll grant that Fezco’s ending landed appropriately for a cliffhanger-like finale. As we anticipated, Ashtray died when the SWAT Team raided Fezco’s house after Ashtray also stabbed Custer in the neck, not that Fezco — playing big brother — didn’t try to prevent it. Fezco wanted to take the rap for Custer’s murder and send Ashtray running, but Ashtray collected an arsenal of guns and hunkered down in a bathtub to take on the cops. He was killed, but not before Fezco was shot and a police officer was killed. I suspect they’ll find a way for Angus Cloud to return next season, but it would take one hell of a lawyer to allow him to escape felony-murder charges, even if he didn’t pull the trigger. Faye’s account of the event can only do so much.

I do wonder about the circuitous, scattershot nature of Fezco’s storyline. He and Lexi formed a mutual crush, but he also beat the hell out of Nate (of which there were was little follow-through, save for a visit by Cal Jacobs), while the Custer storyline felt tacked on. It worked because of our emotional investment in Fezco, but from a storyline standpoint, it was all over the map. Last season, he’s Rue’s caring, deeply sympathetic drug dealer, and this season ends with Fezco missing his would-be girlfriend’s high school play because of a raid and a massive shoot-out that resulted in the bloody death of a 14-year-old. It’s half screenwriting bingo and half emotional manipulation.

— So much of this season has been focused on Cassie, only to see her storyline culminate with a crazed blowout in the middle of Lexi’s play and a fistfight with Maddy, which fizzled out into a low-key exchange between Cassie and Maddy in the bathroom that might have represented a truce and closed the book on their rivalry: “Nate broke up with me before I even went up on that stage,” Cassie said tearfully. “Don’t worry. This is just the beginning,” Maddy told her sympathetically.

— What are we supposed to feel about Nate now that he’s turned his father over to the police? Again, Nate and Cal played a central role in the first half of the season, but the season ended with Nate pulling a gun on his father. Did he kill him? No. He just kept Cal in place until the cops could come and Nate could hand over the flash drive with all the evidence the authorities needed to presumably put Cal away for good.

I know that in certain situations, understanding the circumstances behind a person’s malevolent acts can buy them some sympathy (Rue, for instance), but there’s nothing that will ever redeem Nate, and I can’t imagine anyone — let alone Jacob Elordi — wanting to go through another season of this. The best thing that could happen to Euphoria — and Elordi — is for Nate to go to college. Meanwhile, after Cal’s epiphany and penis-dangling meltdown, I thought we’d see something more from his character other than a brief moment of self-awareness before being hauled off to prison.

— Actually, Cassie, Maddy, and Nate are all supposedly seniors, and since this season ends with Rue’s junior year, shouldn’t they all be going to college now?

— If so, that should at least buy Kat, a junior, some more screentime next season. She was reduced to a couple of scowls and pursed looks in the finale, following a season in which her character had maybe 15 minutes of total screentime. A total shitshow. At least Ethan had a few highlights in Lexi’s play as Lexi and Cassie’s … mom.

— Rue forgave Elliot for pairing off with Jules, and Elliot apparently punished her with an unfinished four-minute song, four minutes that could have been devoted to literally anything else.

Elliot singing for hours when my boy Ethan got 5 seconds #EuphoriaHBOMax #Euphoria pic.twitter.com/xq93uOsF85

— And then there was Jules, another character who learned what it means to be defined by her association with Rue. When Jules and Rue were an item, Jules got as much screentime as Rue. Now that Jules is an afterthought to Rue — someone she cannot divorce from her drug addiction — Jules is also an afterthought to Euphoria, relegated to glancing looks at Rue, reaction shots to Lexi’s play, and a kiss on the forehead. All due respect to Lexi, but Rue should have devoted the time she spent in Lexi’s room apologizing to Jules. What a disappointment.

— Also, what happened to Laurie? She’s just going to forgive Rue’s debt because she got sober? And Colman Domingo’s Ali, who made dinner for Rue and her family and then got lost in the shuffle of the play? I liked the play. The play was a good plot device. It did not, however, need to dominate the final two episodes, not when Sam Levinson had otherwise left so many loose ends dangling.

Good for Rue, but Justice for Everyone Else Hashtag.


← Review: Escape the Worst Timeline For a Few Hours with the Fluffy Delights of 'Marry Me' | 13 Celebs You Might Genuinely Be Surprised to Learn are Newly Eligible for AARP Memberships →