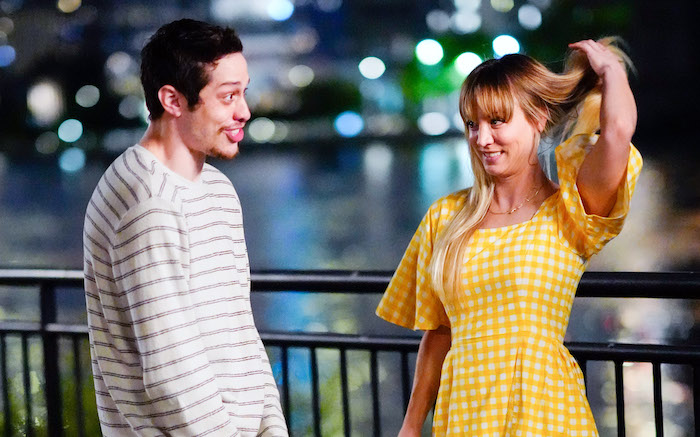 In Meet Cute, Sheila (Kaley Cuoco) spots Gary (Pete Davidson) across the bar and awkwardly asks if she can buy him a drink. They hit it off immediately, go out to dinner, and take a walk through the city. Sheila completes a few of Gary’s sentences and occasionally “jokes” that she’s a time traveler. The “first” date covers about 40 minutes of the film before Sheila reveals to Gary that it’s not actually their first date.

They’ve been going on the same date every night for a week, she tells him, before admitting that they’ll go on the first date again tomorrow, at which point Gary — for obvious reasons — calls it a night. Sheila is unbothered because — no matter how badly the night ends — she knows she can start all over again the next day.

Using a tanning-bed time travel machine that only goes back 24 hours, which she found in a nail salon, Sheila returns to the same bar to go on the same date with the same Gary again. And again. And again. It’s like Groundhog Day, only for Sheila, it’s voluntary. Sheila entered into her first first date depressed, and given how wonderful that night is, she’s reluctant to move on to the next day, to resume her life, because she doesn’t see anything in her life worth resuming.

There are a few rubs, Sheila realizes, as she experiences the same night on repeat for the next year. After 12 months, it feels as though she’s going through the motions, and it’s difficult to recapture the magic of those first few first dates. In her malaise, she and Gary sometimes fight. Sometimes, she gets annoyed with Gary because he makes the same jokes every night. Gary, meanwhile, doesn’t remember one day from the next, but does begin experiencing feelings of deja vu. When Sheila approaches Gary at the bar for the 365th consecutive day, Gary feels a flutter of excitement, but also a weird sense of sadness. When Sheila confesses again, at the end of the night, that she’s a time traveler and that she and Gary have been going on the same date for a year, Gary begs her to stop, begs her to move on with her life so that he, too, can stop reliving the same day.

What exactly is Meet Cute trying to say? Relationships are hard? That even a perfect first day is no guarantee that a relationship will not have its difficulties? That the “mess” is what gives a relationship its character. That we can’t cling to the past, we must forge on? That Pete Davidson is incapable of playing any other character besides “Pete Davidson”? That the Groundhog Day premise has its limits? All of the above?

Kaley Cuoco is absolutely fantastic in Meet Cute, vacillating through a range of emotions — giddy, depressed, bored, smitten, and jaded — and if anyone could carry a premise as thin as this, it’d be Cuoco. But even she has her limitations, and there are only so many times the audience can go through slight variations on the same first date before it wears on our patience. I’m willing to give Davidson a pass here because there’s only so much he can do with a character obliviously reliving the same day over and over. At least Gary doesn’t remember one date to the next; the audience is not so lucky.

Meet Cute has a vaguely interesting twist on the time-loop premise. It is not aspirational. Sheila is not trying to figure out the key to unlocking the mystery of the time loop and moving on to the next day. There’s nothing to perfect. Sheila is not trapped. She can stop traveling back a day anytime she wants, but she’s determined to rekindle the same magic of their first date. It’s all she thinks she has left. The key for Sheila is finding a reason to want to move on with her life, which doesn’t allow much room for dramatic tension. The film is only 80 minutes from the moment it starts until the credits roll, but it feels longer. There’s no B-plot. There are no other major characters. It’s the same date between the same two people in the same locations. It’s a sitcom episode stretched beyond its breaking point. For all the charm that Cuoco exudes, the monotony of Meet Cute saps it dry. Palm Springs did the romcom time loop first, and it did it much better.