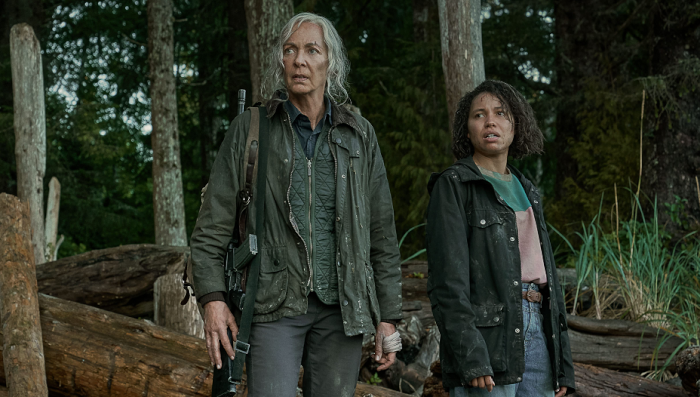 Netflix’s ‘Lou’ Asks the Question: ‘How Can We Make Watching Alison Janney a Disappointment?'

You know the drill by now. The gruff, taciturn hero, whose identity was previously mostly confined to Being A Bit Old and sometimes Sticking To Themselves, does something badass out of the blue. Maybe they kill a rampaging beast threatening a family. Or they beat up and incapacitate a gang of feral youth hassling a bus full of passengers—or perhaps the same thing but in a convenience store. Or there’s always the classic: They turn the tables on some cocky military guys, whose hubris blinds them to the fact that they are facing an enemy more formidable than they ever imagined. Then, inevitably, another character will react to the wildly shocking new information about their friend/relative/acquaintance with a disbelieving, perhaps horrified, stare, which gradually transforms itself into an incredulous utterance. That usually takes the form of something like: ‘Where the hell did you learn to do that?!’ Or: ‘Who… Who are you?!’ Or indeed: ‘So when exactly were you gonna tell me that you were in the military?’ More often than not, the letters ‘C’, ‘I’, and ‘A’ will enter into the equation.

Write all those tropes down on pieces of paper and pop them into a hat, give it a good old shake, pull out a few, and bam—you too can have a film! Netflix’s Lou seems to have followed this school of story writing, featuring as it does the always wonderful Alison Janney in the central role of hidden badass (although how anyone on her small isolated island community could look at her and not immediately assume she’s someone who could take down armed Special Forces goons if she so chose to is beyond me) involved in a tale comprised of shady military backgrounds, chickens coming home to roost, and particular sets of skills suddenly being of great use. Essays could be—and have been—written about the way America whitewashes its immeasurably blood-soaked role in the world, laundering its reputation through fiction and using its entertainment-industrial complex to forge a neural pathway in the popular imagination that, through repetition, finds it easy to link the heinous crimes of empire with the potential for individual redemption or heroism. ‘They did something truly awful once, but they are really sorry, and they’ll prove that by using their power for good now!’—that kinda thing. Lou doesn’t go quite that far or lean that crass, and it almost feels like it’s maybe trying to say something interesting with its themes, but it never really gets there. As to whether it tries to grapple at all with how those aforementioned past crimes may have affected people in countries other than the U.S.—those countries actually on the receiving end of America’s war machine—well, don’t worry about it.

Mind you, essays could also be written about Alison Janney. And they should be, because what a presence this woman is, and has been, for decades. A commanding screen presence capable of withering sarcasm and great warmth, here she gets to flex her action movie muscles in a late (very much relative term)-career genre turn that must naturally be compared to the phenomenon that was Liam Neeson’s Taken. Where that film was boldly schlocky, however, Lou tries to take a more grounded and earthy path. I really don’t like saying too much in my reviews as I think the less you know about the actual events depicted in the film the more fun it is to watch, but suffice it to say that where something like Taken really focused on the ass-kicking that its protagonist doled out, here we have that take a back seat to the drama that first-time feature screenwriters Maggie Cohn and Jack Stanley have attempted to hang the story on. It’s a shame, then, that that’s probably Lou’s weakest part, with a promising start featuring effective character introductions and raising of dramatic stakes becoming all too quickly peppered with hackneyed and awkward, clunky dialogue—as well as a general sense that the writers really weren’t that sure of themselves when putting the whole together, or maybe that they had a deadline to hit and had to tie things off before they found the best version of the story they were trying to tell. Janney’s co-stars—including Jurnee Smollett and Logan Marshall-Green—marshall their skills to do what they can, but there’s just no way to sell some of the material here.

It’s a shame, because there are parts of Lou that definitely raise it above the level of ‘typical Netflix film’. Chief among them is the photography, which luxuriates in the dense forest and craggy coastlines that make up the film’s island location. Director Anna Foerster and her cinematographer Michael McDonough make good use of the natural features available to them, and—again unlike so many Netflix films—actually seem interested in, or indeed capable of, utilising things like perspective, color, depth, and framing in order to not just tell a story clearly, but to try transport you somewhere else entirely. It makes sense once you remember that Michael McDonough was in charge of photography on the excellent Leave No Trace and the fantastic Winter’s Bone. Lou also features two things that, for me personally anyway, pretty much always improve a film: 1) A storm as a narrative device, and 2) Bon Jovi on the soundtrack. That, and weaponry improvised from banal household objects. Jason Bourne really hammered home how fun that could be, and maybe it’s just me, but I feel like I haven’t seen that device deployed much since Matt Damon’s befuddled spy last bashed someone’s clavicle in with a rolled up magazine on our screens.

Ultimately this is a film very much made up of moments. There are moments of exciting action, moments of effective tension, moments of emotional investment. Overall it is decently shot. It all adds up to a project that feels like an actual film that had some thought and craft put into, rather than something you might catch while jetlagged in a hotel room at 3am, its flat, random compositions and ridiculous scripts leaving you unsure whether what you are seeing is actually real or merely a figment of your sleep-deprived imagination—which is the effect that so many of Netflix’s original productions have on me. So that’s worthy of praise by itself. I just wish I’d had as good a time as the idea of ‘Alison Janney’ kicking ass promises.