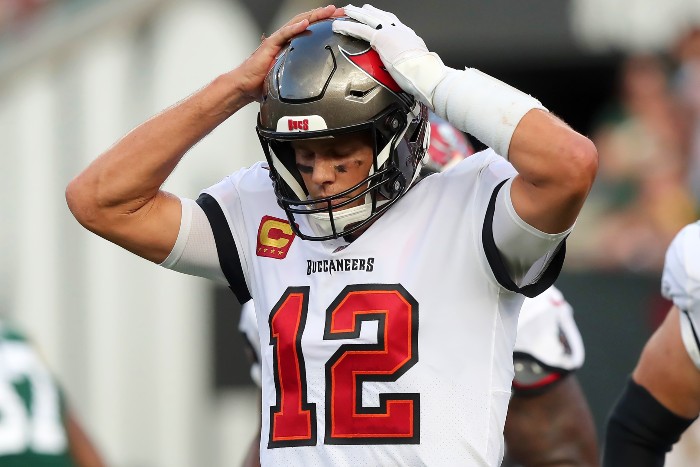 Tom Brady was supposed to be retired. Instead, he came back for another season with the Tampa Bay Buccaneers, presumably to end his career on a Super Bowl win. However, instead of all that, the big story is whether his decision to come back cost him his marriage to Gisele Bündchen. All signs are pointing to YUP. She notably did not attend his first home game on Sunday, but she did send the kids, which is a peak “you f*cked up now” move. (People)

Sarah has some thoughts and some insider info on the Don’t Worry Darling drama that shows no signs of slowing down. (Lainey Gossip)

King Charles is sweating the new season of The Crown. (Celebitchy)

While filming Congo, I sat on top of a Volcano talking to Tim Curry about that movie. He said one of the coolest things was that it saved a number of small indie theaters from going under, because they knew that two nights a week Rocky was going to do big business. https://t.co/dvtd6sYm4G

For the record, Kelly Ripa did not almost die while having sex with Mark Consuelos one time. Evidently that was a thing. Beats me! (EW)

From Ciara: Apparently thistle atrocious “Sweet Caroline” remix is making the rounds on TikTok. My roommate just introduced me and I cracked up so bad there were tears, just wait for the drop. (YouTube)

A rare encounter with a giant phantom jellyfish 990m (3,200 ft) beneath the surface in Monterey Bay.pic.twitter.com/gqkD52QfGH

Roger Stone was reportedly caught on camera before the 2020 election saying, “F*ck the voting. Let’s get right to the violence.” (Mediaite)

Have you read any of The Locked Tomb series? LittlePlat has so many feelings about Tamsyn Muir’s surprise addition, Nona the Ninth. The spoilers are hidden, so it’s safe to check out if you’re not caught up. (Cannonball Read 14)

Superman Is Doing what pic.twitter.com/HvgicJpjEg