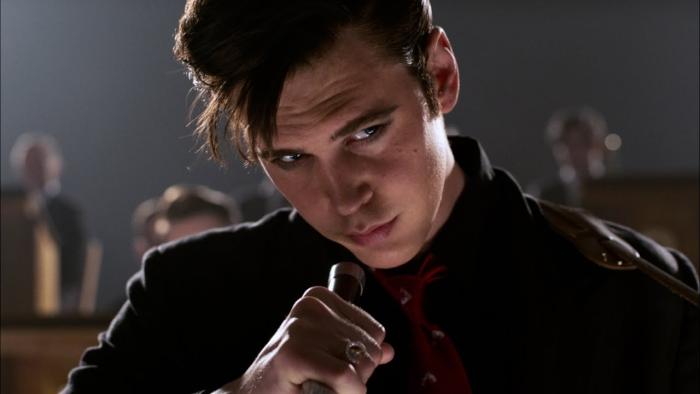 I can’t say I was particularly excited about Elvis upon its release because who needs another by-the-numbers, estate-approved musical biopic, right? But after Kayleigh’s solid review, a lot of positive word-of-mouth, and a lack of other options in the theater, I gave it a shot earlier this week. Ultimately, I agree with Kayleigh’s review — it glosses over a lot of Elvis’ problematic issues (appropriation, dating a 14-year-old), but it’s otherwise a crowd-pleasing and entertaining film, and Austin Butler turns in a remarkable performance.

That said, the film had the weird effect of unlocking a lot of early childhood memories for me. I’d forgotten how mythic Elvis was back then before the gaudy, Vegas Elvis caricatures began to define the brand. I grew up two hours from Graceland, and Elvis was sort of woven into the fabric of our culture — the first Bill Clinton campaign, recall, was defined in part by the cultural kinship between Elvis — who “introduced” Black culture to the segregated South — and Clinton, inexplicably often referred to at the time as the nation’s “first Black President.” Yikes.

I have a lot of jumbled early memories of Elvis, and I don’t know the source of most of them — news coverage, TV movies, a visit to Graceland, tales told by parents, grandparents, and other friends and relatives. Graceland Elvis (not Vegas Elvis) had a certain omnipresence in my early life, and his close relationship with his family was revered in Southern circles. I also remember stories about “The Colonel,” although until this movie was released, I had no idea his name was Tom Parker.

My grandmothers’ birthdays, I also recall, were defined by their relationship to Elvis’s: One grandmother had been born the same year (1935) and the other on the same day (January 8th). It’s the latter grandmother — whom we called MeMaw — that spoke most often of Elvis, although not of his music but of his family. MeMaw had been a lifelong alcoholic who had delivered several stillborn babies (My mother told me it was 10 or 12, although I don’t know that I believe it could’ve been that many). MeMaw only quit drinking — for a few years, anyway — when my mother refused to let her see her grandchildren until she sobered up; another oft-told story in my family.

MeMaw, who rarely wore her dentures, dipped snuff, and always spit into a Dixie cup before asking me for a kiss, spoke often of those stillborn babies, an odd topic of conversation given my age at the time. She lived in a trailer home layered in newspapers, which would collect the droppings of her two parakeets, who had the run of the place. But when she spoke of those babies, she never failed to also mention the most famous of all stillborn babies, Jesse Garon Presley, the stillborn twin brother of Elvis, delivered 35 minutes before Elvis and buried, subsequently, in a shoebox (a disquieting cenotaph of Jesse now exists in Graceland). I’m not sure why she connected the two, but I suppose it was to give meaning to all the babies she lost by associating them with the most famous rock n’ roll musician of all time.

I don’t know if everyone else grew up in families where stillborn babies and the dead twin brother of Elvis Presley were a frequent topic of conversation, but I’ll tell you this much: It haunted me. I thought about those babies, Jesse Presley, and that shoebox all the time, and like a lot of things when you grow up in a deeply religious state, those thoughts often mingled with stories about Jesus and the Bible. When you’re too young to fully understand the crucifixion story, but you’re often confronted with images from it, these half-formed stories start to bleed into one another: MeMaw’s dead children, Elvis dying on the toilet, the ambulance speeding away from Graceland, his twin brother in a shoebox, and Jesus wearing that crown of thorns while nailed to a cross.

It’s a goddamn miracle our young and resilient brains are capable of holding all of these thoughts at once and still wake up and go to first-grade classrooms and draw pictures with glue that we spill glitter onto. I hadn’t thought about any of these things in years — in decades — but I suppose that’s the power of Baz Lurhman’s Elvis. The movie brought it all back, and in Helen Thomson — who played Elvis’ mother — all I could see was my poor MeMaw processing years of grief while sitting in that trailer, snuff-filled Dixie Cup resting on the arm of her chair, as those birds flew past the illuminated screen of her television.

Elvis is now in theaters.


← 'Don't Look Up' Was a Bad Film, But... | Peacock's 'Killing It' Deftly Tackles Capitalism, the American Dream, and Burmese Pythons →