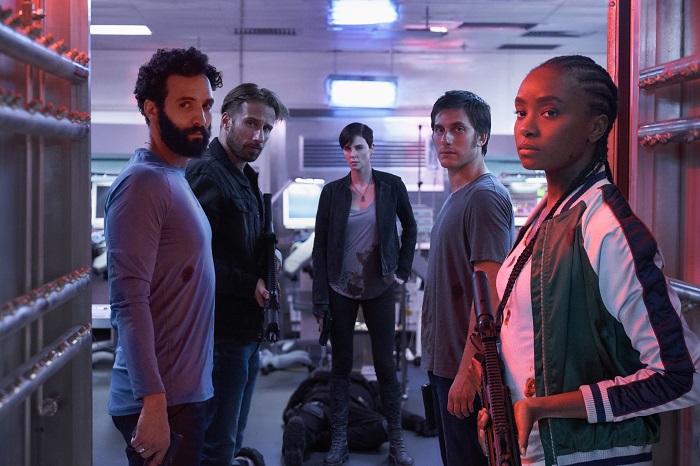 With ‘The Old Guard’ Hitting Netflix in July, Do You See a Trend in the Streaming Service’s Action Originals? A Very Militaristic Trend?

The trailer for Gina Prince-Bythewood’s The Old Guard hit the Internet last week, and Dustin declared it “exactly our shit.” Which I don’t necessarily disagree with! This is certainly a highlight in Netflix’s summer schedule, hitting the streamer in July!

This cast is stacked: Charlize Theron (reminder: you should rewatch Mad Max: Fury Road every second of every day!); KiKi Layne (who is doing a total 180 from If Beale Street Could Talk); Marwan Kenzari (Hot Jafar as a good guy!); Matthias Schoenaerts (I am fanning myself as I type); Luca Marinelli (HELLO!); and Chiwetel Ejiofor (whose directorial effort The Boy Who Harnessed the Wind is also on Netflix right now, and you should watch it). And Prince-Bythewood is taking a real swerve here from her preceding films, which were mostly emotionally nuanced, straightforward dramas: Beyond the Lights, The Secret Life of Bees, Love & Basketball. A hard-hitting action film, adapted from a comic book, with fight choreography from stunt coordinators who worked on the Avengers films, the Fast and Furious franchise, and John Wick? Okay!

But does anything about The Old Guard seem, well, familiar to you? And by that I mean: Another movie about principled soldiers fighting to protect the innocent? I’m not necessarily criticizing violence itself here; I know what the action genre is. My particular issue, though, is that The Old Guard fits a very recognizable pattern for Netflix original movies, which is that so many of their action offerings read like tacit—and honestly, sometimes quite overt!—approvals of U.S.-led military action.

Remember that all art is political, and in producing these projects under their in-house banner, Netflix is sending a specific message about what it thinks its viewers want. And, uh, what viewers want is low-key propaganda, I guess? To wit:

White guy, a military-trained black ops sort of dude, saving a brown kid in a yellow-filtered third-world nightmare in Extraction:

White guy, who alludes cheekily to being CIA-trained and also happens to be a billionaire, saving brown kids in a yellow-filtered third-world nightmare in 6 Underground:

White woman, a military-trained bodyguard, saving another white woman in a brown-filtered third-world nightmare in Close:

These movies all have the same broad strokes in their very obvious “military training makes you better and stronger and more principled” messaging, and yes, they do reflect a larger conversation we should be having about the action genre. Didn’t Hobbes and Shaw feel like a betrayal of the Fast and Furious genre when it veered away from being about cars to focus instead on a super-secret government mission in which a family of soldiers faced off against another bad guy super-soldier? The franchise chose to redeem the Shaw family by retconning them in service of their country, and it further diminished the outlaw energy that the Fast and Furious movies initially thrived on before U.S. operatives in the form of Dwayne Johnson’s Hobbs and Kurt Russell’s Mr. Nobody became allies to Vin Diesel’s “family.” And of course, the elephant in the room is the Marvel Cinematic Universe, which has received various funding, support, and partnership from the U.S. Department of Defense, the U.S. military, and the Pentagon. Think back on how the marketing of Captain Marvel was built around a rah-rah, girl-power energy for women in the military.

Look, I get it. This is pat, tidy storytelling about heroic people doing heroic things. But man, aren’t you also getting increasingly bored by this? “Well, Roxana, why don’t you watch something else from Netflix?” you might ask. Like what? The movies that really shake things up by deviating away from how the great the military is to … how great cops are?

Or the millionth iteration of Mark Wahlberg as a Boston tough, in Spenser Confidential?

Or In the Shadow of the Moon, which somehow wasted both an intriguing time travel concept AND Bokeem Woodbine?

All I’m asking for is: Shake it up, dammit! Conceive of a world in which there are other heroes besides the police and the military! (The aforementioned John Wick is a perfect example of this. He kills about a bajillion people, sure, but the universe of those films operates entirely outside of our warmongering reality, and therefore does not implicitly support the military endeavors or interventionism of action films like Extraction.) Or, if you’re going to tell that story, subvert it. Go the Triple Frontier route—before the movie let its protagonists off the hook, they were more interesting for doing villainous shit with clearly selfish motivations. I actually liked a solid amount of that movie! And remember, it had so many of our husbands! And also Ben Affleck!

Or what about Hold the Dark? Everyone loves to talk about Jeremy Saulnier’s Green Room because it was legitimately the fucking shit, but Saulnier and Macon Blair’s Hold the Dark is unnerving and strange and gory as hell. It depicts the U.S. invasion of Iraq after Sept. 11, 2001, as senseless and brutal, and makes clear that the film’s protagonist learns how to kill thanks to his military service—there’s no romanticism or sentimentality here regarding what that experience is like. It’s bleak! I think about it often!

But Triple Frontier and Hold the Dark are clear outliers. Who knows how much we can really trust Netflix’s self-reported viewership numbers, but you might recall that the streaming service claimed Extraction was on track to be its most-viewed film ever.

EXTRACTION is well on its way to becoming the biggest-ever film premiere on Netflix — with a projected 90 million households getting in on the action in the first 4 weeks.

Thanks to everyone who watched so far! pic.twitter.com/WqZWrW2gBV

I get what this means: more military-themed content is coming. There’s the upcoming Trigger Warning, in which Jessica Alba “plays a traumatized veteran who inherits her grandfather’s bar, and is faced with a moral dilemma after discovering the truth behind his untimely death.” According to Variety, “sources consider this a possible franchise starter and have high hopes for its success.” And a trailer recently dropped for Spike Lee’s new joint, Da 5 Bloods, which focuses on a group of Vietnam War vets and boasts an absolutely astonishing collection of actors, including Clarke Peters and Isiah Whitlock Jr. of The Wire and Jonathan Majors of The Last Black Man in San Francisco and Jungleland:

To be fair, Lee’s perspective seems to be something very different from the monotony of Extraction, 6 Underground, and Close, and maybe Da 5 Bloods and The Old Guard will provide some other options from the narrow “Westernized military forces bring peace and happiness by killing foreigners” clichés within which the action genre feels so trapped. Well, at least until Extraction 2 comes out.

← Reddit Asks the Question: 'What Movie Was Better Than the Book It Was Based On?' | Eight Mostly Forgotten Films that Have Resurfaced on Netflix During the Pandemic →