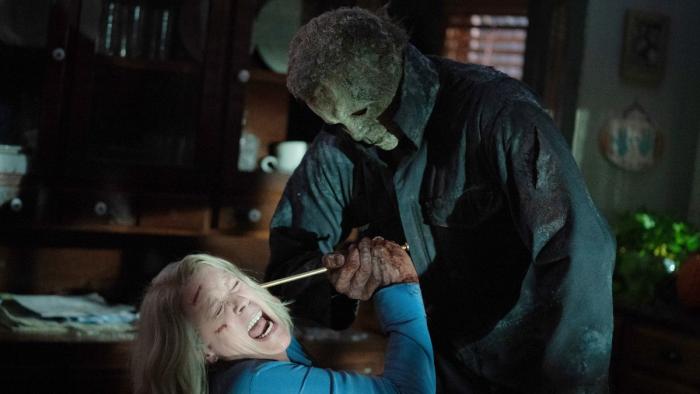 'Halloween Ends' Review: We are Finally Free From this Treachery

If you had infinite guesses as to where a botched Halloween finale would go, how many would it take before you got to, “Laurie Strode’s granddaughter falls in love with a Michael incarnate”? Probably at least a few. Well check that candy for razor blades, grab your Shatner mask, and buckle up because this is going to be a helluva ride.

We’re finally here, mercifully so, at the ending of the Trauma Trilogy, the third installment in the reboot of Halloween (1978) continuity that began with Halloween (2018). Director of all three, David Gordon Green, and his writing team (which includes Danny McBride) have sung about their trilogy being about trauma, female empowerment, and the fear of a motiveless regular man in a mask. And yet, their movies have never been about any of that. Halloween (2018) was about a seemingly supernatural killer with a vendetta against a comedic portrayal of a broken woman, Halloween Kills sidelined then slaughtered Strode women, and Halloween Ends is about newcomer, Corey Cunningham (Rohan Campbell), and his journey into the dark. This time, it’s not just the Strodes waiting in the wings, but also Michael Myers himself who has probably less than ten minutes of screen time. If there’s a part of this move that’s admirable, it’s that rather than giving us what we expected, the crew swung for the fences a la Halloween III: Season of the Witch.

And the proverbial swing comes by way of Corey, the babysitter who accidentally kills his charge on Halloween night in 2019, a year after the events of the first two movies. Corey is this movie’s shot at a Tommy (Jarvis, or maybe Doyle, the original one and not the one jammed into this series), a glasses-clad weirdo with a square jaw who is just a little bit too close to a killer. The movie flashes forward to 2022, a time when everyone listens to FM radio and Laurie Strode (Jamie Lee Curtis) is a pie-baking, skirt-wearing grandma. Laurie, having recovered from her ~*trowma*~ via Instagram graphic style therapy, takes a break from keeping house and writing her memoir to set her granddaughter up with the local alleged killer. Laurie isn’t afraid anymore. She’s gotten past … turning out to be exactly right that Michael Myers was going to come terrorize the town, him murdering her daughter and son-in-law, and now being on the loose and in the wind, no longer locked up in an institution. In Laurie’s world, Michael is but a memory to tap into for her book (which reads like a collection of last lines) and Halloween is a time for pumpkin pies and costume parties (“it’s tradition,” she tells her granddaughter, it being only a few years since she was a holed up Sarah Connor).

Allyson (Andi Matichak), despite her grandma’s insistence, doesn’t want to go to the costume party alone. She’s now single, her one boyfriend having been murdered by Myers and her latest ex being a creepy cop who harasses her. But luckily, Laurie’s setup works, and Allyson falls hard for Corey, a down-on-his-luck former babysitter now-mechanic recovering from trauma himself, something Allyson seems hot for. While Allyson falls harder for her sexy-sad biker-bad boy, he falls harder for evil. At his breaking point, some local toughs (the first New Jersey-like characters to ever grace Haddonfield) throw him off a bridge. He recovers from his fall like Catwoman, being dragged into a sewer and surrounded by rats where he runs into Michael Myers (oh yeah, Michael’s in this). After the two exchange eye contact and a choke, Corey slowly begins to absorb Michael’s essence and is reborn as evil himself.

It’s as exhausting as it sounds; the 1 hour and 51 minutes really feels like it. And that’s not for the fact that it’s got a lot happening, it’s more that nothing that happens makes a lot of sense or ever feels important. There are so many beats that feel like half-baked ideas or scenes that were only included upon reflection, like the one serviceable slasher scene that reads like someone noticed Michael doesn’t kill anyone, so jammed it in. There are unwelcome subplots about things like sexual harassment and cancel culture that serve to remind you just how off the mark every “theme” in this trilogy has landed. The explorations of trauma are just laughs at alcoholism, the explorations of female empowerment are just quips beside the women being injured or murdered, and this exploration of a town’s trauma is reduced to some weird evil-Spider-man bit complete with newly acquired 20/20 vision. This trilogy has never been about the Strode women; Laurie spends most of her scenes in a hospital bed or the kitchen, and Allyson functions in this movie as a conduit by which to drag men into the center of the frame. It’d be maddening if it wasn’t so boring.

But it’s not just about what the movie isn’t, it’s also about what it is— a messy collection of sluggish scenes with no thematic through line and a distinct lack of tension, excitement, or slashing. Even without firsthand knowledge, one can smell that this movie was mired by reshoots and notes as character motivations, actions, and dialogue never feel coherent and Halloween night seems to take place over the span of a week. The bore comes by way of conversational stand-offs and unwelcome narration. Myers shows up near the midpoint, and the slaughter-fest finale is populated by seam-laden practical effects, making everyone look like they’re, too, wearing a rubber mask. The cinematography really tried it with innovative mirror shots and sewers used for shapely framing. References to the original series serve to make the fans feel like they’re in on everything, but they also feel ramrodded in so as to insist the makers love Myers as much as you do.

David Gordon Green and company insisted they wanted to make their Halloween movie and have stumbled and tripped at every turn. Not only did they miss the mark on the themes they insisted they were exploring, but seem to have completely misunderstood everything that made the John Carpenter/ Debra Hill movie magical. For their third outing, they seem to have misunderstood everything that made the Rob Zombie reboots work. Halloween Ends is not just disjointed in and of itself, it feels like a marked departure from the first two installments that renders them conclusion-less fluff. It’s an affront to think these movies were ever exploring the trauma of the Strodes, and it’s a laugh to think they’re good Michael Myers slashers. I’m honestly relieved it’s finally over.

Halloween Ends is available in theaters and on Peacock on October 14, 2022