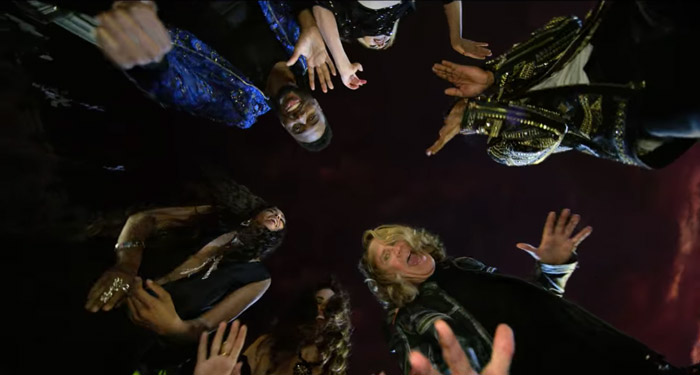 Every Cameo In 'Eurovision Song Contest: The Story of Fire Saga'

With Eurovision Song Contest: The Story of Fire Saga, Will Ferrell and company hope to share the quirks and joys of the real-life international song competition with American audiences, who might not know the depths of its history, pleasures, and performances. To help you wade into these wonders, we’ve reviewed the musical rom-com set amidst an imagined Eurovision. We’ve tapped an expert to unveil Easter Eggs, allusions, and backstory. Now, we’re plunging into the many cameos that this charming comedy has to offer.

Here’s our guide to every cameo in Eurovision Song Contest: The Story of Fire Saga, from comedy scene-stealers to pop princesses and all the international stars who join forces in that sensational song-along.

In Eurovision Song Contest: The Story of Fire Saga, Norton plays a snarkier version of himself as a commentator for the competitions, bringing verve to lines like, “Another adventure with the Icelanders.” However, Irish comedian Graham Norton might be best-known stateside as the host of The Graham Norton Show, a chat show were celebrities get comfortable and cut loose with wild stories and unfiltered opinions. 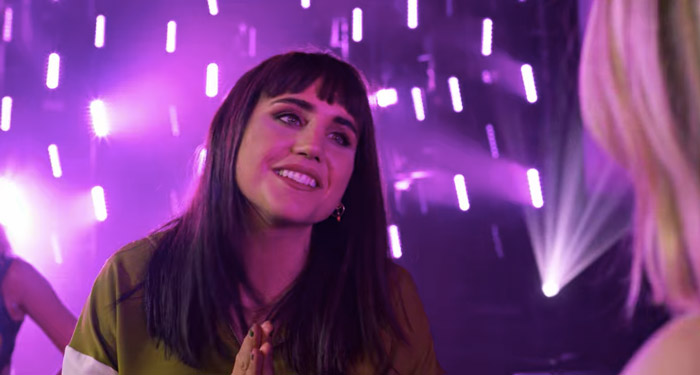 Between What We Do In the Shadows and Big Flower Fight, we at Pajiba have gone gaga over English-Cypriot comedian Natasia Demetriou. On the FX series, she plays a smirking vampire with an unapologetic lust for men, menace, and blood. In Eurovision Song Contest: The Story of Fire Saga, Demetriou channels that wicked sense of humor into sneering choreographer Nina, who yells at a bewildered Sigrit, “Do you have a sickness in your legs? Are your feet very sad?” And just like that, we’ve learned getting yelled at by Demetriou is our new kink. 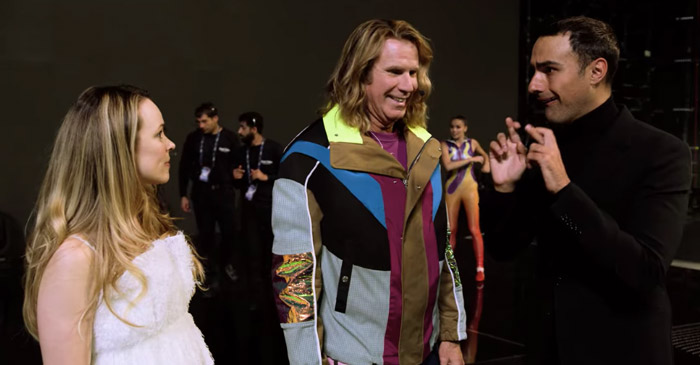 Relation to Natasia? Yes! Jamie Demetriou is her brother. In the film, the siblings’ scenes with Fire Saga, as Jamie plays Kevin Swain (KEVIN SWAIN!), creative director extraordinaire! You might also recognize him from Fleabag, where he played the easily flustered Bus Rodent. 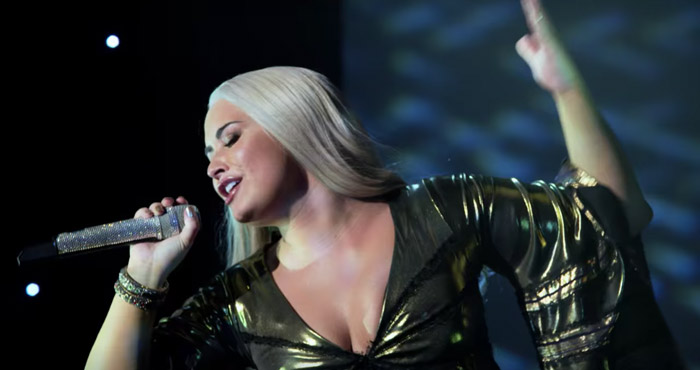 American pop star Demi Lovato has had a slew of hits like “Give Your Heart a Break,” “Cool for the Summer,” and “I Love Me”. So the former Disney child star is perfectly cast in Eurovision Song Contest: The Story of Fire Saga as Iceland’s premier singer, Katiana Lindsdottir, who belts out “In the Mirror.” Sadly for Katiana, her dreams of Eurovision glory go up in smoke. 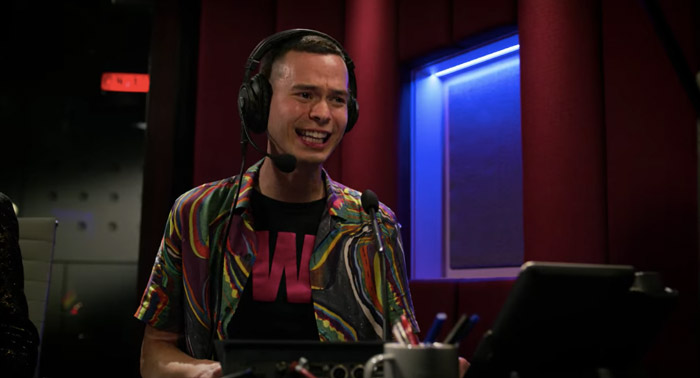 Editor of the Eurovision-focused Youtube channel Wiwibloggs, William Lee Adams has a brief cameo as himself, popping up in the commentators’ box during the competition sequences. 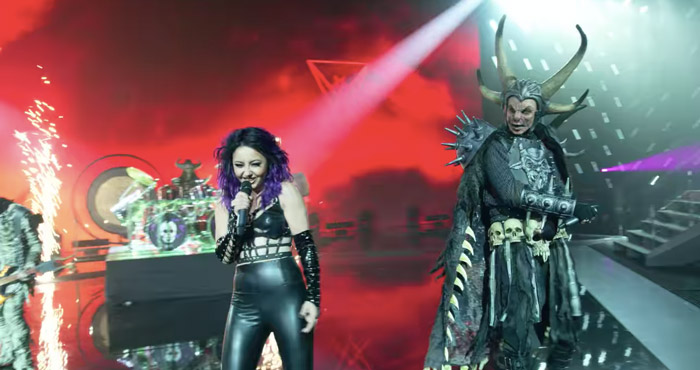 Credited as “herself,” this Lithuanian actress pops up in the performance montage as part of the fictional Belarusian band Moon Fang. This metal act is cleary inspired byt the Finnish metal band Lordi, down to the creepy prosthetic costumes. 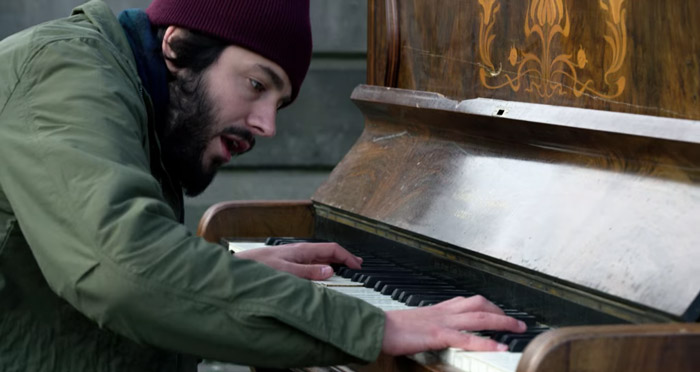 In 2017, this Portuguese singer won the Eurovision Song Contest with his song “Amar pelos dois.” As pointed out by our Eurovision expert, this was a rare victory, as English-language songs most often take the top spot. In Eurovision Song Contest: The Story of Fire Saga, Sobral’s winning tune plays song over the montage of Lars and Sigrit playing tourists all over Edinburgh. Look close at the end, and you’ll see the busking piano player is Sobral in person.

The rest of the Eurovision cameos in film are concentrated in the incredible Song-Along that takes place at the party of Alexander Lemtov (Dan Stevens). Singing along with the fictional Eurovision competitors are real past contenders! Here’s the who’s who: 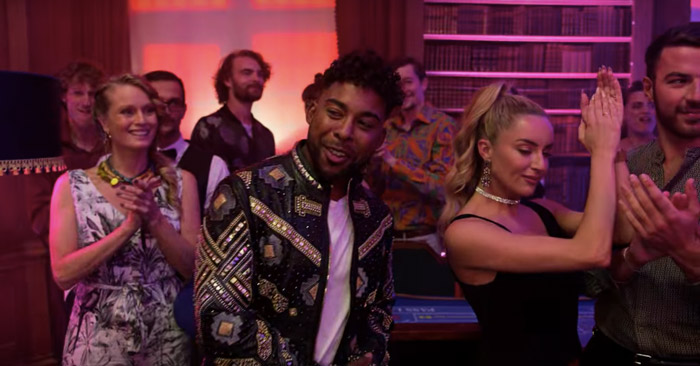 The Song-Along is kicked off by Swedish pop singer John Lundvik, whose “Too Late For Love” placed fifth in the 2019 Eurovision Song Contest. This year, he had a hand in composing France’s entry, “The Best of Me.” However, with Eurovision 2020 canceled, the song is barred from competing in the 2021 competition. All songs must be new. Better luck next year, Lundvik! 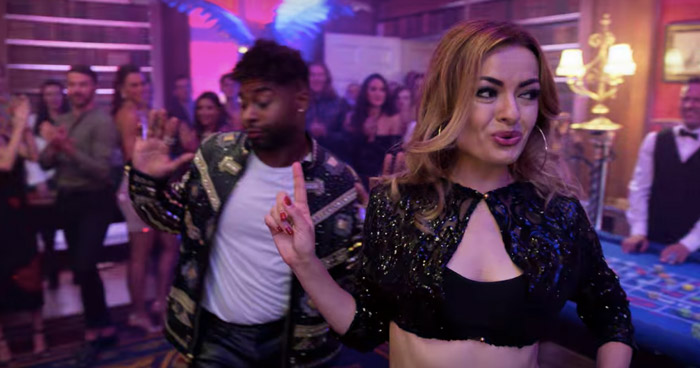 Moldovian singer Anna Odobescu represented her native nation in Eurovision in 2019 with “Stay.” Unlike Fire Saga, see didn’t make it out of the Semi-finals. 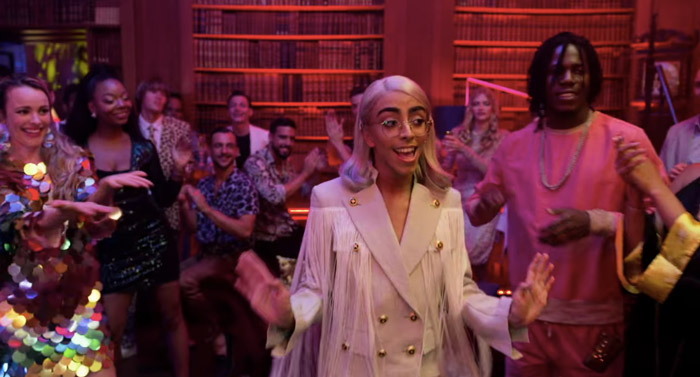 Representing France in 2019 with “Roi” was homegrown singer and Youtuber Bilal Hassani, who competed in the televised prelim Destination Eurovision 2019 to score his spot. At the Eurovision Song Contest finals, Hassani placed 16th. 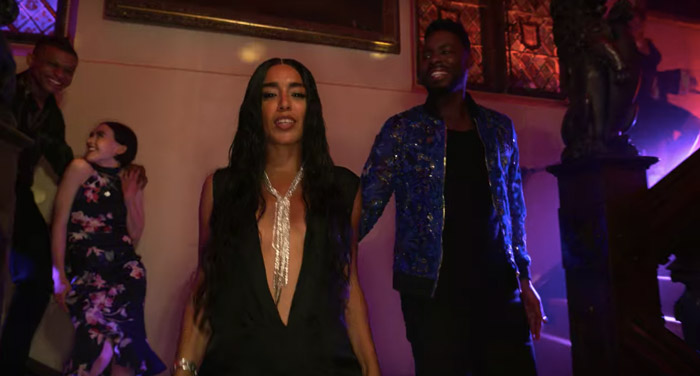 Making a grand entrance on a grand staircase was this Swedish pop victor. Loreen won Eurovision Song Contest 2012 with “Euphoria.” The following year, she returned as the Semi-finals opening act and performed in the interval spot of the finals. 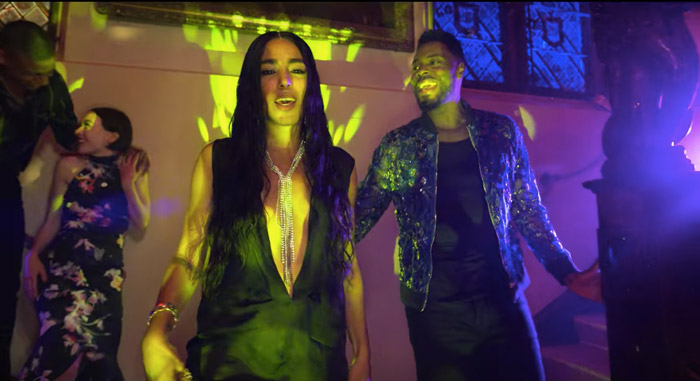 French-Congolese singer Jessy Matador joins Loreen on the stairs, but is best known for representing France in 2010. With “Allez Ola Olé,” he came in 12th, which was one of the nation’s best rankings in the ’00s. 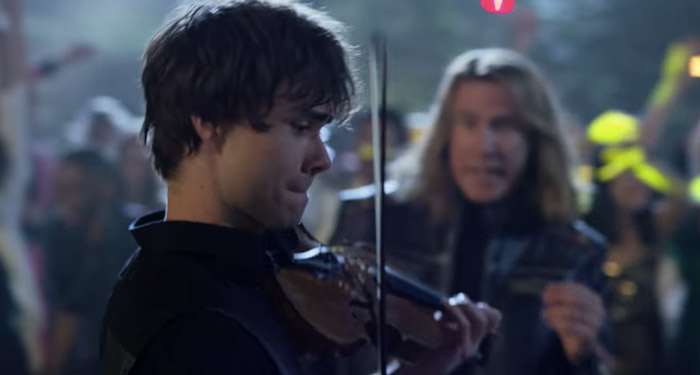 Playing violin at this party jam session is Belarusian-Norwegian Alexander Rybak, who represented Norway in 2009 with his song “Fairytale.” Not only did he win, but with 387 points, he scored the highest points in the history of Eurovision at that point. Then 23, he also made history as the youngest solo male winner of the contest as well as the only Belarusian-born winner. Rybak returned to Eurovision in 2018, competing for Norway with “That’s How You Write a Song,” which placed 15th in the finals. 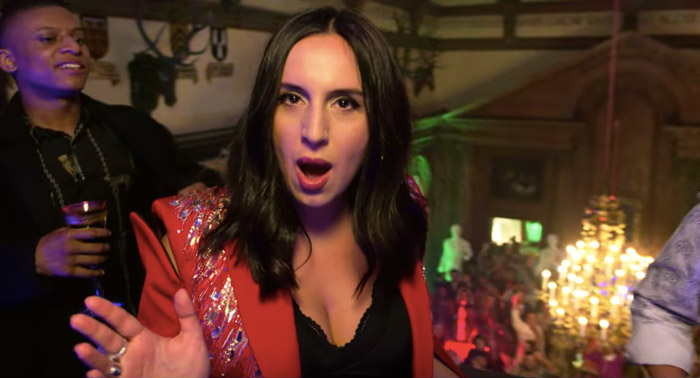 Ukrainian singer Jamala won Eurovision 2016 for Ukraine with “1944.” This was controversial because her song was about the Stalinist Regime’s expulsion of the Crimean Tatars from Russia. As such Russians were outraged by the number. Typically, politics are kept out of Eurovision and its content. So, “1944”s win was monumental. Following her victory, Jamala was awarded the People’s Artist of Ukraine title, the highest honor the nation can bestow on a performing artist. 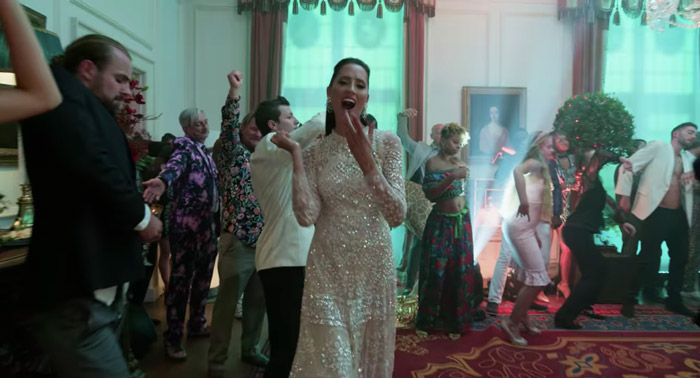 In 2018, soprano Elina Nechayeva competed for her homeland of Estonia with “La Forza.” Ahead of Eurovision Song Contest: The Story of Fire Saga’s release, this playful opera singer teased her involvement with a cheeky cover of Saga Fire’s Volcano Man.

Thomas Neuwirth is an Austrian singer whose drag persona is Eurovision Song Contest 2014’s champion. Conchita Wurst won for Austria with “Rise Like a Phoenix.” This proved a fitting song considering she’d just missed representing Austria in 2012, placing second in the nation’s selection contest. Now, Wurst is arguably one of the most recognizable faces of modern Eurovision thanks to her amazing voice and her groundbreaking drag performance. 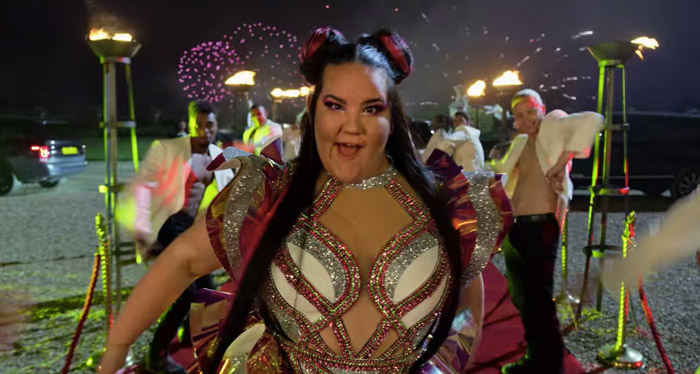 Last but not least, Israeli singer Netta was the winner of Eurovision Song Contest 2018, thanks to her explosive performance of “Toy.” To snag the opportunity to represent Israel at the contest, Netta first had to come out on top of the reality-TV singing competition HaKokhav HaBa. She sang covers of Rihanna’s “Rude Boy,” David Guetta’s “Mama,” and Spice Girls’ “Wannabe” to climb her way to victory and the Eurovision spot that would lead her to worldwide acclaim.

‘Eurovision Song Contest: The Story of Fire Saga is now on Netflix.

Image sources (in order of posting): Netflix, all Netflix