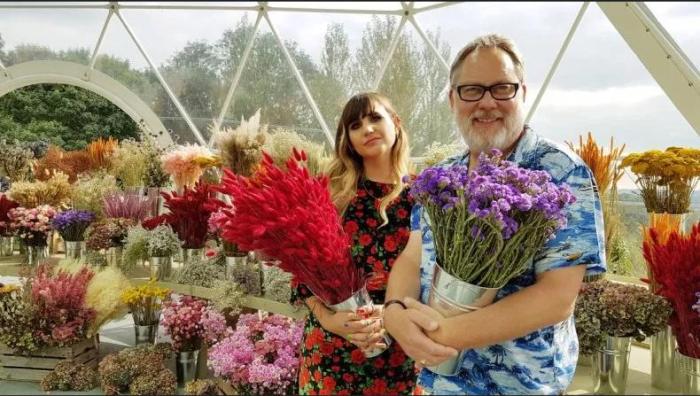 6 Reasons You Must Watch Netflix's 'The Big Flower Fight'

Hungering for something sweet, suspenseful, but not-so-serious to stream? The Big Flower Fight is ready to be you’re next binge-watch. New to Netflix, this reality-TV competition series welcomes audiences into the gorgeous and wild world of floral sculpture. Okay, watching flowers be planted might not sound thrilling. However, we’ve got a feeling this show will grow on you.

Check out the 6 reasons why you must watch Netflix’s The Big Flower Fight: 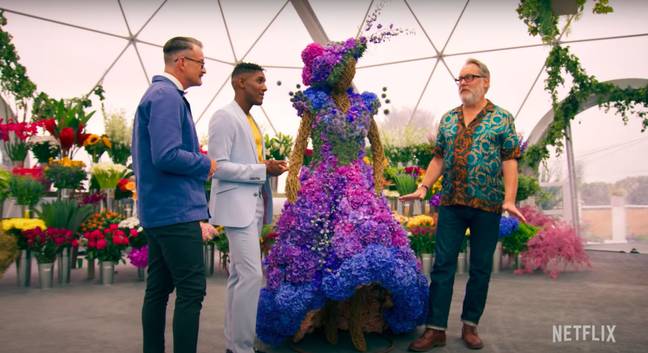 Admittedly, I’m a sucker for this category of documentary. Be it Air Guitar Nation, Stuffed, or my all-time favorite The King of Kong: A Fistful of Quarters, I love the journey of discovery such docs offer. Sure, at first you might think air guitar isn’t a worthwhile pursuit, that taxidermy is creepy, or that beating arcade high scores is child’s play. However, hobby docs know you enter dubious, by the end their goal is to make you a believer. So, you might tune in to The Big Flower Fight and hear phrases like “floral sculptures” and “avante-gardening” and roll your eyes. I sure did. But by the end of episode two, I was hooked!

You can be a total newb coming into The Big Flower Fight. Its co-hosts and judges will step you through what you need to know. Essentially, there’s a world of floral sculptures out there, and this competition series is blooming ready to be your introduction. Each episode, contestants are given one challenge, like build a giant bug, wearable fashion, a towering throne, or a massive sea creature. Every challenge offers one tricky requirement, like contestants must use live flowers, or dried ones, or edible plants, or only grasses. From these, a top two will be praised, with one being dubbed “Best in Bloom.” Then, one of the bottom two will be sent home. The winner of the finale will get a giant award ribbon as well as the chance to display their work in Kew Gardens, London. 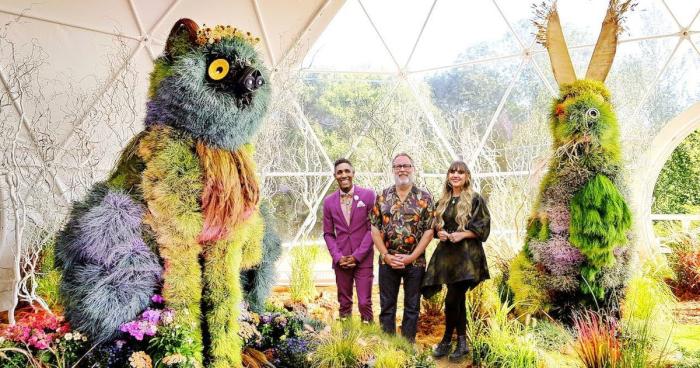 You might hear the cheery British accents and see the domed greenhouse where the contest is held and think this is a flowery rip-off of the beloved baking series. However, that’s not quite the vibe of The Big Flower Fight. There’s a convivial atmosphere under the dome with jokes and plenty of smiles amid intense work. Like the sweet competition series, the contestants even jump in to help each other in times of need, like when one team risks running out of time before completing their sculpture, or when a towering construction threatens to topple. It’s a heart-warming thrill to see others rush to the rescue. But there’ll be shadier dealings too.

In the sabotage-encouraged cooking series Cutthroat Kitchen, contestants often snatch all of a certain ingredient from the pantry to trip up their competitors. The Big Flower Fight’s contestants pull this trick too, which leads to conflict and theft. Once the nursery is open, all is fair in plant-picking. Some teams will scoop up all of one bloom or accessory, pushing other teams into confrontations, compromise, or in one case a bit of cheeky thievery.

Before you judge: it should be noted there are no hard rules about the nursery or apparently theft from others’ work stations. However, a guest judge did intervene when she saw most of the contenders crowded around one flailing project, reminding them this is a competition. She shooed them away. 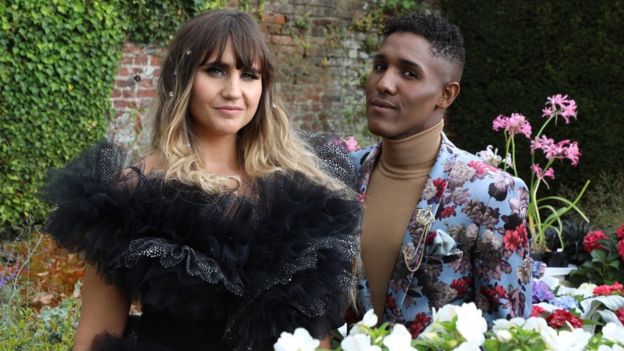 It’s Got Nadja from What We Do In the Shadows
This was actually what planted the seed for my The Big Flower Fight binge. (H/T Jenni Miller!) Natasia Demetriou, who plays the smirking vampire queen of the bloody hilarious comedy series, co-hosts the competition alongside English actor Vic Reeves, who is jovial and I’m sure lovely, but who I nonetheless resent for not being Natasia.

She brings the same kind of off-kilter humor to this reality show that she brings to What We Do In The Shadows. With a dry yet zany wit, she quips about the sample sculptures, the contestants, and herself, like grabbing a pair of grass sheers and excusing herself for some long-delayed leg hair maintenance. Always dressed with a glamorous garden party elegance and a crooked smile, she’s beautiful and bemused as she calls the contestants her “sweet angels,” “floral best friends,” and “my little potpourris.” With style, sass, and a streak of warm-snarks, she gives a kick to this could-be cutesy series.

A Bouquet Of Quirky Teams
The series starts with ten teams of two who must impress “florist to the stars” Kristen Griffith-Vanderyacht and whatever expert/guest judge he brings along for a particular challenge. You might expect a show about floral sculptures to cast a slew of florists. But The Big Flower Fight scoffs at your assumption. Sure, there’s a few florists, gardeners, and landscapers in the bunch, hailing from Baltimore, Denmark, London, and Dublin. There’s also a Brooklyn dancer, green-thumbed Instagram influencers, a demanding fashion designer, and a dashing DJ. You might arc an eyebrow as teams detail their out-the-box ideas or admit their lack of plant knowledge. However, it’s soon easy to see why each was cast, as they display a dizzying blend of creativity and character. 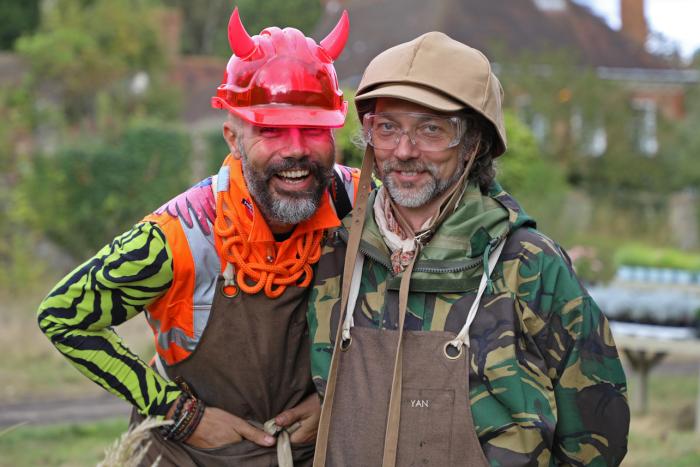 Fashion Pirates
With twenty people in the competition, The Big Flower Fight could be a battle for screentime. But Yan and Henck refuse to be overlooked. Long-time besties, these two share a passion for floral sculpture and fashion. Each episode, they dress like they’re going to a fabulous costume party or discotheque, adorned in turbans, top hats, bold colors, wild prints, and silvered beards. Sometimes they dress as pirates, sometimes as sailors, sometimes it’s delightfully impossible to peg down their look. Plus, each episode, Henck shakes up his hairstyle, popping on playful wigs, or treating his buzzcut like a painter’s canvas, perfect for patterns or the recreation of a halved watermelon. As you might imagine, such colorful characters have big ideas for each challenge, and so they quickly become the ones to watch, for more reasons than the first. 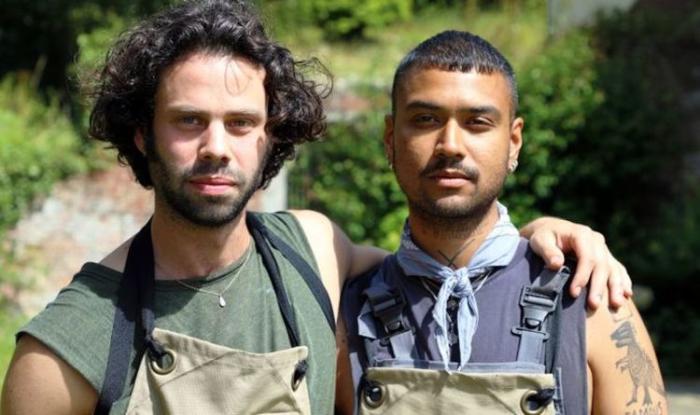 Love Blooms
It can be downright stressful watching team-competition shows. Couples who began lovey-dovey might descend into divorce-worthy quarreling. Best friends might bite at each other; families might feud. However, despite its name, there are few fights in The Big Flower Fight. Instead, the focus is more on how teams are brought together in creativity and competition. Ever-smiling roommates Helen and Andi have a deep-seeded friendship that no plant-based predicament can kill. “Lad and dad” team Ralph and Jim deepen their bond through these growing trials. When the teen’s confidence falters, his father is there to encourage, confer, and guide. Through interviews and personal projects, they share their stories and struggles, then transform then into topiary artistry.

Yet the most engaging love story of Season 1 blossoms from a pair of dark horses. Out the gate, Ryan and Andrew admit they’ve never done anything like the 8-to-10 foot tall floral sculptures demanded each challenge. One is a DJ/art curator while the other is a “photographic artist.” But these London-based boyfriends trust in each other, their ingenuity, vision, and love of taking a big risk. All of this makes for works that are breathtaking and unpredictable. As we watch them advance in the competition, we get to see more and more of them just being a couple who enjoys creating something beautiful together. You might begin to think it doesn’t matter if they win the big prize because they are already winners. But…wouldn’t it be cool?