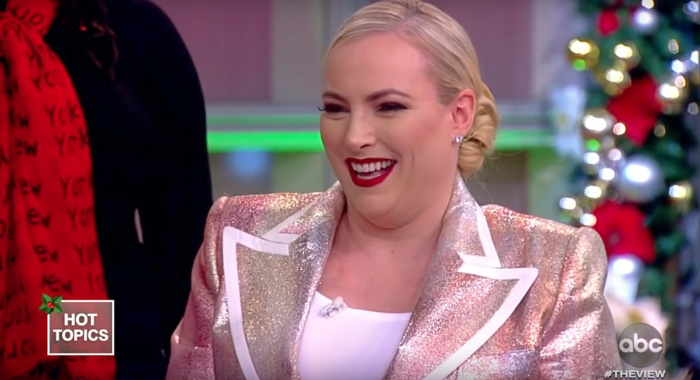 Why Did Abby Huntsman Really Leave 'The View'? Take a Wild Guess

On Monday, Abby Huntsman made a surprising announcement that she’s leaving The View at the end of the week. During an extremely awkward segment, she did her best to try and sell that her decision was based on joining her father’s gubernatorial campaign even though Abby’s spontaneous departure came directly on the heels of another week of Meghan McCain drama. If you have just a passing knowledge of The View, it’s almost impossible not to connect the dots between the two events, and you’d be right, because the real reason for Abby leaving is Meghan. Turns out where there’s smoke, there’s a jar of Hellmann’s on fire.

Normally, these behind-the-scenes dust-ups are a smorgasbord for tabloids and petty little bloggers named Mike. And right on cue, here’s Page Six going to town with sources claiming that Abby was tired of a toxic work environment that ABC had no intention of fixing, which is evident every single time a gargoyle chiseled from pure, uncut white privilege perches itself on the panel and breathes The Federalist talking points until its enemies bleed from the eyes and throw to commercial.

However, what I didn’t expect was a full-on CNN Business report from Brian Stetler and Oliver Darcy who spoke to “half a dozen” sources that painted an extremely obnoxious picture of Meghan McCain and lays the reason behind Abby’s departure at her hooves.

Huntsman and McCain, both of whom hail from famed Republican families, were allies behind the scenes until recently, when there was a dispute between the two women, some of the people familiar with the matter told CNN Business.

The conflict was over Huntsman’s on-air enthusiasm for her children, the people said. McCain, who wrote an op-ed in The New York Times about her miscarriage last summer and has continued to talk publicly about her fertility challenges, suggested to Huntsman that the child-centric chats were insensitive.

Following one episode, McCain confronted Huntsman for bringing up her kids on the show. Word of the “baby fight,” as one person called it, quickly spread around “The View” and strained the relationship between the two women.

“Abby was sick of being berated by Meghan for perceived slights,” one of the people said. “She ultimately decided she didn’t need this job and it wasn’t worth it.”

The report also cited a toxic work environment that was allowed to fester, and according to sources, Abby specifically informed Barbara Fedida, senior vice president of talent at ABC News, that her reason for leaving was that environment. Considering Abby is out the door, and Meghan spent today playing pretend journalist with Chuck Schumer, you can practically see the equation “ENTITLED BEER HEIRESS + BEN SHAPIRO TWEETS * DECIBELS = RATINGS” floating in the air.

As a man, I’m extremely hesitant to touch Meghan forbidding her best friend from occasionally mentioning her infant twins on a — *checks notes* — daytime talk show about the lives of women. Although, this does add some rich context to Meghan opening the new season by telling Abby straight to her face that she doesn’t care if her kids get shot because Meghan loves her PEW PEW sticks, goddammit! Maybe I’m out of line here because, again, I don’t have a uterus nor have I experienced the grief of losing a parent, but it really seems like Meghan has a blank check to act like a holy terror. No matter what bullshit she pulls on any given day, she just turns around and says, “Oh, my dad died” or “I had a miscarriage,” then it’s rinse, lather, repeat.

If that’s an unfair read of the situation, please, light up my dumb ass in the comments. But, man, it really looks like ABC is not only banking on but fueling that exact brand of dysfunction for ratings gold, and Abby probably won’t be the first casualty.