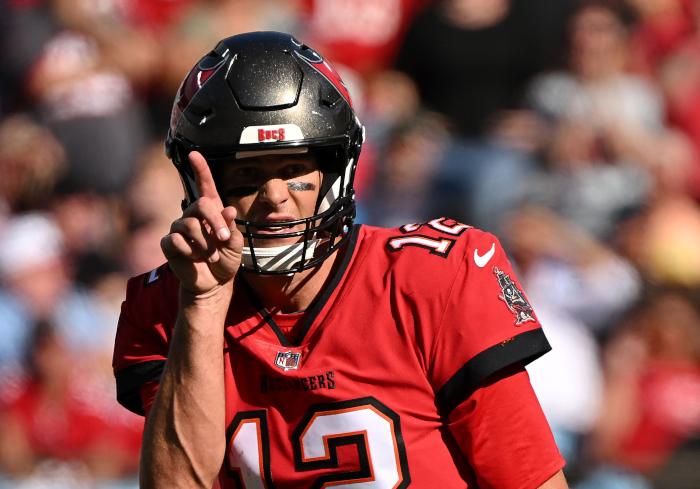 It’s an overused phrase, but what could be more apt here than, “Of course he is.” Back when Tom Brady wore that Make America Great Again hat, there was a part of me that thought, “You know? He was probably just goofing around. I’m sure he wasn’t that serious about it,” and the fact that Brady distanced himself from TFG over the years seems to confirm it (his soon-to-be-ex-wife Giselle Bundchen insisted that neither she nor Brady actually voted for TFG).

Now that Brady and Bundchen are headed to splitsville (and it is reportedly getting nasty), I guess Brady is ready to let his Republican freak flag fly. According to the Times, Brady — whose Bucs got their asses kicked by literally the worst team in the NFL yesterday, a week after losing to another one of the NFL’s worst teams — is a texting buddy with Florida Governor Ron DeSantis, which I’m sure that TFG is displeased about.

“I took Governor DeSantis to the Packer game at Lambeau Field,” [Tim Michels, the GOP Candidate for Wisconsin Governor] told a gathering of the Lake Country Patriots, a far-right group, on Thursday at a brewery in Oconomowoc, Wis. …

Mr. DeSantis, who on the day of the Packers game had appeared at a rally for Mr. Michels and Senator Ron Johnson of Wisconsin, “had never been to Lambeau Field before and he wanted to go,” Mr. Michels said. “We’re sitting there, you know, we’re watching the game and all of a sudden, I look over and he’s texting and he says, ‘How do you spell Lambeau?’”

I want to say that the bigger story here is that Ron DeSantis doesn’t know how to spell Lambeau because, honestly, Brady seems like a DeSantis kind of guy. Meanwhile, Michels also said that — if he’s elected governor — he desperately wants to be friends with Aaron Rodgers. It’s funny because aside from being NFL quarterbacks, Brady and Rodgers are the opposite of the sort of meat-eating, red-blooded middle-American folks whose votes DeSantis and Michels are trying to court. Brady is an insanely wealthy man who doesn’t eat foods that are red, fruits, or coffee, while Aaron Rodgers is into some weird, woo-woo new-age mysticism. He may be anti-vax, but he’s also into crystals and horoscopes, which just goes to show how the far right and the far left sometimes bleed into each other.

I’m just going to sit over here and continue to enjoy watching Tom Brady throw it all away for a 3-4 team that got shellacked by the Carolina Panthers.