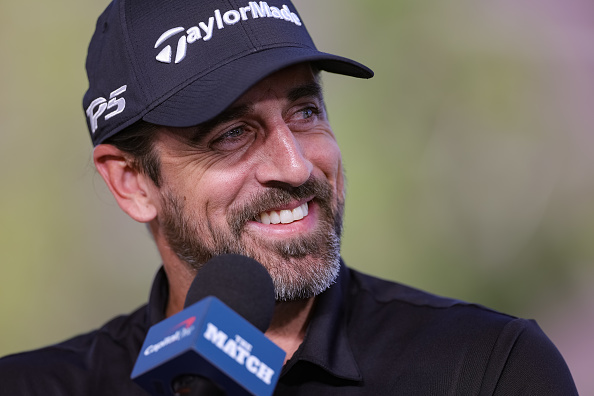 Aaron Rodgers Rumored New Girlfriend Is Something Else

Having spent however long he did with Shailene Woodley, Green Bay Packers quarterback Aaron Rodgers has apparently decided to stay on the woo woo train and take it all the way downtown. The rumor is he’s dating a woman named Blu, although she herself denied that her name is “Blu of Earth” (though that is her Instagram handle) and she also denies that she’s a “witch,” although she did not deny that she was dating Rodgers.

Blu is, uh, something else. She was in a different relationship earlier this year with a, uh, very special person.

In May, however, she and her boyfriend “consciously uncoupled,” and she is exactly the kind of person who uses that phrase unironically. She’s also exactly the kind of person who (here around the 21-minute mark) says that the pain in the “quantum data computer of our bodies” that we are failing to express outwardly is “contributing to the wars we see on the planet when it’s not being felt.”

After her May break-up, she said that she had moved out of her home and was “patiently waiting for the alignment of the next home for [her studio] set to manifest.” It’s unclear if it has manifested itself in Aaron Rodgers’ game room, but you can continue to take her online course: Florescence: A Life of Absolute Magic 101.

There’s no word on her vaccination status, but I’m guessing she wards away viruses with incense and white-lady magic. And if she’s not dating Aaron Rodgers, I think they’d make a wonderful couple.


← 20 Facts You Might Not Know About the Original 1993 'Jurassic Park' | Review: 'Interceptor' is a Casually Unhinged, Braindead Load of Occasionally Amusing Nonsense →