‘Thank you for asking because not many people have asked if I’m okay.’

There are many moments in Meghan Markle, the Duchess of Sussex’s exclusive interview with ITV that made me sit up and take notice. The obvious look of pain in her eyes as she struggled to publicly convey her emotions on the smothering scrutiny she’s faced since entering the Royal Family was undeniably moving. For a major figure of royalty and celebrity, one who has always been characterized by her charisma and eloquence on the worldwide stage, to see Meghan battle to find the right words hit home hard in a surprising manner.

The ITV documentary Meghan and Harry: An African Journey saw the pair open up about mental health struggles and the scrutiny of the press, with Meghan even admitting that her British friends told her not to marry her husband because the British tabloids would tear her apart.

It’s been hard to open up a British newspaper or browse the hellish annals of Twitter without encountering some form of truly insidious anti-Meghan rhetoric. We’ve written before about the extensive harassment she’s faced since becoming known the world over as Prince Harry’s girlfriend, and how the tabloids have seemingly found a way to blame each of the world’s many ills on Meghan. She’s been lambasted for everything, from ‘narcissistically’ holding her baby bump too much in public to aiding environmental devastation through her love of avocados, to bringing shame upon the Windsors for guest-editing a magazine. Every step she makes is branded as ‘breaching protocol’ or ‘breaking with tradition’, regardless of whether other women in the family have already done such shocking things as wear strapless gowns or fly on jets.

These tensions came to a climax when it was revealed that the Sussexes planned to sue several tabloid newspapers on a variety of charges, including phone hacking, breach of privacy, and infringement of copyright. A statement given by Harry took note of the ‘relentless propaganda’ Meghan faced at the hands of the press, which included ‘knowingly false and malicious’ information. Throughout it all, we’ve never seen Meghan’s gracious and vibrant public smile slip, which is what made that interview clip so striking.

The Windsors have stridently operated on the ethos of, ‘Never complain, never explain.’ It’s a simple philosophy of silence and forward movement. Don’t release press statements rebutting or calling attention to any salacious stories, don’t be seen to be moaning or protesting your plight, and never look back, no matter how tough weathering the storm may be. This strategy has always been something of a mixed bag for the royal family. Keeping quiet after Diana’s death made people turn very quickly on the Queen until she gave a statement, and silence is hardly a winning tactic for Prince Andrew following his friendship to noted pedophile Jeffrey Epstein. Prince Charles has been a savvy player of the press, far more so than his parents or siblings, and it’s one of the reasons his own reputation has improved over the years, along with that of his wife Camilla. His sons have taken a more cautious approach, an understandable stance given how tabloid culture treated their mother, but they know this is not a game they can exclude themselves from. Kate will always don a full face of make-up and parade her newborn children around mere hours after their arrival because it’s one way to keep the papers happy. Harry and Meghan invited ITV to film a documentary of their recent royal tour in Africa as a means to show off their good deeds in a controlled narrative, and it’s here where Meghan and Harry let their guards down. This is not to downplay the magnitude of her feelings or dismiss what has happened. Even with the most sympathetic people in her corner, it was still a major risk for Meghan to show even the slightest slivers of emotion.

Being an emotional woman in public is a very easy way to get people to hate you. I’m an exceptionally easy cry and I can’t tell you how many times I’ve run to a quiet corner to have a little weep to myself and had people openly gawking at me with scorn and mockery. It’s happened in places I’ve worked, classes I’ve taken, doctors’ appointments, and on one especially horrific occasion with the job center guy who was in the middle of calling me a snob. It’s a ridiculous double-edged sword: Women are so widely written off as overemotional shrews or cold fish b*tches and either option is seen as instinctively tied to gender. The preferred option is to smile and shut up.

Meghan has never shut up. Even before she married into this archaic and historically misogynistic institution, she was outspoken on issues of feminism and activism, talked giddily about her love of food and fashion, and showed all the traits of possessing a personality. That’s patronizing, I admit, but think about how Kate Middleton never got to do that before or after she married Prince William. The vast majority of the British public didn’t even know what Kate sounded like until the engagement interview. Meghan, by contrast, lived her life without the ceaseless awareness of her impending royal status. She had a high-profile job, took the many opportunities open to her, be it starting her own blog or guest-judging reality shows, and spoke out against Donald Trump. Her willingness to speak and be put front and center above her husband has made her highly effective in a public role that nobody could ever be fully prepared for. Kate has had her fair share of tough times too (remember the naked photos?) but stays silent and the press loves her for it. This speaks to wider issues with how the royals prefer their women, especially those who marry into the family, but it’s also a strong contrast to Meghan. Why should she keep calm and carry on? Right now, the only people that overused slogan seems to benefit are those who mock her struggle.

Spending so much of your energy defending the institution of monarchy is kind of ridiculous, especially if, like me, you can’t wait for the whole enterprise to be chucked in the bin. From that angle, I can see why it would seem frustrating for some to invest as much as they have in defending Meghan. However, I’ve no time for those who think empathy is unnecessary for women who are rich or have chosen a public life. Yes, she married into this family and on some level must have known what she was signing up for but that doesn’t justify the ceaseless misogyny, racism, and xenophobia she’s had to deal with. Her being in the spotlight does not give the tabloids or anyone else the right to deny her emotions or the permission to say whatever bigoted thing they want to about her.

Meghan Markle is an American woman of color who has been put in a position that only a handful of people will ever fully experience and understand, all while under the harsh gaze of the world and the overwhelming expectation that she sell the rest of her life as a fairy tale. No amount of press dirt, gaslighting from her family, racist abuse, or misogynistic slurs is meant to tarnish the exhausting labor she must conduct every day. That’s one of the reasons her show of emotion and her admission that she isn’t doing great right now has angered so many: They demanded a show and she had the gall to reveal the personal cost.

It’s also a real shame that Meghan even had to get as emotional as she did. One shouldn’t have to spill their guts out to the cameras to legitimize the pain they’re experiencing. Our culture has never had the greatest attitudes towards new mothers (especially for women of color, who face shockingly high mortality rates in childbirth and whose pain is more likely to be dismissed by doctors), and it shouldn’t be such a surprise for Meghan to be asked if she’s doing okay. You can’t set up a woman of color in a bigoted system, malign her at every moment, then play the outrage card when she shows her feelings on the matter (and yes, there have already been people claiming she’s faking her emotions and you can’t feel sorry for her because of all the other women in the world having a tough time, women I’m sure these people have always cared about and didn’t just employ to be their strawmen.)

It is somewhat ironic that the press and public who demand everything of celebrities, including their humanity, seem put off by Meghan’s emotional display. It’s too much, all of a sudden, it’s the pulling away of the curtain that reveals more than they wanted. Everyone wants their pound of flesh until the ultimate price is paid, and Harry is more aware of that than anyone else. 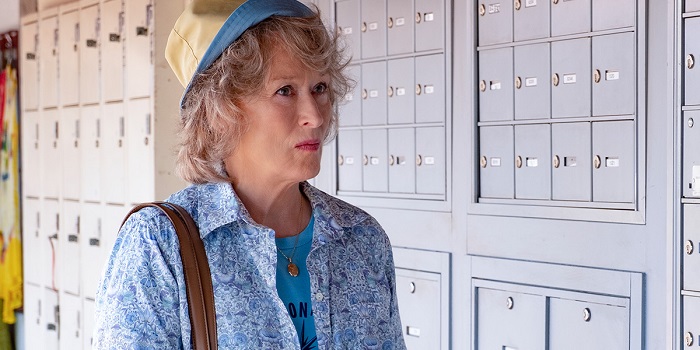 ‘The Laundromat’ is a Rare Misstep for Steven Soderbergh, a Film With Meta Experiments More Condescending Than Empowering