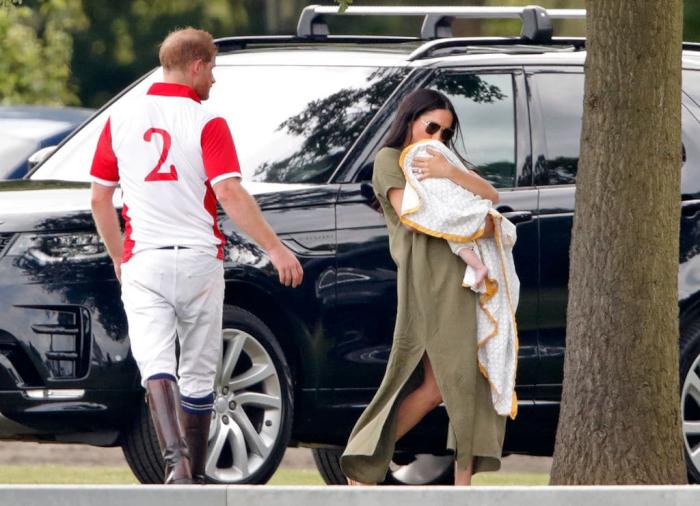 Welcome back, friends and foes, to another exciting round of the world’s most exhausting game show, What Is Everyone Blaming Meghan Markle For Now?! That’s right, we’re back so soon. It’s almost as if the British press are sexist and racist and xenophobic and need to talk about something, anything, other than recently arrested accused sex offender Jeffrey Epstein’s long-time connection to Prince Andrew. Well, that or Meghan is truly a scourge on the monarchy because something something American.

But I digress. On with the show. What shocking and unforgivable crime has Meghan been accused of this week? We could be here all day, alas, with some of the biggest nonsense, including a total non-story over Meghan’s ‘diva behaviour’ at Wimbledon that was mostly her security guard doing his job properly, but let’s focus on the British press’s most beloved activity: Shaming mothers.

Meghan took baby Archie Harrison on his first public outing to the Billingbear Polo Club where his dad and uncle were playing in a charity match (just in case you forgot these people were posh).

It took basically no time at all for Meghan to be called the worst mother on the planet for *checks notes* holding Archie at an angle deemed improper. Apparently, this is a thing you have to deal with after incubating and pushing a living human being out of your body?

She can't have any maternal instincts at all. Archie's neck and whole body not supported by her at all. No sun hat to protect him.

Smother, I mean, Mother of the Year award goes to Meghan Markle! Archie looks so uncomfortable. Poor kid. Being used as a prop by her mother. pic.twitter.com/kqbBQj2OTx

There are more but frankly, why would I clog up valuable internet space with them? Rest assured, the usual suspects think Meghan is the axis of evil because she’s holding her baby in a way that is actually commonly recommended by parenting experts.

But come on, we know this isn’t the real royal story right now, right?

As we mentioned in the first paragraph, the bigger issue right now is Mr. Jeffrey Epstein and his extensively documented connections to Prince Andrew. This is something we’ve known about for many years. The Guardian wrote a piece on the friendship in 2015, and noted the accusation that ‘Epstein forced another of his teenage victims into sexual encounters with Andrew on three separate occasions.’ The pair have been friends or at the very least acquainted since the early ’90s.

As noted by The Cut, Epstein also arranged via Andrew to give his ex-wife Sarah Ferguson a large loan of around $18,000. Ferguson later apologized for this and said ‘I abhor paedophilia and any sexual abuse of children and know that this was a gigantic error of judgment on my behalf.’ At the time, Andrew was serving as Britain’s Special Representative for International Trade and Investment, but he stepped down from that role in July 2011.

The Palace and Prince Andrew (who is reportedly Queen Elizabeth’s favourite child) have long denied the many accusations made against him. The British press hasn’t been ignoring this story in the week or so since Epstein was arrested, but the headlines haven’t exactly been packed with it. That’s proven very weird for many royal watchers. Why the hell aren’t the media covering the extensive allegations of a member of the royal family - a prominent one who used to play a major role in fostering international business relations for the British government - and the then-underage woman allegedly forced to have sex with him? Surely this is suspicious as all hell, right?

So, remember when those rumours started swirling about Prince William having had an affair with one of Kate Middleton’s best friends? Remember how the British press refused to touch that story and the rumours swirled that the House of Cambridge’s spin team were feeding anti-Meghan stories to the press to keep them off their backs? Obviously, we never really got to the bottom of that story and all of this is speculation on our part, but it’s not hard to see why people are looking at this latest round of Meghan bashing and wondering what the real problem is.

Prince Andrew isn’t massively popular these days but he used to be extremely popular with the public. In many ways, he was the original Harry, the younger more dashing brother of the heir who had a debonair reputation and seemingly perfect balance between playboy and dutiful prince. For a while, he and Fergie were the cool young royal couple, not unlike Meghan and Harry but with WAY less press savvy (look up the toe sucking story… actually, don’t look it up). But Andrew’s reputation has soured a lot over the years. He’s been accused of exploiting his position for financial gain, he’s put his foot in it more than once while serving as a trade envoy, and in one infamous instance, was accused of abusing his position to nurture ‘friendships’ and broker deals with some shady Kazakhstan officials. A former minister, Labour MP Chris Bryant, said of his time serving in the Foreign Office, ‘it was very difficult to see in whose interests he [the Duke] was acting. He doesn’t exactly add lustre to the Royal diadem.’ There were calls for a public inquiry but nothing really happened. Andrew now does bog-standard royal duties, paid for by the British public and with all the protections therein.

This is not a confirmation of anything on my part, and I want to be firm in my words here. The British press haven’t made a secret of how much they dislike Meghan, especially as she has tried to keep her son’s life private. They don’t need secret deals or story swaps to write endless screeds against her. There are also other issues keeping the press from digging further into the Epstein story, most notably the much stricter libel laws we have here, plus a desire to not piss off The Firm and the access they provide. But whatever the reason, it is at best sloppy journalism that we haven’t seen more attention brought onto a literal Prince’s alleged involvement in a sex trafficking ring and friendship with a man who owns a place nicknamed ‘Pedophile Island.’