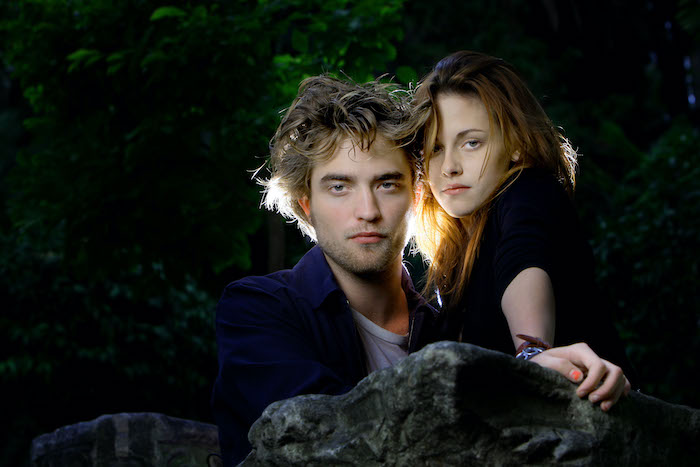 Friends, I’ve been re-watching the Twilight saga for the umpteenth time, because when the world is falling apart around you, a truly unhinged story about a teenager who just wants to bone her boyfriend and become a vampire (and why can’t the teenage werewolves and the freaky deaky vampire cult just respect that?!) is just what the doctor ordered. Trust me on this, I encourage you to seek these movies out because they prove what Robert Pattinson said recently—he’s always done weird movies, and Twilight is no exception.

‘Even before Twilight, I was doing weird stuff. And to be honest, I always thought Twilight was pretty weird. It’s really just the kind of marketing that made it mainstream. If you look at any interview I did, I would be pushing the chewing through placenta, any element which I could make gross, like I’d push and push and push it to the front. But you know you can’t compete with one guy against the whole marketing department going, ‘It’s a romantic odyssey, it’s beautiful.’ It’s like, ‘No, it’s disgusting [laughs].’

R. Patz is dead on here. Friends, I know I talk about Twilight a lot on this site, mainly because I really, really enjoy the movies, but also, I have a mission to sell people on it because it’s so enjoyable and entertaining and mind-numbingly dumb in the best way if you can get past the way it was marketed when it first came out. It’s not so much a love story as it is a beautiful symphony of WTF and “did that really just happen?!” and I love the movies so dearly for that.

Let me explain the character arc that Edward, R.Paz’s character, goes through in the 5 movies: He starts out a sexually frustrated 100+-year-old vampire who is perennially stuck going to high school, which is enough to drive you bananas, but also, his human girlfriend smells so good to him at all times he’s literally trying not to kill her every time they hang out and not bone. At one point he asks this freaky deaky vampire cult to kill him because he doesn’t like to check his email to find out his ex-girlfriend isn’t dead after his weirdo vampire sister had a vision she (the ex) might have jumped off a cliff just because, but that doesn’t happen. Another movie passes where he fights a real bitch of a vampire alongside some werewolves, and eventually, he gets laid (!!!!) but only after saving himself for marriage, which I never understood because vampires live forever so why would you want to get tied down?! Anyway, the movie ends with Edward no longer being sexually frustrated but experiencing exactly no other character growth whatsoever except that his human girlfriend is now his vampire wife, so he no longer wants to kill her all the time. Oh, yes, and at one point, he delivers his half-vampire baby via cesarean with his teeth because why not? Stranger things have happened.

R. Patz plays Edward exactly how I describe his character above. He really leans into the whole “Edward wants to kill his girlfriend” a lot aspect of the vampire/human relationship. One of my favorite scenes in the first movie is when he’s barely hiding his disgust at having to sit next to her but in theory, we don’t know why yet, so all we know is that he’s an asshole being a real asshole to our heroine.

It’s SO good, isn’t it?! (Bonus point if you noticed that the Science teacher is the DEA agent who gets shot in Con Air! The actor’s name is José Zúñiga, and I have to give him respect for being in two of my favorites movies of all time.)

Then, there’s this iconic (to me at least) line, which is so f*cking weird and taken directly from the book!

Not weird enough for you? How about just playing baseball in a thunderstorm like it’s a totally normal thing to do? Also, look at how bad their baseball technique is. They’re super old, they never bothered to learn how to play?!

Look, those are just three weird scenes from the first movie—there are four other movies which are equally f*cking insane. Like this random part, which I will provide no context to, but please, watch it (for me?):

Yes, that was a teenage dude just stripping off his clothes in front of his friend’s dad with no explanation whatsoever, to prove he’s a werewolf, but also? There’re better ways to go about that, surely. This exemplifies what I love so much about these movies—everything is patently absurd, and no one ever, ever, winks to the audience to let us know they’re in on the joke. It’s played so straight, and so serious, and it makes the movies all the better because of it. Bless that decision, it was the right call.

I can’t leave a discussion of Twilight without calling attention to the freaky deaky vampire cult who look like they would be very happy at an Anne Rice-themed party, or in a The Cure cover band:

Why does that guy (my favorite member of the cult) talk like he’s a constipated ghost? I don’t know! The answer is because these movies are really, really weird, probably.

Then there’s the lead freaky deaky vampire’s laugh because somehow that’s become its own thing:

The point is, Robert Pattinson is right. The Twilight movies are weird in the best possible way and I can only encourage you to give them a viewing during the shut down the world is experiencing. It may just help you take your mind off of things, or in the very least, give you ample opportunity to wonder how the f*ck a werewolf falls in love with a newborn baby, because yes, that happens in the 4th movie, so you have a lot to look forward to.

I’ll let R.Patz have the last word, here, on how he sees Edward. It’s definitely worth your time, because he clearly hates the character and it shows, much to my (and I hope, your) delight:

← Uplifting News You May Have Missed Amid All Of The Panic | Update: A Week After Diagnosis, Tom Hanks Has the Blahs →