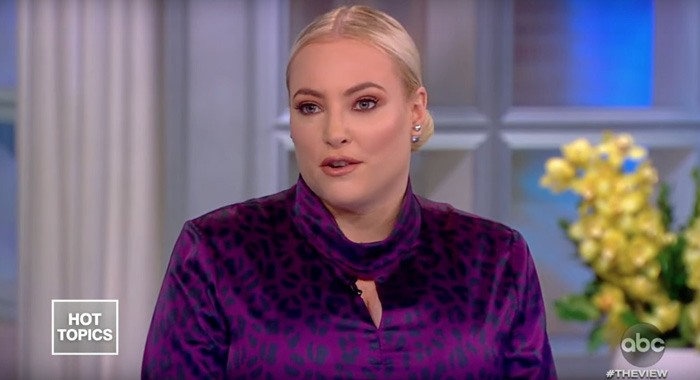 I know the headline here is “Grape Cheetah Impersonates Beer Heiress on Live TV,” but once again, I find myself in the terrifying position of… agreeing with Meghan McCain? I don’t recall switching medications. Should I see somebody?

Anyway, because Donald Trump is in control of the federal government and Republicans have given him the green light to do all of the authoritarianism, Mike “Mother Boy” Pence is now in charge of the US coronavirus response, which ironically proves that God exists, but also that He hates us. Hates us real bad.

Now, you’ll probably be surprised to learn that being afraid to eat lunch with a woman who’s not your wife lest demons will fly out of her vagina isn’t exactly the sign of an authority on science. In fact, Pence holds a record for causing a massive HIV outbreak while governor of Indiana, which AOC responsibly pointed out on Twitter Wednesday night. I think the people of the United States deserve to know that the guy tasked with stopping the spread of the coronavirus is, academically speaking, butt-f**kingly dumb in the head on account of Bible larnin’.

As governor, Pence’s science denial contributed to one of the worst HIV outbreaks in Indiana’s history.

He is not a medical doctor. He is not a health expert. He is not qualified nor positioned in any way to protect our public health.
https://t.co/1jVY44p2HF

Remarkably, Meghan McCain shares the exact same stance as AOC despite the fact that there’s clearly no love lost between the two. Christ, Meghan hates socialism as much as any attempt to stop her from firing an AK-47 into a creek bed while shit-cronked on Jell-O shots. But even John McCain’s daughter isn’t willing to dive on a GOP grenade, which is practically her signature move. I honestly don’t know what else she does.

“In all seriousness, Mike Pence has a really bad record when it comes to health records,” McCain said. “In Indiana, he actually hurt HIV patients because he halted needle exchanges.”

“And it really impacted HIV outbreaks in Indiana, so I think for that reason alone, I think it’s really simple,” she continued. “Someone with a medical and, you know, virus background should be in charge of a potentially deadly and lethal virus and medical outbreak in the United States of America. Doesn’t seem like that much of a leap for me. I don’t think—I’m not comfortable with him in charge.”

This prompted the rest of the table to predictably pile on the veep and Trump administration for seemingly not taking the health crisis seriously, with liberal co-host Joy Behar referencing his past assertions on smoking, and co-host Sunny Hostin noting that the veep called global warming a “myth.”

I know what you’re thinking, talk more about the Grape Cheetah stuff wait, what stupid thing did the vice president say about smoking? I’m glad you asked!

During a congressional run, Lead Disease-ologist Mike Pence wrote an opinion on lung cancer that was chock full of artificial science and fiber. From the Indy Star:

“Despite the hysteria from the political class and the media, smoking doesn’t kill,” Pence wrote in an opinion piece posted on his congressional campaign website in March 2001.

“In fact, 2 out of every 3 smokers does not die from a smoking related illness and 9 out of ten smokers do not contract lung cancer,” Pence wrote. “This is not to say that smoking is good for you. News flash: smoking is not good for you.”

Oh yeah, that’s the guy I want in charge of making sure my kids don’t contract a deadly disease from touching every surface at Target the minute I turn my back. Slap that nard in a lab coat if you want to live.

Meanwhile, back at The View, Whoopi, Joy, and Sunny all agreed that they believe Trump is setting up Pence because he knows “there’s a cliff coming,” which honestly, gives Trump way too much credit because there’s no way he’s smart enough to come up with a plan like that. Sandwich a Filet-O-Fish between two Quarter Pounders? Maybe, if his fat rape fingers are up to it. Calculate the downfall of a political rival? Haha, no way in hell.

Meghan, on the other hand, didn’t want to politicize the outbreak, but in another rare move, she pivoted right back to calling the administration a barrel of morons.

Later on in the segment, McCain also told the audience that it was OK to have a “healthy sense of fear,” noting that other first-world countries were initiating quarantines and closing down schools.

“So I think telling everyone—the problem with Trump is, he’s like, ‘It’s fine! It’s fine!’ — it’s like, they’re quarantining their kids,” she concluded.

On a more serious note, if you’re asking me whether or not the coronavirus is overblown or a serious threat, please don’t do that. I’m just some moron on the internet. I’m also a father, and can’t remember a day in my life when someone in my house isn’t sick, so what’s one more virus? Bring that shit on.* We’ll watch Netflix.

(*Don’t actually bring that shit on. I just said that because I’m tired. So tired. Also, is this a rash?)