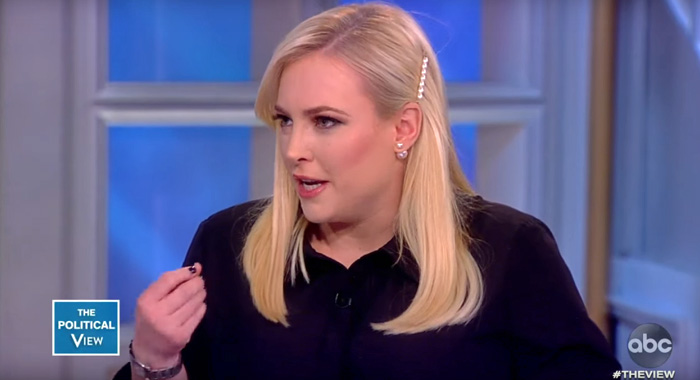 It’s been a very weird time in Meghan McCain. (Phrasing.)

For the past week, the human squawk box known as John McCain’s daughter has been on a relentless crusade against Mike Bloomberg, which is a stance I’m very much here for. It’s to the point where she’s joined forces with her once arch-nemesis Sunny Hostin, and frankly, I’m amazed the two don’t have matching BFF necklaces. Granted, there have been bumps in the road like when AOC stopped by The View on Wednesday, and in a display of Peak Mayo, Meghan said the two are a lot alike, which haha, no. Sorry. One of you is an elected United States congresswoman who’s an aspirational figure in the progressive community, and the other used her last name to get paid one million dollars a year to shriek pure nonsense in Joy Behar’s ear.

That said, as much as Meghan likes to rail against socialism, I’ve seen her have more contentious disputes with a coffee mug. And the one time things got a little heated with AOC, it was over Bernie Bros which — *looks around* — are a toxic albatross around Bernie Sanders’ neck. I don’t want to agree with Meghan McCain, but my hands are tied behind my back with a snake meme here.

Anyway, “Meghan Isn’t A Total Trash Fire Week” continued on Thursday when professional DUI arrestee Matt Gaetz was somehow invited onto The View to defend Roger Stone? (WTF, ABC?) But the Chris O’Donnell clone that was left under a heat lamp too long, unfortunately, did more than that. He also tried to tell jokes. Big, stupid-ass jokes. Jesus Christ, were they bad.

“I do watch,” Gaetz insisted. “You guys make news every week.” Then came his first attempt at a joke. “I was just wondering if you were wearing black as a consequence of the death of the political left in the debate last night,” he said to near silence from the crowd and co-hosts. “It was quite something to observe.”

When Behar pushed back, Gaetz added, “Well, Joe Biden at least. I was hoping that maybe Whoopi’s bell could wake up the Biden campaign.”

Whoopi Goldberg just glared at him.

Shockingly, things only got dumber the more Gaetz opened his face, and when he repeatedly turned to Meghan for help, somehow, against all odds, she was smart enough to leave him out to dry. Eventually, Meghan tossed Gaetz a small bone, but she might as well have handed him a loaded gun because he sure as hell shot himself in the foot.

As a “hardcore conservative” who’s “not a Trumper,” she wanted Gaetz to speak to the “character issues” that could prevent college-educated conservative women from sticking with the president in 2020.

But instead of mounting a defense of Trump, Gaetz fell flat on his face. “Well, look, if cheating on your wife is a disqualification to be president, then y’all probably should have impeached Bill Clinton,” he said.

When Behar and Goldberg simultaneously reminded him that “they did,” Gaetz stammered, “but not with all of you waving any pompoms.”

“I’m sorry, I don’t know what that means,” Goldberg said.

“It means nothing,” Behar helpfully explained.

Do I … not hate Meghan McCain now? Is this what centrism feels like?! I NEED A HUG.

← 5 Shows After Dark: 'Fresh Off the Boat' Series Finale, 'Dynasty' on The CW | Chris Pratt Shares the 'Crazy' Story of a Couple Found Completely Preserved in Ice →