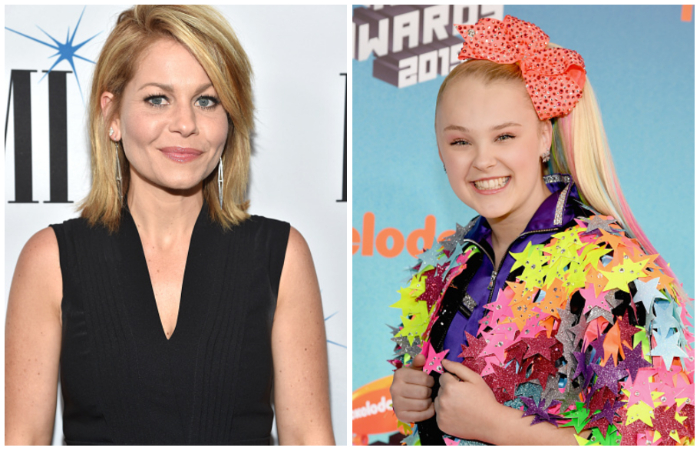 JoJo Siwa and 'Rude' Candace Cameron's Feud Is Over, Was Dumb

The other day, without providing any context for her answer whatsoever, JoJo Siwa said that Candace Cameron Bure was the “rudest” celebrity she ever met. There’s a lot going on in the world right now — heatwaves, a war in Ukraine, arguments about whether we’re actually in a recession — but Joe Rogan hasn’t said anything to piss anyone off in a week, and Elon Musk hasn’t slept with anyone he shouldn’t in like 3 days, and Ben Affleck hasn’t fallen asleep on a yacht since this weekend; things are slow in the celebrity world. So, when JoJo Siwa called the star of Full House “rude,” it went viral.

Hell, even Mike mentioned it in Pajiba Love, so don’t put this all on me! It’s the dog days of summer, folks. There’s a COVID case in my house, and I’m bouncing between isolation rooms and sleeping in a mask. Do you think I want to be writing about JoJo Siwa and Candace Cameron? We play the hand we’re dealt! And you’re here, aren’t you? Reading this celebrity slop. Don’t judge me! You’re complicit, and most of you probably barely even know who JoJo Siwa is (former Dance Moms cast member turned YouTube star turned So You Think You Can Dance judge; very colorful; her life is basically a billboard ad, but she’s also kind of cool, and it was a big deal when she came out as queer a couple of years ago because not a lot of kids in her very young fanbase have LGBTQ+ role models, even if this particular role model is basically a human commercial for Target).

The point is, she called Candace Cameron “rude” and since JoJo Siwa and Candace Cameron appeal to similar age brackets, this was a big deal. I suspect most of us assumed that Candace Cameron’s religiosity was behind the comment. Unfortunately, it wasn’t that interesting, and that “feud” has since been squashed after Cameron apologized to Siwa, who was initially reluctant to even tell Cameron what it was all about because “it was silly.” She’s right. It was silly.

“Then she said, ‘You know, I met you at the Fuller House premiere and I was 11 years old,” Cameron said, recounting their conversation. “And we were all on the red carpet and I had come up to you and I said, ‘Can I have a picture with you?’ and you said to me, ‘Not right now,’ and then you proceeded to do what you were doing and take pictures with other people on the red carpet.’”

She told JoJo in response, “I kind of broke your 11-year-old heart. I didn’t take a picture with you. Ugh! I feel crummy, I feel—JoJo, I’m so sorry.”

According to Candace, JoJo said, “I get it now as an adult when you’re on the red carpet and everything’s happening and you’re being pulled in different directions, but, at the time, I was 11.”

See, I told you it was dumb, but you clicked anyway, didn’t you? Now, who is judging who?