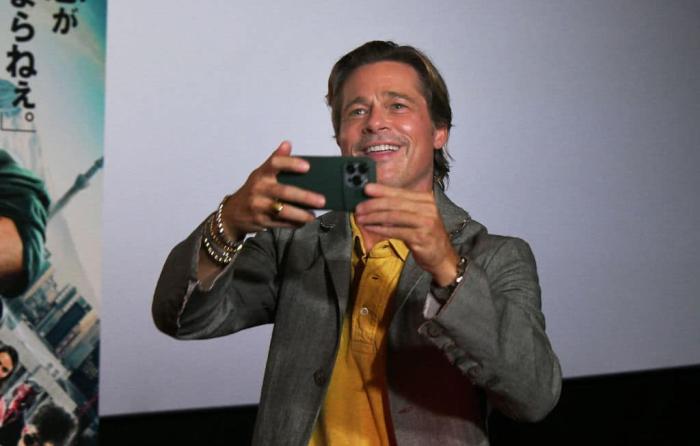 For a long time now, we have known that something bad happened between Brad Pitt and Angelina Jolie. We may not have known the full extent of what led a former Hollywood golden couple to divorce with such animosity, but we knew it couldn’t have been good. Slowly, it emerged that Pitt had allegedly laid his hands not only on Jolie but one of their children. Now, it has emerged that he allegedly ‘grabbed Jolie by the head and shook her, and then grabbed her shoulders and shook her again before pushing her into the bathroom wall.’ He is also accused of having ‘choked one of the children and struck another in the face.’ The FBI report on this incident notes that there was enough probable cause to charge Pitt for the abuse, but criminal charges were not pursued at the time, in part because the FBI wasn’t certain that Jolie was supportive of the charges.

Again, we knew that Pitt had allegedly abused Jolie and at least one of his kids. The full extent of the allegations remains shocking but not surprising to those who paid attention. It’s been the elephant in the room all year as Pitt has embarked on a PR campaign of self-serving egomania that rivals anything accomplished by Johnny Depp or Harvey Weinstein.

Pitt launched into his publicity clean-up almost as soon as he and Jolie split. It clearly worked. After giving plenty of interviews where he positioned himself as a former drunk who hit rock bottom but beat his demons, he went to work with big-name directors and had his name attached to a number of glossy projects that bolstered his reputation as a hot producer. He won Best Supporting Actor for his performance in Once Upon a Time in Hollywood and turned his awards season into a showy parade of quippy speeches that seemed to have been written by a room full of Sorkin devotees. It served to position him as an industry darling, a true man of Hollywood, in sharp contrast to Jolie, who has always kept to the sidelines of the business and devoted herself more to humanitarian work. It barely seemed to register to many that Pitt’s children hadn’t been seen in public with him since the split.

The extensive press tour for Pitt’s newest film, Bullet Train, was an opportunity for him to throw himself into the spotlight as a new man. Now he was ‘artistic,’ the kind of charmer who, gasp, wore skirts on the red carpet and seemed game for anything. He seemed looser, more fun, less embroiled in his own image as a serious artiste that he’s tried to cultivate for years. Sure, he’s still doing stuff like showing his not-great artwork at galleries and bigging himself up as some sort of special student of architecture, but on the red carpet, he was pushing shenanigans. Look, he’s in a skirt. How novel!

The crowning moment of this tour was the already infamous GQ profile, written, for some reason, by the author Ottessa Moshfegh. The entire piece is bizarre, an overwritten puffball of pretension that feels as though the writer had to complete it under duress. Accompanied by a consciously artsy photoshoot with a cover image designed to evoke the drowning of Ophelia, the profile is, to put it bluntly, pretentious as f**k. Pitt talks about wanting to be ‘authentic’ and being ‘one of those creatures that speaks through art.’ It’s the creation of a creative Sad Boy, a 50-something Harry Styles without the pop fun or stylistic consistency. This isn’t designed just to make him more sympathetic: it’s crafted to make him seem Important, a true artist whose creative drive cannot be quenched. It’s at least easier to push than him being an activist, especially after his absolute c**k-up over plans for housing in New Orleans. He talks a lot about himself, a contrast to Jolie, whose profiles see her working overtime to bring focus to the causes she cares about.

Pitt also worked overtime to make himself seem like the perfect ex and best friend. We saw how he spent a lot of time eagerly trying to cozy up to Jennifer Aniston and now he’s made Gwyneth Paltrow his accomplice. He named her as an inspiration for his inexplicable skincare line and gave slobbering interviews describing how they still loved one another very much. It was hard not to draw contrasts with Jolie, who has always kept to herself and not paraded her friendships through the tabloids. The media has loved to strengthen this image of Jolie as a kind of loner, an outsider who sees herself as not with the Hollywood crowd. That’s not exactly true. We know she has long-term friendships with non-famous people as well as those in the world of humanitarianism. The privacy with which she guards her personal life makes it easy for, say, the ex-husband to go into overdrive to portray himself as the ideal opposite. Look at how many people love him. Not like her, right?

These are classic isolation tactics. It’s not enough to make yourself look good. You must make the other person seem utterly toxic. A lot of this can be seen through how sympathetic Pitt publications talk about his relationship with his children. Again, Pitt has not been photographed in public with any of his six kids since the split, even though they are frequently photographed with Jolie at events and key private moments, such as when Zahara went to college. TMZ is reporting that Jolie has ‘poisoned’ the children against Pitt, which is curious given that, during the Bullet Train promotions, ‘sources’ claimed that Pitt regularly had private dinners with his kids and that he ‘has a pretty good relationship with them.’ Which one is it, Brad?

One of the ways that Harvey Weinstein was able to accrue so much power was because he was seen as the undisputed king of the Oscar campaign. For most of the ’90s, to be in a Miramax film was to be a future Academy Award winner in the making. His tactics were those of a bully and everyone knew it, yet for all of the hub-bub about him not ‘playing fair’ that surrounded each season, plenty of people stayed silent because they hoped to receive the Weinstein campaign themselves. There’s a reason the full slate of allegations against him didn’t emerge until he was in a professional slump.

Pitt, right now, is not at a career low. He just had a solid box office hit, launched a skincare line with blindly glowing write-ups in places like Vogue, and is a credited producer on multiple releases. Many of those films — Women Talking, Blonde — are stories about women in distress, victims of systemic abuse. The most notable of the 2022 bunch is She Said, the dramatization of the Weinstein investigation by the New York Times. It’s almost beyond parody that a man accused of abusing his wife and children would cloak himself in the role of professional ally by producing a film about an abuser who he worked with several times.

It’s also up to people in my field to call bullsh*t. The trade presses shouldn’t be willing to give into publicists’ unreasonable demands. Is it really worth losing a glossy interview or two? Must the ceaselessly bad-faith of ‘cancel culture’ rear its ugly head for yet another unnecessary think-piece when some talking-head wants to defend abusers without saying the quiet bit out loud? In an industry dependent on access, perhaps we can be okay with not getting to cuddle up to millionaires once in a while. And that doesn’t even get into the willingness of places like People and Us Weekly to welcome ‘sources’ from Pitt’s camp as part of his rehabilitation campaign.

But Pitt’s most effective weapon isn’t a well-paid publicist or flock of big-name BFFs. It’s just good old-fashioned patriarchy. You won’t have to spend much time on social media before you find an assembly line of tweets declaring Angelina Jolie to be a liar, a whore, a gold-digger, a bad mother, or the next Amber Heard. TMZ, the vilest gossip site on the planet and long-time safe space for sh*tty men accused of abuse, has already started the anti-Jolie rhetoric. The site’s reputation for accuracy has long been questionable but they’re a big enough name to command attention and do so quickly, especially on social media. Combine that with plenty of headlines from more reputable publications all pushing the same angle to varying degrees of ferocity - Brad Good, Angelina Bad - and the agenda is clear. It barely matters that TMZ, for instance, has a long and sordid history of misogyny and victim-blaming. For those in need of ammo, they’re happy to provide it.

I’m not sure we’ve ever lived in an age where there hasn’t been a robust opposition to the vaguest possibility of feminism but it certainly feels like the ‘#MeToo backlash’ is in full swing right now. We’ve been so cruelly reminded that there is no such thing as a credible victim to vast swaths of the population. A woman’s word (and that of an FBI report) isn’t enough, nor is that of her children. Jolie has long been public enemy number one for a subset of the general public, the ones who still call themselves Team Jennifer despite the breakup occurring well over 15 years ago. Despite being a multi-award-winning actress and director, a celebrated humanitarian, and mother of six, to some, Jolie will always be ‘the homewrecker,’ the acceptable target of slut-shaming. That never went away for a hell of a lot of people, and now, they’re happily taken up arms against her because there’s enough media furore to encourage them.

A good PR clean-up seeks to rob the viewer of context. What all of the TMZ and Page Six noise overlooks is that Jolie’s allegations of abuse are part of a counterclaim in response to Pitt suing her over the same of her share in the winery Chateau Miraval. HE brought all of this to light. HE’s the one dragging his ex through the courts. HE’s the one who wanted Jolie to sign an NDA which would have prevented her from discussing what happened on that plane.

And he has a lot he needs to clean up. He needs to whitewash the press in time for his new movie, which has been hyped for Oscar buzz for months, as well as the numerous acclaimed dramas he’s put his name to as a producer. I wonder if his team sees the sheer unbearable irony in having to smear an alleged victim of domestic abuse in order to promote a film about women uncovering systemic violence from a powerful Hollywood player. Then again, this is not an industry defined by any sense of self-awareness. So, will those around Pitt play wilful ignorance as the year goes on? Will Carey Mulligan and Zoe Kazan be forced to say ‘no comment’ when asked about Pitt? Will his co-producers have anything to say while on the promotional trail? Will the entertainment press call out the allegations and FBI statements, or will they keep their mouths shut in the hope of being able to get a few softball questions out of Pitt for a cover piece?

Pitt is playing from a well-worn handbook, a deeply effective one that has only grown more powerful as the furious hatred towards those who speak out against abuse gains a worldwide foothold. Of course, it’s also not that tough to get people to hate women. I’m sure Pitt knows that.