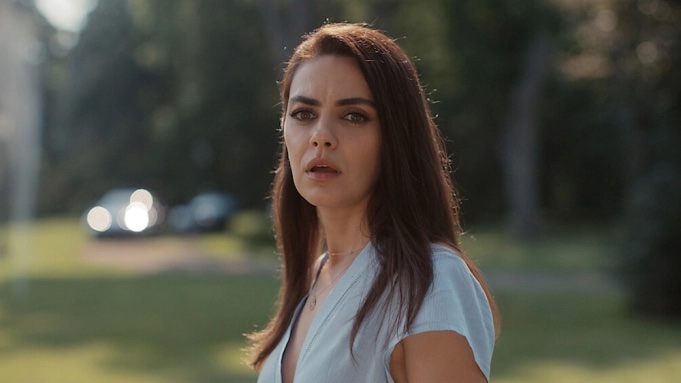 Based on Jessica Knoll’s New York Times bestselling novel, Luckiest Girl Alive is an introspective look at the process of grappling with trauma. Sticking to the novel’s first-person narrative style with the use of narration, it feels like a personal story. Knoll is a rape survivor who wrote her experience into the novel. In the film, Ani (played by Mila Kunis) is in an uphill battle to find the strength to tell her own story. Ani is both a survivor of sexual assault and a school shooting. These are two difficult subjects too many, but the script fails to tackle them successfully. Mike Barker’s direction is heavy-handed and fails to unpack the film’s subject matter with delicacy, showing both sexual assault and a school shooting in unnecessarily graphic detail. There seems to be more interest in shock value than really diving into the many ways trauma manifests itself and the effect it can have on ourselves and our relationships, but the benefit of the doubt can point fingers at the limitations of runtime.

Luckiest Girl Alive’s opening scene finds just that. Ani is about to marry her wealthy fiancee Luke (​​Finn Wittrock) and they’re both in pre-wedding bliss as they pick out items for their registry. While looking at cutlery, Ani holds two knives in her hands. Suddenly, the tone changes as their tips turn bloody and Luke is lying dead on the ground. Imagery like this immediately puts into question who Ani really is under her perfectly crafted exterior. Kunis’s narration makes it apparent that unbridled ambition allowed her to completely transform. She’s a writer at a women’s magazine with an opportunity at the New York Times in sight. She’s the kind of woman whose confidence makes heads turn. This projection is just an elaborate performance; this perfect life is a bulletproof vest. What she’s protecting herself from is a past that’s marked by a deadly school shooting. It’s a story that has a true crime documentary filmmaker (played by Dalmar Abuzeid) knocking on her door, forcing her to confront what she’s tried so hard to subdue under designer heels. She has many questions left to answer, namely, if she was involved in the shooting. Her story of being a hero or a villain has been crafted by others, but her built-up rage from that experience, as well as a sexual assault, tips her to a breaking point and she has to decide if this perfect life is worth keeping if it means hiding her truth.

There’s a lot of story here, especially with many scenes taking place in Ani’s high school years. A two-hour runtime isn’t enough breathing room to fully explore the film’s many storylines. A miniseries would have been much more effective in adapting a novel that touches on many important subjects that need the appropriate rumination. A miniseries would have also allowed a deeper exploration of the relationships in Ani’s life. There are a lot of complexities there, especially with regard to her mother (played by Connie Britton) and her husband-to-be, and the film only scratches the surface.

The film is effective, however, when looked at as a character-driven piece. While it’s way too condensed to take the time needed to wholly unpack Ani’s trauma, she’s still given the most care. She turns out to be a fascinating character. At first, she comes off as unlikable as her narration reeks of privilege and self-importance. But when the film takes us back to teenage Ani navigating the high school experience as a low-income student on a scholarship surrounded by students with pedigree, you understand why wealth becomes so important to her. When you hear the critical comments her mother would make about her appearance or her victim-shaming, you understand why her appearance is as fake as her semblance of moving on. Ani says it was because she was a “gutter rat” that she wasn’t believed about not being involved in the shooting. In her world, and sadly in our own, wealth and success carry weight and it took years for her to craft a life that would make her confident enough to tell her truth. While it takes a bit of getting used to, her narration turns out to be an excellent tool in digging deeper into her psyche and how her interior thoughts and exterior comportment contradict.

Kunis gives a commanding performance, staying composed despite her character’s PTSD. It’s a very introspective role, one that requires an actress that can convey the anger present in Ani’s narration on her face in the most subtle way while still acting calm. It’s a balance that Kunis strikes with ease. Her performance is also affecting and poignant, especially in her forceful delivery in later scenes.

Luckiest Girl Alive blurs the lines between hero, victim, and villain in its story about a woman who goes through a journey of re-discovery and learning to embrace who she really is, no matter what that means for her future. It’s a film that will be resonant with many people, but while the story isn’t told in the most successful way, it does manage to deliver an emotional impact.


← How Brad Pitt is Trying to Spin His Way Out of Abuse Allegations | Molly Kearney, 'The Try Guys,' and Sarah Sherman Crush It on the Brendan Gleeson Hosted 'SNL' →