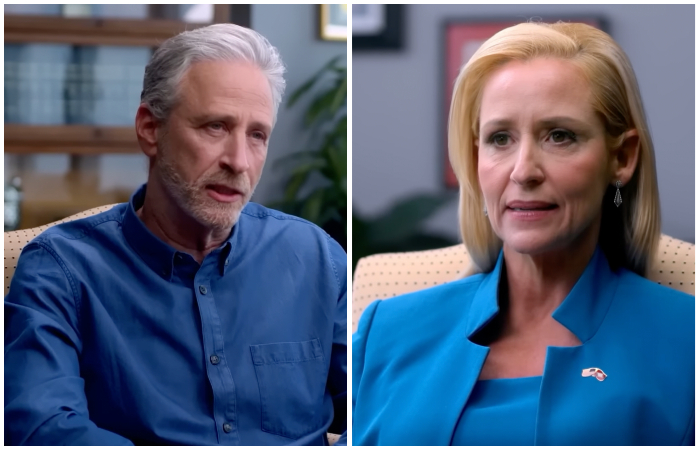 Jon Stewart has made what he calls “sh*tty and reductive” transphobic jokes in the past, but in this week’s second season premiere of The Problem with Jon Stewart, he both apologized for those jokes and atoned for them by directly confronting transphobic Arkansas Attorney General Leslie Rutledge.

Rutledge has fought — and so far failed — to enforce a ban in Arkansas on gender-affirming care for trans kids, citing junk medical science. (Rutledge has also fought to prevent trans-kids from competing in athletics, although she cannot name a single trans athlete in the state). I’m from Arkansas; I went to the same college at the same time as Rutledge; and I have no idea why she thought it was a good idea to go head-to-head with Jon Stewart over this issue. She repeatedly says that she is unprepared to provide the evidence to back her claims, despite the fact that she agreed to the interview and she’s arguing this issue in front of the 8th Circuit Court of Appeals.

It’s not an “explosive” interview. Stewart does not yell, get heated, or resort to jokes. He picks Rutledge apart and leaves her looking very small. It’s a great interview, but I suspect Stewart may soon find it difficult to find other politicians willing to sit across from him.

The Problem with Jon Stewart can be found on Apple+ TV, and his last couple of podcasts have been really insightful, as well, tackling the polarization in Congress and Iran’s fight for freedom.


← T.J. Miller Trash Talks Ryan Reynolds: 'He Deluded ... He's Insecure ... He Hates Me' | How Brad Pitt is Trying to Spin His Way Out of Abuse Allegations →