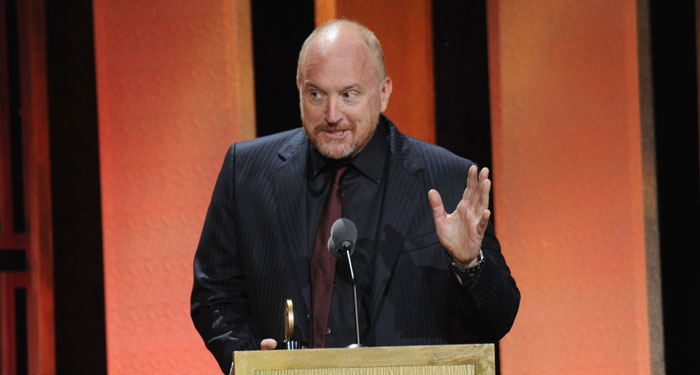 EW reports C.K. revived the use of his fan mailing list, e-mailing subscribers to the announcement of a 14-city international tour that will kick off this Saturday in Richmond, Virginia. The email directed fans to the comedian’s website, where he announced tour dates and declares, “I am on the road doing professional stand-up comedy. Which consists of sharing jokes, stories, observations, lies, non-lies, and being generally ridiculous for the benefit of a laughing audience.”

He makes no mention of the five women who came forward about his serial sexual misconduct. The e-mail does promise C.K.’s website will soon be back online with “new” products. Some are speculating this might mean C.K. has wrested the distribution rights to I Love You, Daddy back from The Orchard. If so, fans who seek to defend the comedian against his own admitted crimes can finally see the film where he offers a thinly veiled apologism for Woody Allen’s alleged sex crimes.

Circling back to cancel culture, let’s take a look at where the supposedly canceled creeps are right now.

Alleged sexual harasser Casey Affleck made a movie about a world without women.

Alleged child molester Woody Allen, who says he should be the “poster boy” for Me Too, saw his last film, A Rainy Day In New York, lose distribution. He is currently making another.

Admitted child rapist Roman Polanski suggested he was a victim of the Me Too movement while promoting his latest film, which premiered at the Venice International Film Festival. He’s currently suing to get back into the Academy of Motion Pictures and Sciences.

Fired for serial sexual misconduct, Matt Lauer has not begun a comeback yet, but was back in the news calling his latest accuser a liar when she offered a detailed account of his alleged rape in Ronan Farrow’s new book.

Alleged serial rapist and sexual harasser Harvey Weinstein is not in prison. He’s been turning up at comedy shows in New York City, where he’s been heckled and screamed at, which earned those who spoke out boos or getting booted.

Admitted sexual predator Louis C.K. did lose gigs, including the central voice role in The Secret Life of Pets franchise and the shuttering of in-development shows. His movie was canceled weeks ahead of its scheduled release, as was a Netflix comedy special. And his management dumped him. Now, he’s coming back trying to resurrect his career by leaning into the audience who didn’t leave him, those who defend him under the “it’s not like he raped anyone” defense and right-wing assholes who feel PC culture and SJWs are making the world unsafe for straight white men who do whatever they want without fear of consequences.

His is not the case of a popular male celebrity who allegedly committed sexual misconduct. There is no question of guilt here. C.K. admitted to it. His apology was poor, having more to do with his ego than showing remorse. And then he went away for six months. He’s made no apparent efforts to change his behavior in that time, yet you’ll see defenders on social media insisting he deserves a second chance. This ignores that CK had a second chance every time a woman he subjected to his masturbation stunt reacted negatively. Remember one instance almost got a show shut down. He’s had second chances, thirds, and fourths. And now, with this tour, he’ll be back in the settings where he wields the power and influence that allowed him to make comedy clubs a hunting terrain for his next victim.

With this tour, a line will be drawn. Whoever buys a ticket is saying clearly that they care more about their desire to laugh with Louis C.K. than they do the safety of women in comedy. Beyond that, his tour will reignite the conversation around him, which means any female comedian in an interview from now to the end of this tour could be asked what she thinks. That means female comedians will be pressured to choose a side that could potentially hurt their reputations with bookers and C.K.’s many, many friends in the industry. Behold! It’s another way C.K. can continue to silence women, while he spins jokes about how men are terrible, lusty cretins. Woe is men.

Here is the email: 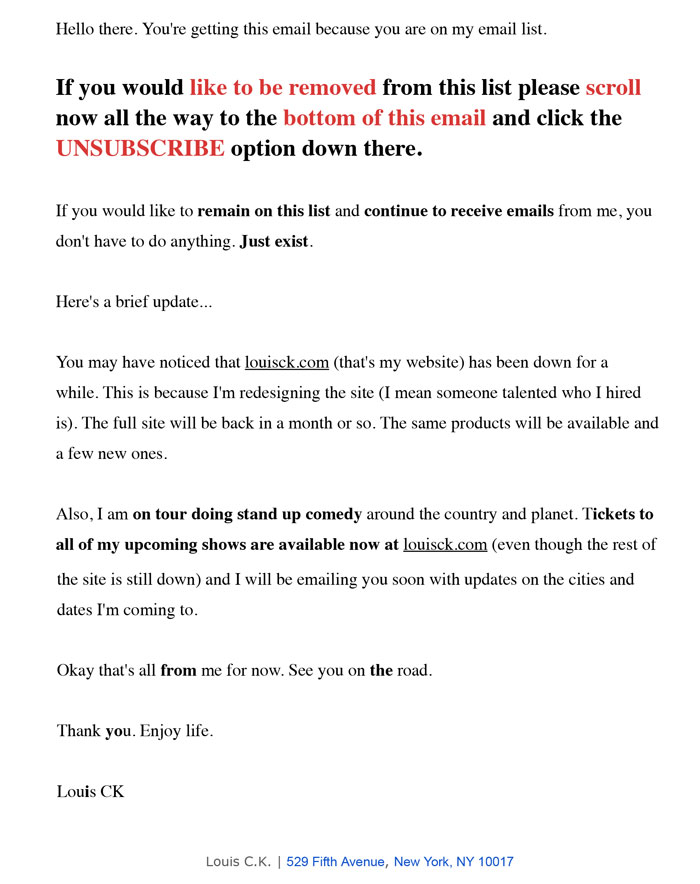