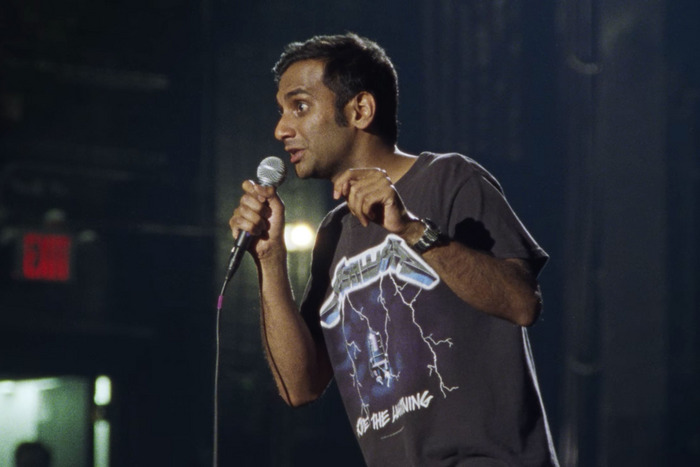 Review: In His Netflix Special, Aziz Ansari's Perfectly Addresses Me Too Allegations. It's Almost Too Perfect

I saw Aziz Ansari perform back in October while he was workshopping the show that would eventually become his stand-up special, Right Now, released on Netflix this week. It’s so much more fascinating than I expected to see where a show begins and where it ends up. When he came to Portland, he was wearing a bold leather jacket and boots, he was brash and confident, and he didn’t address the sexual misconduct allegations leveled against him, opting instead to steamroll over them with what felt like a very ill-suited rock-star persona.

What’s remarkable is that, though many of the same jokes were used and Ansari addressed the same themes, the show that made it to Netflix is completely different tonally. He arrives in jeans and a Metallica T-shirt raw and vulnerable, and he speaks softly — in almost whispers — through much of the special, eschewing all of the cockiness he brought to my hometown. The material was similar, but it was a completely different show.

In fact, in his Netflix special, he comes out onstage and immediately addresses the sexual misconduct allegations. He says all the right things in the exact right tone. “There’s times I felt scared,” he says. “There’s times I felt humiliated. There’s times I felt embarrassed. And ultimately I just felt terrible that this person felt this way.” Later in the show, he acknowledges that the allegations could have ended his career, and he expresses gratitude to his audience for giving him an opportunity to grow and learn from his mistakes.

It’s a little awkward and uncomfortable, but it’s necessary. Ansari removes the elephant from the room, and in doing so, he elevates the rest of his material. Much of the stand-up special takes aim at performative wokeness, and when I originally saw Ansari, the jokes felt like an attempt to paper over the misconduct allegations, to center the scandal on overreacting social media rather than on himself. By addressing the allegations head-on, however, he takes that subtext out of the equation, and it gives the material a lot more power (you can still debate about whether competitively woke white people are the right target in an era of more deserving targets).

But Ansari also brings a lot of poignancy to the special, alternating between bits about fake news and his Norwegian girlfriend’s obliviousness to racism with genuinely touching stories about his grandmother who has Alzheimer’s and a terrific bit about how we neglect to treat our parents as real people as they get older.

I don’t want to give any of it away, because it’s a terrific stand-up special, and it’s better to experience it than read about the jokes. It’s an almost perfect stand-up special to follow sexual misconduct allegations, the exact opposite of the angry, reactionary route that Louis C.K. has taken in his attempt at a comeback.

There is, however, a cynical part of me that thinks it’s almost too perfect. Having seen how the sausage is made, so to speak, I can’t help but wonder if Right Now is the product of months of focus testing. I completely understand why a comic would want to test comedic material out on the road, eliminating jokes that don’t work, fine-tuning his timing, and piecing together the perfect one-hour set. There’s something that feels slightly disingenuous, however, about focus-testing the more emotional beats of the show, and the way it allows someone several attempts to speak from the heart until his heart says the exact right words in the exact right way to elicit his audience’s forgiveness. Aziz Ansari has basically spent the last eight months workshopping his apology, beginning with no apology and working on it until he’d added in the perfect Hasan Minhaj joke (when I saw him, he used the Hasan Minhaj joke in another part of the show disconnected from sexual misconduct).

I’ll give him this much: He nails it. I’m not sure he could have delivered a better special for this moment. But when I think back on the Ansari I saw in October and the Ansari I saw in the Netflix special, I can’t help but wonder if he means what he says, or if this is just the version of the show that tested the best? Answering that will obviously be up to the individual viewer, but I am personally willing to overlook my own cynicism and applaud Ansari for getting it right, even if it took him 40 or 50 shows to fine tune his sincerity.