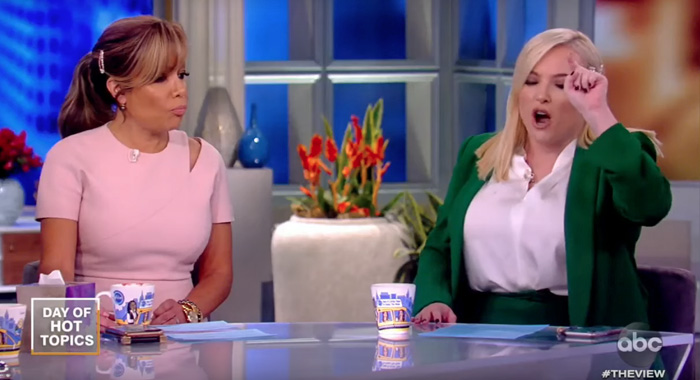 Despite reluctantly coming around to the fact that Donald Trump has floated a significant distance up Shit Creek after Bill Taylor’s damning testimony to Congress, Meghan McCain once again dove on a grenade for the Republican party’s champion. For those of you who missed the delicious righteousness at last night’s Washington Nationals game, Trump had his ass loudly booed followed by chants of “Lock him up!” after attempt to spike the football on U.S. forces putting down ISIS leader Abu Bakr al-Baghdadi “like a dog.” An impressive feat, considering Trump massively screwed the Kurds who had been working diligently to deliver him to American troops for months. Make no mistake, this win happened in spite of Trump, not because of him.

Anyway, nothing springs Republican boners like the military mowing down brown people, deservedly or not, so both Meghan and Abby Huntsman came to The View extra loaded on jingo sauce. Although, ironically, the MY FATHER McHUNT duo clashed almost right out of the gate when an uncharacteristically hyped-up Abby disagreed with critics bashing Trump for thanking Russia first during his announcement. Meghan, on the other hand, launched into a diatribe about how she loves the American flag so much that she eats red, white, and blue Jell-O shots all day then shits stars and stripes — Maybe not her exact words, but close enough. — so the first person Trump should’ve thanked is the TROOPS who “brought home our freedom.” Whatever the hell that means.

From there, the conversation turned to the Nationals game incident, where Meghan made a surprising turn into conspiracy town by accusing the crowd of being deep state plants before getting her ass handed to her by Whoopi. Via Raw Story:

“That’s in the middle of the Washington, D.C. swamp,” McCain said. “If he had been in, I don’t know, (an Arizona) Diamondbacks game, it might have been a different reaction.”

“Just look — I think people are pissed at him,” Goldberg said. “People are legitimately angry at him.”

Goldberg was in Washington, and she saw a diverse group of fans wearing Nationals jerseys headed to the ballpark.

“It was a whole bunch of folks — black, white, Latino, Asian,” she said. “It was just a whole bunch of people, and I think people just — they didn’t want to give him very much because, in a way, you’re all correct about what’s going on. People are annoyed with him.”

Sunny Hostin also chimed in, which I’m sure Meghan loved. (They hate each other if you’re just tuning in for the first time and aren’t already confused by the 8,000 running gags. I’m an incredible writer.)

Naturally, Sunny is correct. If you want to see the real swamp, it took a selfie with the president.

As for where the hell Meghan got her odd claim that the entire stadium was in on a deep state plot, it’s almost like she’s blatantly parroting her husband’s piece of shit website again, but that can’t be right. She’s an independent woman who can’t believe how gross it is that liberals bring up her marriage like the two share a brain now. How dare you? Via The Federalist:

Was it surprising that a DC-based crowd was booing the President? Absolutely not. After all, this is a President who built his entire campaign around ridiculing DC as “the swamp.” And in the 2016 election, only 4 percent of DC voters supported Trump.

You hate to see it.