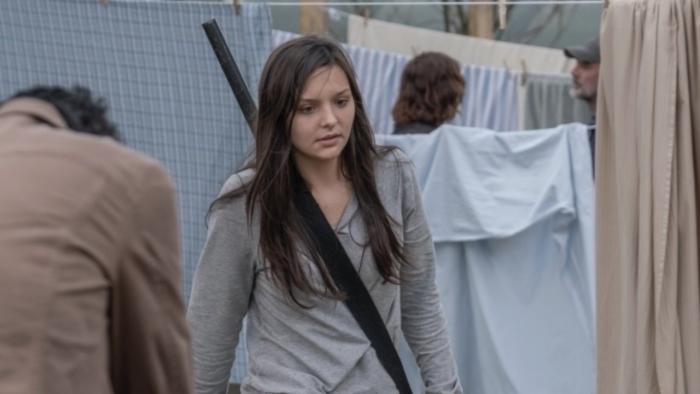 'The Walking Dead' Recap: Where Does [Spoiler] Go After His Escape?

Previously on The Walking Dead: After nearly two days of fighting off seemingly neverending waves of Walkers approaching their dooorstep, Daryl, Michonne, and company are called to a meeting with Alpha to discuss a violation of her rule to not cross into her borders. Carol, who has become dependent on pills to help her stay awake, has become even more hellbent on killing Alpha by any means necessary. Negan and Aaron are forced to rely on each other as they are ambushed by a group of Walkers while they are out on patrol. Rosita is forced to let Eugene know that she is not into him and that nothing is ever going to happen between the two of them.

THE STORY SO FAR: A gigantic tree crashes down on the gates The Hilltop, making it increasingly difficult to keep the Walkers from getting inside. Michonne and Ezekiel spend time bonding with each other as the latter is feeling distraught about everyone and everything he has lost. Despite her attempts to keep her head down and fit in, Lydia is bullied by some of the Alexandria residents, who still blame her for all the lives lost as a result of so many heads being severed and left on pikes. Because spray-painting “Silence The Whisperers” everywhere isn’t enough to get the point across, a few of them attack Lydia to scare her into leaving, which results in Negan stepping up to help her, only to end up accidentally killing one of them while beating their asses and with his life hanging in the balance as his punishment is decided by Aaron, Gabriel, and others. Before that decision is made, Negan disappears from his cell to parts unknown.

WHAT’S GOOD ABOUT THIS EPISODE?: Negan’s scenes opposite Daryl and Lydia. Michonne slowly realizing that Judith is much smarter and more observant than she originally thought, followed by the smile of pride on her face as she witnessed Judith taking down any approaching Walkers. Lydia making it clear to her bullies (in the form of disemboweling a squirrel right in front of them as they eat lunch and shushing them while doing so) that she refuses to take any of their shit, even if it means channeling Alpha to freak them out, as well as her conversation with Daryl in which she expresses her The Joker-in-[em]The Dark Knight[/em] belief that Daryl, Michonne, and everyone else in Alexandria are no different and that they are civilized people who can and will eat each other (figuratively speaking, at least) when times get rough. Michonne and Ezekiel not hooking up as we were led to believe, but still being there for each other when they need it most.

WHAT’S NOT SO GOOD ABOUT THIS EPISODE?: Negan escaping from his cell for the second time comes off as repetitive after the last time he took off, and unless something really impressive occurs this time around, I don’t see what reason there is for me to be impressed by this.

IS NEGAN IN THIS EPISODE?: Yes, he is. He has no regrets about killing someone who thought it was a good idea to attack a younger girl as a scare tactic, and much like he was with Judith, he’s clearly giving Lydia the advice, guidance, and attention she needs to help her get by.

MICHONNE?: Yes. And despite being caught off-guard by Ezekiel’s semi-impressive kiss while comforting him and talking him down from the edge, she knows that it would never really work out between the two of them, due to them being stubborn as well as both of them still being in love with the partners they miss most.

JUDITH?: Yes, and she gives some surprisingly solid advice to Michonne on how to handle dealing with the Whisperers.

IS DARYL STILL ALIVE? BECAUSE IF NOT, THEN WE’LL PROBABLY RIOT IF WE HAVE NOTHING BETTER TO DO: Yes. He’s still doing what he can to look after Lydia and keep her safe, and Michonne advises him that they both need to make sure she’s safe, as Alpha knowing that Lydia is alive and safe with her enemies is the only reason why she hasn’t attacked them all as mercilessly as she would likely prefer.

TO SUM IT ALL UP: A decent episode that wasn’t as impressive as the last three, so hopefully, seeing where Negan ends up and how he got there in the first place will be much better in comparison, especially since Jeffrey Dean Morgan tends to knock it out of the park when he’s given quality material to work with.

This episode of The Walking Dead has been brought to you by “Walls” by Tom Petty and the Heartbreakers.