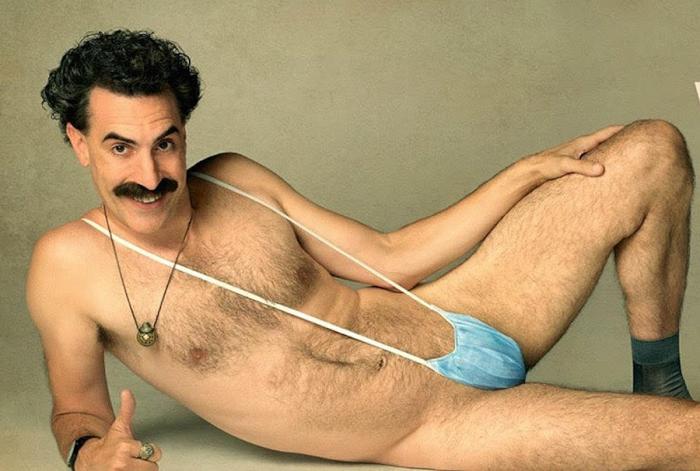 Sacha Baron Cohen kicked Donald Trump when he was down, and we’re here for it. But before we get to the scorching tweet that surely chapped the lame-duck president’s ass, let’s savor a bit of background.

The English comedian made a mockery of the Trump administration with his critically heralded sequel Borat Subsequent Moviefilm: Delivery of Prodigious Bribe to American Regime for Make Benefit Once Glorious Nation of Kazakhstan. The film not only mocked Trump stumpers for their COVID conspiracies, ignorance, and violent rhetoric, but also caught on tape Trump’s lawyer Rudy Guliani being real creepy with a female reporter. Then, the outtakes showed how easy it was for the Borat team to get access to Donald Jr. and the White House press room. From there, things got more ridiculous as Trump and his cronies tried to strike back.

Guliani tweeted at Borat as if he were a real person, not an outlandish fictional character. Trump bragged that he’d not been conned by the comedian, which just brought more attention to all those in his circle who had. Cohen relished it all, as each Republican reaction served as free advertising for his new movie, which hit Amazon Prime HOURS before the final presidential debate. Cohen even offered Trump a job.

All this played as the precursor to election day, where Donald Trump insisted his re-election was guaranteed. However, as the days passed, this putrid POTUS began to see his presumed grip on the electoral college slipping. Georgia, Pennsylvania, Nevada, and Arizona flipped blue. Joe Biden won. Then in came Cohen, adding salt to the wound of Trump’s defeat:

Donald—you’re out of work and I know I offered you a job.

But your performance this past week was tragic and sad.

The American people rose up and fired the talk show host turned national disgrace. Now, even a comedian Trump doesn’t find funny won’t offer him a job. What a difference 4,501,088 votes make.

Borat Subsequent Moviefilm: Delivery of Prodigious Bribe to American Regime for Make Benefit Once Glorious Nation of Kazakhstan is now on Prime Video.