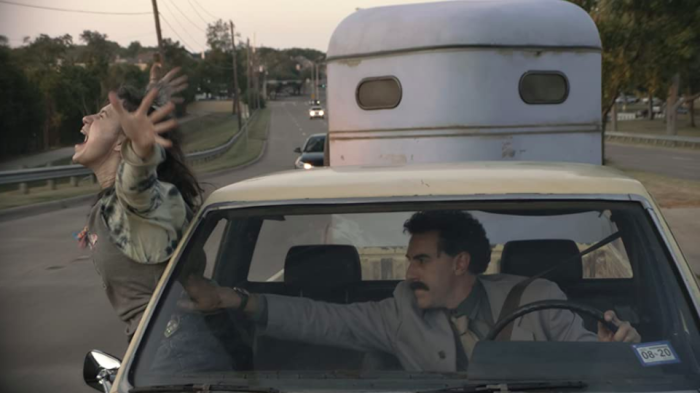 The FYC Campaign For 'Borat 2' Has Begun On Twitter

Last week, Borat Subsequent Moviefilm hit Amazon Prime. The first wave of reactions centered on how Sacha Baron Cohen’s prank-centric comedy has aged since the first film hit in 2006. The second wave—and the bigger one—was all about a spoiler climax, involving a major figure in the Trump Administration. The third hit this weekend, and it was all about Maria Bakalova.

In Borat Subsequent Moviefilm: Delivery of Prodigious Bribe to American Regime for Make Benefit Once Glorious Nation of Kazakhstan, Cohen shares the spotlight and role as interviewer/provocateur with Bakalova, who plays his daughter Tutar Sagdiyev. Unknown in the U.S., the Bulgarian actress was more easily able to slip into scenarios with major public figures—and apparently the White House—without being recognized, as Cohen might have. This gave Bakalova the incredible yet intimidating opportunity to tackle Cohen’s brand of madcap, satirizing improvisation in high-pressure scenarios. Some critics (Dustin and myself included) feel she went above and beyond, essentially stealing this movie from its star and creator. We’re not alone.

Once Borat 2 hit Amazon Prime, a grassroots For Your Consideration began on Twitter, declaring Bakalova should be given a shot at Oscar gold.

Spoilers below for Borat Subsequent Moviefilm: Delivery of Prodigious Bribe to American Regime for Make Benefit Once Glorious Nation of Kazakhstan:

Maria Bakalova should be nominated for Best Supporting Actress for Borat 2.

Watched the new Borat film. Some truly great laugh out loud moments. Sacha Baron Cohen is so good at pushing beyond the edge. Maria Bakalova really should win an Oscar. Outstanding performance.

Maria Bakalova deserves an Oscar nomination for her incredible performance in #Borat2. One of the best performances of the year. I know you don’t normally recognize comedic performances & films but that really needs to change. ❤️🎥🎞

Maria Bakalova should receive an Oscar nom for #Borat2. She’s fantastic and a true comedic revelation who goes toe to toe with Baron Cohen.

Watched Borat tonight. The real star of the movie film was Maria Bakalova's performance, the sage advice of Jeanise Jones, and the wholesomeness and tolerance of Judith and Doris in the synagogue.#Borat2 #BoratSubsequentMoviefilm pic.twitter.com/EaI617PELp

#Borat2 was amazing, but I think we can all agree that maria bakalova deserves to be a big star after her hilarious performance in this and I want to see her in more things now. pic.twitter.com/dzvNF2HZ8C

Maria Bakalova for best actress please and I’m not even remotely joking. One of the best performances of the year #Borat2 pic.twitter.com/dQtdNJHEuf

I just realized Amy Adams did all that work in Hillbilly Elegy to finally get her Oscar and now here comes Maria Bakalova in Borat to fuck it all up oh my god.

Maria Bakalova deserves an Oscar for pretending to be attracted to Rudy Giuliani. #Borat

Maria Bakalova swung for the fences and nailed it. She’s the breakout star of 2020 - and she has my support in the Best Supporting Actress conversation this year #Borat2 #BoratSubsequentMoviefilm pic.twitter.com/cdSuB15bRZ

Maria Bakalova should get an Oscar for the debutant ball scene alone. I almost shut my laptop out of sheer second-hand discomfort.#Borat

The more experience you have with comedy acting, the clearer this choice becomes tbh https://t.co/TwXNQBLEAV

If Maria Bakalova doesn’t win an Oscar for Borat 2 then what is the point of The Oscars?

Give Maria Bakalova an Oscar, you cowards.

Borat Subsequent Moviefilm: Delivery of Prodigious Bribe to American Regime for Make Benefit Once Glorious Nation of Kazakhstan is now on Prime Video.